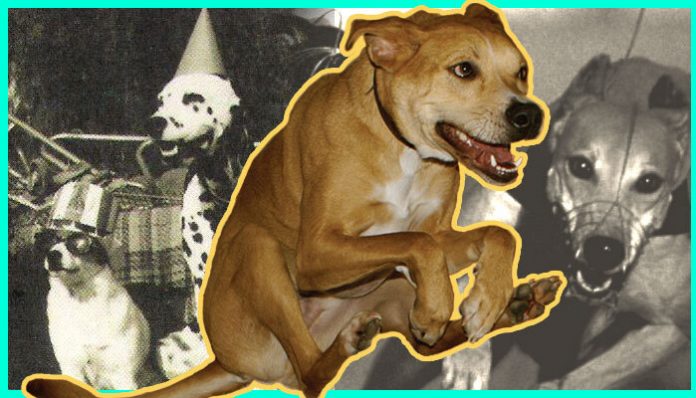 Let’s face it: This year has been terrible on many levels, but one thing remains eternally awesome: dogs. Fortunately for us, the fourth week of September marks National Dog Week. Not only do we get to celebrate our furry friends at home, but we can also use this time to help out local pet shelters through donations, fostering, volunteering and more.

Fortunately, some of our favorite acts in rock ‘n’ roll feature man’s best friend right on the front of their records. To celebrate National Dog Week to its fullest, check out 10 of our favorite album cover canines.

Read more: These 10 punk bands of the 2000s were underrated but not forgotten

Alice In Chains released their self-titled sludge-rock studio album in 1995. It’s also referred to as The Dog Record, Three-Legged Dog Album and Tripod. (We love dogs no matter how many legs they have.) Interestingly, drummer Sean Kinney even crafted the cover. As a kid, he remembers being followed and even chased by a three-legged dog named “Tripod” when he was a paperboy.

Big Sublime fans may recognize the Dalmatian on the cover of Jah Won’t Pay The Bills as Lou Dog, the unofficial band mascot. Frontman Bradley Nowell adopted the pup and brought him everywhere, featuring him in music videos and lyrics alike. He even walked around on the stage during shows. Lou Dog is such a celebrity, he has his own Wikipedia. You can also watch this cute music video dedicated to and featuring his face titled “I Love My Dog.”

Parklife remains an iconic U.K. rock album from the ’90s, with hits such as “Girls & Boys” and “To The End.” In the album booklet, you can see pictures of Blur hanging out at a greyhound racing track, as well.

Perhaps one of the most iconic dog covers for alternative music fans is Weezer‘s Raditude with this airborne good boy. Fun fact: This pup’s name is Sidney, and the photo appeared in National Geographic before gracing this album cover. Hit singles from the record include “(If You’re Wondering If I Want You To) I Want You To” and “I’m Your Daddy.”

The Replacements – All Shook Down

Alt-rockers the Replacements went out with a bang when they released All Shook Down as their seventh and final album. Though the names of these pups remain unknown, it’s understood that the cover art is a photo that was taken in Newport, Kentucky.

Snow Patrol – Ask Me How I Am

These two beach gods star on the cover for Snow Patrol‘s 2000 single artwork “Ask Me How I Am.” In perfect fashion, the track’s music video also serves as a POV for a day in the life of a dog. The track appears on their 2001 LP, When It’s All Over We Still Have To Clear Up.

Beastie Boys did fans a solid by putting all of their early tracks and live tapings in one place with Some Old Bullshit in 1994. These tracks certainly don’t sound much like the rap-rock present in hits such as “Intergalactic” and “Sabotage.” Instead, this compilation reflects their upbringing in New York City’s underground music scene, focusing on punk and hardcore. Not much is known about the cover, aside from the fact that we all want to pet him.

It may be one of the lesser-known Green Day releases, but look how iconic that face is. Released in 1990, Slappy served as the band’s second EP and gave us a glimpse into what the rock outfit would become. In fact, “Why Do You Want Him?” is a song Billie Joe Armstrong wrote at just 14 years old in regard to his mom dating a new person.

Seether caught this dog in a compromising position, but it worked perfectly for the cover of 2002-2013. This double album contains the band’s greatest hits all the way to rare demos and B-sides. Truly a treat for both music fans and French bulldog lovers.

Beck released his fifth album, Odelay, featuring a jumping dog on the cover in 1996. The record contains fan favorites such as “Devil’s Haircut” and “The New Pollution.” More specifically, the cover art features a Komondor, otherwise described as a Hungarian sheepdog, and this photo first appeared in the American Kennel Club’s Gazette in 1977.

How are you celebrating National Dog Week? Sound off in the comments below, and send us pics of your punk pup on Twitter!