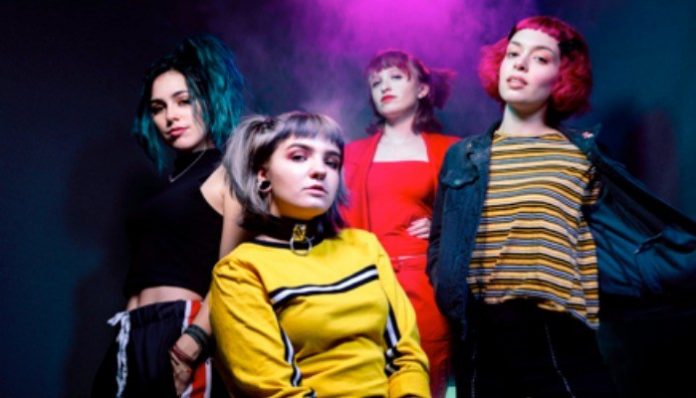 Six years ago, Doll Skin rolled out of the Phoenix, Arizona, desert with the aim of splitting the difference between punk, rock, pop and even a touch of metal into their fast-paced, raw, emotive music. Although they’ve been called “the millennial second coming of the Runaways,” Doll Skin—vocalist Sydney Dolezal, guitarist Alex Snowden, bassist Nicole Rich and drummer Meghan Herring—refuse to be placed into any kind of tidy box, creating music that is uniquely their own.

They unapologetically continue to destroy expectations with their latest album, Love Is Dead And We Killed Her, more evidence that pure rock fury has no age requirement. Since 2013, the band have been putting in the work to leave their mark on the punk world with their unbridled energy, passion and creativity. Love Is Dead—Doll Skin’s third album and their first release with Hopeless Records—comes just two years after the electrifying success that was Manic Pixie Dream Girl.

“It feels like we’re a new band now in a really good way,” Dolezal says. “Manic Pixie Dream Girl and In Your Face (Again) were both really great albums, and they have a place in my heart, but this album feels amazing.”

Considering the three singles the band dropped prior to the full album release (“Mark My Words,” “Empty House,” “Outta My Mind”), it was clear to listeners that Doll Skin weren’t going to hold back in any way. In this new era, the band revealed that they wanted to make a heavier album while still continuing to tackle mature themes such as politics, sexism and drug abuse. Love Is Dead does this particularly well in every capacity, but with a greater development in the band’s already impressive songwriting.

According to Dolezal, when the band prepare for every album, the members put together an inspiration playlist, listing every musician they want to channel into their next project.

“It was definitely very helpful to have that because if any of us were listening to a song, we were like, ‘Oh, I want to do this!’ and show the other girls,” she says. “I loved having it, and I definitely feel like it helped a lot with the writing process. There were a few heavy songs from a few heavy bands that we took more of a vibe inspiration from. There was a lot of Saosin, some Underoath and a lot of the Used, Flyleaf and Paramore. Nothing More was big for us too and obviously My Chemical Romance.”

It’s easy to see how these bands influenced Love Is Dead and how it affected Doll Skin’s growth into more self-actualized musicians. Dolezal says Manic Pixie Dream Girl was very telling as to where the members were in their personal lives regarding relationships. Although the new record continues to take on topics revolving around the band’s personal life and social issues, they made the choice to completely eliminate love songs.

Having titled the project, the band sat down to discuss what they envisioned for the album and in doing so came up with the motto that inspired its content: relentless, revenge, reaction. “Everything we wrote about is very relentless,” Dolezal explains. “It’s a reaction to something that happened to us or [something] we’ve seen in the media or anything like that. I definitely feel like those three words, those three ‘R’s,’ were really big in terms of coming up with the theme for the album. I think the songs that tap into those feelings the most are the title track and ‘Mark My Words.’”

Dolezal acknowledges this record forced the band out of their collective comfort zone and pushed them to write about other things. Consider “Your Idols Are Dying,” a look at drug abuse within the music industry and how it affects young fans. “It was really important for me to write this song,” Dolezal begins, “’cause we wrote about how all these younger people are looking up to different artists who are abusing substances and alcohol, how that affects them, and it’s basically saying, ‘Listen, your idols are dying. Don’t do what they’re doing.’”

Other tracks such as “Empty House” and “When They Show Their Teeth” encourage fans to find their worth, reminding them that they do have a place where they belong. Meanwhile, songs such as “Mark My Words” and “Nasty Man” dive into the band’s more sonically relentless side and focus on abuse, with the former taking the approach of gaining your power back, while the latter calls out celebrities who abuse their power.

One of the many things Doll Skin hope fans take away from their new music is that they should never be afraid to speak their minds and express themselves in a way that’s authentic and constructive.

“It is so important for young people to speak their minds, and I think it’s more important now than ever for our voice to be heard,” she says. “In terms of speaking out about different topics that mean a lot to us and just speaking your mind on all things political and not, my whole life I’ve been very lucky to grow up with parents that wanted me to speak my mind. I do know though that there are a lot of young people whose parents or environment basically enforce the ‘be seen, not heard’ idea. That is so detrimental to mental health and to young people in general [in terms of] how we grow up and how our future is laid out before us.”

Dolezal goes on to explain that from their perspective as young women in the music industry, they’ve watched many things happen firsthand that could be considered extremely scary. Because of that, the band have greater reason for advocating for more young people to join the music industry to spark change and make it a safe space where all can come and express what they want for the common good. With the way things are going for this band, mistaking these women for pushovers is the worst thing anyone could do.

“To me, a Doll Skin-dominated world looks like more young females in the music industry,” she asserts. “It looks like more young people in general speaking out, joining the music and entertainment industry and really making it a safe space. A world dominated by Doll Skin is safe, and it’s a place where we can all be a big family and look out for each other and stand up for what’s right and speak our minds freely.

“With everything that’s going on with transphobia, homophobia, reproductive rights and women’s rights and everything being so prominent in social media, now more than ever, we need to all stick together and make that change and really make things better for us and for our future.

Doll Skin are currently out supporting With Confidence alongside Seaway and Between You And Methrough mid-December. Beginning in March, they’ll hit the road with Anti-Flag. Tickets for all upcoming dates are available here with their latest Love Is Dead And We Killed Her is available here.

This feature originally appeared in AP issue #372, which marked the final Warped Tour issue. Grab your copy here or below.