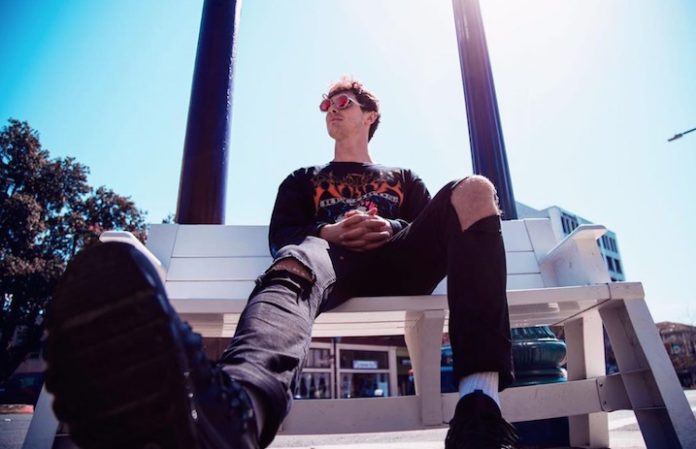 “I’d be more than happy for the internet to die.”

It’s a surprising revelation from Don Broco frontman Rob Damiani, who is more than likely in the minority with this opinion because the internet has inarguably become–perhaps sadly–the bedrock of today’s society. The prevalence and evolution of the tech ecosystem, has inspired the band to name their forthcoming album Technology, which is set for release in February 2018.

Despite longing for the online world to cease existing, the vocalist admits wholeheartedly that he himself has a form of tech-driven Stockholm syndrome and identifies (almost) as a prisoner, but succumbs all the same.

“I hate the modern smartphone,” Damiani says. “It’s incredible what you can do, but so much is expected of you. I can’t get out of bed in the morning. I have to check my Instagram, check my Twitter, reply to any messages. I waste half an hour to an hour every day. With any positive breakthrough in innovation, it can create so many good opportunities, and that’s what the human race does: We create things, but it always gets to a point where it starts having a negative effect. And we’re in that phase now where it’s a widespread problem–this culture where we don’t talk to each other anymore. We are on our phones constantly. It’s proven how addictive they are.”

The title track,was released as a single in July, and the music video focuses on how technology can completely dominate your attention–if you let it.

In the video, a fan has recorded Don Broco playing at a show on their smartphone, uploads it to a social media platform and then starts casually swiping through their account feed. An alien invasion breaks out and the end of the world is suddenly upon them, but the fan is so consumed with browsing that they don’t even bat an eyelid. It’s a tongue-in-cheek poke at how the audience at any gig can hinder the live experience for both themselves and the band.

“I totally get it–take a photo or a video to remember the night by,” Damiani says. “But as a singer, when I’m performing, I’m feeding off the crowd. Part of my performance is definitely relative to how sick the crowd are. If the crowd are giving me good vibes, I give them back even harder and it’s the feeling that we’re all together, which is what performing live music is about for me. I’ll be making eye-contact with the people in the front row, and there will be a few people who are on their phones for literally the entire time. They’re not paying attention to us at all. It’s so hard to get to the front of a show, to work your way through the crowd. They’ve got this prestigious barrier position for the entire gig and they’re squandering it on their phones!”

The other side of the coin is Damiani’s genuine adoration for the offline world of technology and where his real passion lies: namely video games, which stems back to his childhood.

“I wish I could play more games now. I just can’t find the time,” he says. “As a kid, I would get in so much trouble because my parents would send me to bed, then I’d sneak back downstairs, play all night and then it would be time for school. My mum would find me in the mornings still playing! I’m sure the adults back then would have been seeing me and my brothers playing Game Boy non-stop and said that technology completely ruined our childhoods. I guess it did in a way because we were playing all the time, but I’d like to think that I got more out of playing quality games like Pokémon or Zelda or Mario than kids would these days just going through Snapchat. You’re staring at this little screen for hours, but I still look back on those times as absolutely magical memories.”

Although Technology is not coming out until next year, Broco have made the unusual decision to start releasing singles off it, currently producing five already. (The first, “Everybody,” was released last year.) Breaking away from a dominant major-label machine and signing with indie label SharpTone Records has given the band the confidence and the power to put out what they want when they want, take measured musical risks and flex their collective creative muscle.

“As soon as we’ve got something we’re happy with, let’s get it out and keep it fun for our fans,” Damiani says. “People want to hear new stuff, so you can hold it all back and keep people waiting for the perfect time to release everything; or if you’ve got it, get it up online. The last album felt slick–we made an effort to make it a smooth listening experience, where it was all tucked in nicely. This album, we wanted to do the opposite. Musically, we wanted to make it as abrasive, as angular, as hard-hitting as possible. Deftones and a blend of heavier bands we grew up listening to in our youth are a massive influence on some of the down-tuned nature of the guitar parts, and there’s a lot of minimal modern dance music production. We weren’t afraid with this album. It still sounds like Don Broco, and if you’ve heard our last two albums, you’d know it’s us straight away. But from a musical approach, we took it from a very different angle than we have previously.”