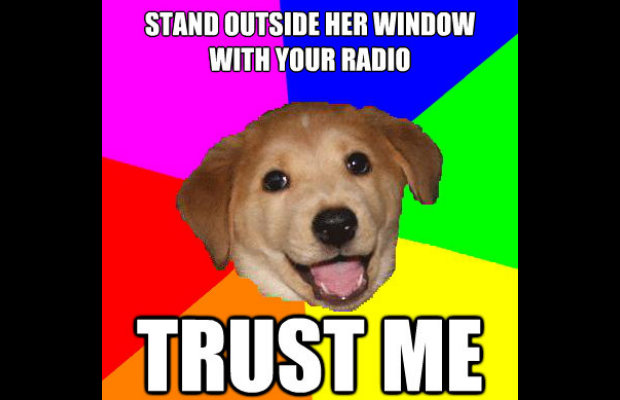 Lyrics are often highly metaphorical and definitely not meant to be taken literally. But sometimes that’s where your brain goes, and man do some artists have some rotten advice to give. Here are some instructions and actions we hope you don’t take and habits you probably shouldn’t form.

“Step one: Slit my throat/Step two: Play in my blood/Step three: Cover me in dirty sheets and run laughing out of the house…”

ADVISED BY: Alkaline Trio (“This Could Be Love”)
THE TAKEAWAY: Murder is a fun, totally acceptable way to show “love” and definitely okay if someone requests it and gives you the instruction manual.
THE CONSEQUENCE: Alkaline Trio have trucks and trains full of bad advice riddled through their lyrics (“Crack my head open on your kitchen floor/To prove to you that I have brains,” anyone?), but the chorus of “This Could Be Love,” their guidebook on committing a grisly crime of passion (and how to dispose of the body), contains a few steps you definitely don’t want to take if you value your freedom. [CW]

“I'm in a car underwater with time to kill/Thinking back I forgot to tell you this/I didn't care that you left and abandoned me/What hurts more is I would still die for you.”

ADVISED BY: Armor For Sleep (“Car Underwater”)
THE TAKEAWAY: Waiting out death by drowning is a good way to prove your point.
THE CONSEQUENCE: That whole death thing has to be more of a downer than whatever caused you to put your car at the bottom of a body of water in the first place. [RC]

“He took a shit in the bathroom tub and fed the dog brownie drugs.”

ADVISED BY: Blink-182 (“Reckless Abandon”)
THE TAKEAWAY: Congrats! You hosted a crazy party that everyone is going to talk about all day tomorrow.
THE CONSEQUENCE: You're the one who has to clean it up. I honestly wouldn't know what problem to attend to first. Who invited this asshole, anyway? [BJM]

“Then later on, on the drive home/I called her mom from a pay phone/I said I was the cop and your husband's in jail/This state looks down on sodomy.”

ADVISED BY: Blink-182 (“What’s My Age Again?”)
THE TAKEAWAY: Even though we’ve made vast improvements in the field of technology—making the very idea of calling someone on the phone an outdated notion—some jokes like the prank phone call never go out of style. (Read: Fucking with people is always fun.)
THE CONSEQUENCE: Well for starters, you’ve given some poor, unsuspecting mom a heart attack who now thinks her husband is in jail (and has some extra curricular activities she was unaware of). And you can pretty much say goodbye to any second-date prospects you had with said mom’s daughter. [BM]

“Party 'til you pass out/Drink ‘til you're dead/Dance all night/'Til you can't feel your legs.”

ADVISED BY: Bring Me The Horizon (“Football Season Is Over”)
THE TAKEAWAY: Andrew W.K., with added alcoholism is the way to go!
THE CONSEQUENCE: Dying from binge drinking is one risk, but if you can't handle that, then at least lose the ability to walk. Have some respect for yourself. [BK]

“We went to the Philly Pizza Company and ordered some hot tea/The waitress said, ‘Well no, we only have it iced.’ So we jumped up on the table and shouted, ‘Anarchy!’”

ADVISED BY: The Dead Milkmen (“Punk Rock Girl”)
THE TAKEAWAY: Punk-rock girls are so edgy and different, right?
THE CONSEQUENCE: That waitress is going to have her ear blown off by her boss later. Poor lady. And I'm sure they didn't leave a tip. [BJM]

“Let's drink with our weapons in our hands/Let's sleep in this trance.”

ADVISED BY: Deftones (“Rocket Skates”)
THE TAKEAWAY: The best parts of life are sex and death.
THE CONSEQUENCE: Ruined lives and bloodstains that won't wash off your bedding. Phil Hartman and Nancy Spungen were unavailable for comment. [JP]

ADVISED BY: Every Time I Die (“Bored Stiff”)
THE TAKEAWAY: Say vulgar things to all women.
THE CONSEQUENCE: I'm no pick-up artist, but I am sure no one would recommend advertising yourself as a cunt for a good first impression. That would be like playing life on expert mode, with no cheat codes or one-ups left. Exception to the rule: You're Keith Buckley and it doesn't matter what you say. [BK]

“Sleeping with the enemy/Seems to get the best of me.”

ADVISED BY: Head Automatica (“I Shot William H. Macy”)
THE TAKEAWAY: Keep your friends close, but your enemies closer.
THE CONSEQUENCE: Keep 'em too close, and you might wake up duct-taped to a chair in a building that's on fire. Not like I'm speaking from experience, but… [JP]

“I want a girl with lips like morphine/Knock me out every time they touch me/I wanna feel that kiss just crush me/And break me down.”

ADVISED BY: Kill Hannah (“Lips Like Morphine”)
THE TAKEAWAY: It doesn’t matter if a kiss causes injury, as long as it was fantastic while it was happening.
THE CONSEQUENCE: If you’re dating someone that knocks you out, every time they touch you then you should probably reevaluate your relationship. [RC]

“And that’s why I say/Oh no, not for me, not for me/Call it torture, call it university/No, arts and crafts is all I need/I'll take calligraphy/And then I'll make a fake degree.”

ADVISED BY: Relient K (“College Kids”)
THE TAKEAWAY: Who needscollege? All you really need is a few quick lessons on calligraphy and then poof! You’ve got your own bachelor’s degree.
THE CONSEQUENCE: College isn’t for everyone, and that’s okay. What isn’t okay is making your own degree—or spending the money you set aside for textbooks on tickets to Dave Matthews Band. At least blow that cash on a band worth seeing. Plus, we bet explaining the fake degree to your parents will make for one uncomfortable family dinner. [BM]

ADVISED BY: Say Anything (“Little Girls”)
THE TAKEAWAY: It’s perfectly okay to target small children when fits of anger consume your soul.
THE CONSEQUENCE: Jail. Possibly the death penalty, depending on where your slaying took place. [RC]

“I'm losing weight for you.”

ADVISED BY: You, Me & Everyone We Know (“I'm Losing Weight For You”)
THE TAKEAWAY: You should alter your body however possible to keep the one you love around.
THE CONSEQUENCE: Look, I'm a big dude—and over the past year, I made some serious changes in my lifestyle and diet and as a result have managed to lose nearly 70 pounds. Did I do it for my wife? No. I did it for me, so I could live a longer and happier life with her. She never ordered me to stop eating pizza and potato chips, but she's supported me along the way and that's what a true romance is all about. Don't change yourself for anyone but yourself, kids. [SH]