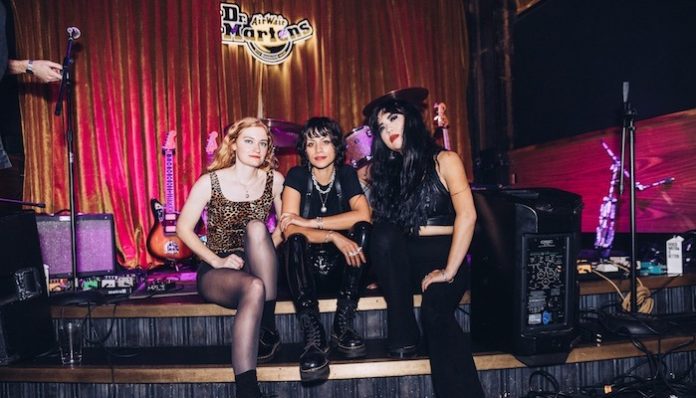 The next installment in the Dr. Martens micro-documentary series of great bands involves pointing the cameras at L.A. Witch. For years, the trio of all-girl desperados were fiercely independent, making things happen exclusively on their terms. They should probably make shirts that read “RIDE OR DIY.”

Since forming in 2009, L.A. Witch—vocalist/guitarist Sade Sanchez, bassist Irita Pai and drummer Ellie English—have put in a ton of sweat equity. Their intriguing, austere rock has a distinct edge while coming off downright narcotic, as if you’re trapped in a dream directed by David Lynch.

While that description might sound enticing and alluring, the members of L.A. Witch are quick to tell you how hard it’s been. The folks over at Dr. Martens picked up on that determination immediately.

“There’s all kinds of self-doubt,” Sanchez says. “You question what you’re doing is even sane at times. The first EP we had we spray-painted all the covers, and we sat there and burned all these CDs, one by one. The last tour we were on, this girl came up to be at the merch [booth], and she had one of these CDs. It’s moments like that that make you want to keep going.”

In 2017, the trio joined the roster of the respected indie label Suicide Squeeze, whose catalog includes releases from Elliot Smith, Minus The Bear, This Will Destroy You and many others. L.A. Witch’s 2018 self-titled debut captures their essence perfectly, equal parts sinister and sexy. What woman hasn’t felt the subdued rage found on the magnificently psychedelic “Kill My Baby Tonight”? But for all of their charm and slowly evolving mystery, L.A. Witch continue to work damn hard to keep their dream turning.

Check out Dr. Martens glimpse at L.A. Witch below, and get lost in their country-psych world.