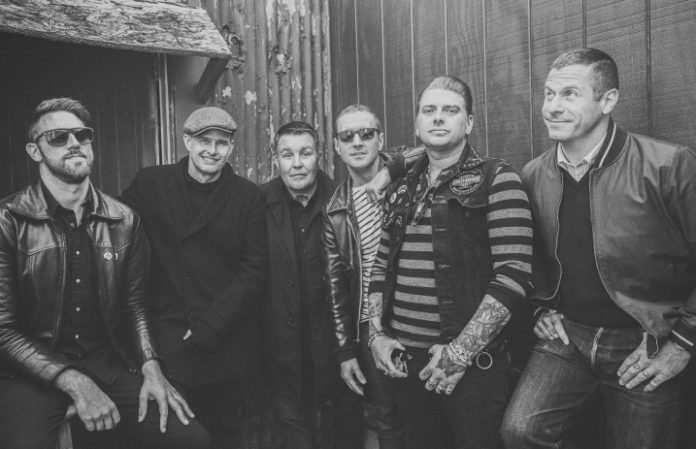 On the cusp of releasing their ninth studio album and embarking on another extensive U.S. tour, the Dropkick Murphys are making their biggest statement. 11 Short Stories Of Pain & Glory may draw from the band’s playbook of Irish-infused street punk, but its narrative drills deeper into the social conscience of their native Boston and the silent opioid epidemic that is rampant in the Northeast U.S. and venomously spreading throughout the country.

For founder Ken Casey, the idea of the band is greater than just the music—it’s a job, an organization that employs his friends and family, and a vehicle for community interaction, including the Claddagh Fund, the foundation he founded in 2009. The fund’s outreach looks to help those who struggle with addiction, a theme prevalent throughout the new LP. Currently, Massachusetts is experiencing epic opioid problems, posting a fatal overdose rate more than double the national average in 2014.

We spoke with Casey about how the band are using the album as more than just a tool to promote their name and stay on the road, but rather to ignite an important dialogue and awareness almost completely missing from this year’s presidential debates and election.

Recently on the Best Show they joked that the band Boston should be forced to change their name and the Dropkicks should have the honor. What do you think ingrained the band so far into the city’s culture?
Part of our taking on that role—being all about Boston—is the fact that you know it's a very college town. It’s sort of a “tale of two cities.” It's a college town—which often can be transient after four years—and it's also a very blue collar town. We felt like we were a band that was from here and really wanted to represent that. It was easy to fill our live shows, because we knew so many people from growing up there and living there. It grew organically like that, from cousins to friends to somebody else and the next thing you know, we were filling 800 capacity clubs.

As the band grew, getting involved with some of the sports teams—which you know was certainly not a ploy to build the band; we were just massive massive fans who wore that on our sleeves from the beginning—it was a way to connect. Then I think the charity work we got involved with in Boston really ingrained us in the city. I feel very fortunate to have that relationship with our hometown.

It’s interesting is how you said it’s a “tale of two cities.” Some people see Boston as very liberal, others see it as working class and conservative. Is it a push/pull between the really collegiate atmosphere in Cambridge and the more working class environment of the city?
No, I think the blue-collar community is mostly pro-union and non-conservative politics. Obviously, that's not across the board for everybody, but being from a blue-collar background, I was raised a Democrat. Blue-collar, a little more “center” Democrat, but it’s not a push/pull. You can go back to the old history of Boston’s race problems, but I think that was just a completely different time and place. A lot of that was driven by division in the way that every ethnic group was so segregated from each other—that breeds fear. I think that those days are so gone and I really don't think those racial issues ever really reflected the overall political climate of Boston as a whole.

“I just assume part of this is due to the drug companies lobbying. They’re the real drug dealers, if you ask me.” ​

As a band that’s been touring for so long and seen so much of the U.S., do you see this “divided nation” that the media often portrays?
I don't really see it. To be honest, I don't pull up to do a show in Montana and get out in a coffee shop and ask people who they’re voting for. [Laughs.] I don't see this climate of “build the wall” everywhere I go. I think everybody who stumbles in the door of a Dropkick Murphys show knows where our political leanings are and what we've sung about for years, but we've always kind of ascribe to the idea of practice, don't preach—to leave it in the lyrics, because when I was coming of age or whatever, if someone said, “Do this,” I wanted to do the opposite. I feel like if we just be who we are and we say what our message is, that’s more adaptable to someone then saying, “If you voted for Trump, get out of this concert!” I don't think that is a message that works well with most people.

I don't see the divide. Ironically, on this tour we’re playing Arkansas and Mississippi—those are the last two states we haven’t played, so we'll be able to say we've played every state. Ask me after we’ve played them and I might have a different answer. [Laughs.]

I will say, sometimes, because of the pro-military support of actual soldiers coming back, there’s definitely an element of the crowd that has come in and been surprised when they hear that we aren’t right-wing Republicans. They say, “What? But you guys support the military!” and I explain that I support a kid that has to go to the military because it is a choice in life, then comes back and gets shit done for him and is left high and dry. I support the military defending our sovereignty—I just wish we’d meddle in other countries’ business a bit less.

“Nothing's going to change until our Congress and Senate can't be bought and can't be lobbied—where drug companies or oil companies can't make the decisions for the country.”

I think the easiest thing to do is write an anti-Trump or anti-Hillary song, but the difficult thing is simply to write a song that creates a dialogue—that’s really the seed of punk to me. I think that’s missing a bit right now.
My overall opinion of politics in the election in general anyway, is that they're all millionaires and the bottom line is that none of them really care. Whoever's president is not going to change anything. Now we've got a new, more crazy millionaire…billionaire, whatever, hiring all his billionaire friends and nothing is going to change. Nothing's going to change until our Congress and Senate can't be bought and can't be lobbied—where drug companies or oil companies can't make the decisions for the country.

That really opens up something I know is central to the new album—the massive prescription drug and opioid problems in the Northeast and the country in general. Having lost so many friends and family, do you see a commonality in those who end up in that cycle of abuse?
I don't know the reasons. Why does one area have a massive crystal meth problem and Massachusetts doesn’t? I do know that there were kids from Boston via pill farms in Florida flooding New England with easy access to opiates—the OxyContin and stuff. Then of course on a nationwide issue, you have doctors who are prescribing a kid who's a good kid, an athlete or maybe a soldier who got hurt. Instead of getting 10 OxyContin, check back with me in two weeks—[he gets] 150, check back with me in six months. Couple that with its availability on the street and couple that with its rising price and heroin's declining price. Left with no choice, most people make the switch because it's cheaper, and now it's cut with fentanyl and kids are dying at such an alarming rate.

There's no rhyme or reason to it—it’s not the kid that's been the troublemaker his whole life or whatever. The band's lost family members—I've lost so many people. I just sang at one of my really good friend’s funerals. It is literally nonstop. It’s overtaken handguns, it kills more than  melanoma now. Why is it not front-page news? I just assume part of this is due to the drug companies lobbying. They’re the real drug dealers, if you ask me. Now on top of it, the recovery business is becoming a billion-dollar business—these rehabs. I feel like half of the rehabs make their money on repeat customers. Do they really want to see success?

Do you feel like just sharing that loss with fans can help? Is that a start?
We'd be foolish to think that we could make a change in reality. But any time someone's talking about it, it opens eyes. The whole inspiration for deciding to start the album with “You'll Never Walk Alone,” is that I was sitting in my car after a wake and it all randomly came on shuffle—you know, the old Gerry And The Pacemakers version. I'm just sitting there listening to that song, thinking about it and thought, “I want to do this for the record and I want to be an anthem for anyone dealing with it.”

Whether it's just family, whether it's someone who's addicted, there is help in that if you're able to get help you need to give  and don't don't ever give up on somebody. The song “Dead End Kids” is about that, because once someone gets to that point, people write them off as a hopeless cause. The new model in Massachusetts is “harm reduction.” [It means], “He or she is never going to straighten out, so let’s put them on Suboxone or one of these low dose opiates, like methadone basically and keep them as a zombie for the rest of their life.”

“The band's lost family members—I've lost so many people. I just sang at one of my really good friend’s funerals. It is literally nonstop.”

Speaking of the narrative of 11 Short Stories Of Pain & Glory, a lot of bands don’t come from an era where an album was an actual story, broken up between Side A and Side B, rather than a playlist. Do you still approach making a record this way, especially with a theme like this one?
Absolutely. Look at the title. That's always been the case with us. To some degree, it's swinging back in that direction, where people are buying vinyl again. Even when nobody was paying attention to that element and even if they never do, we still make them that way. Whether it's for us or whether it's for the few people who appreciate that. Maybe it was just what was ingrained in our heads coming up. That’s what a record is, you know. That’s one of the most special parts of it, so to turn away from it is kind of weird to me.

I think we all use music as escapism and on top of that, the Dropkicks not only give people that escape and comfort, but with the community and charity work, you take it further. In all of that, what do people recognize as the hard part of being in this big band?
You know, it's the best job ever. However, with young kids, the hardest part is that it takes you away from the kids for so long—although a couple of mine are getting old enough that I can bring them along. That’s the only real challenge. We find ourselves on the road more than we’ve ever been and I love it. But you know, in a perfect world, I could beam myself home on one of those Star Trek things so I can see the kids. If that's your biggest complaint in life, you're doing pretty good. Who knows? The way things are going, maybe they’ll invent one of those soon. alt