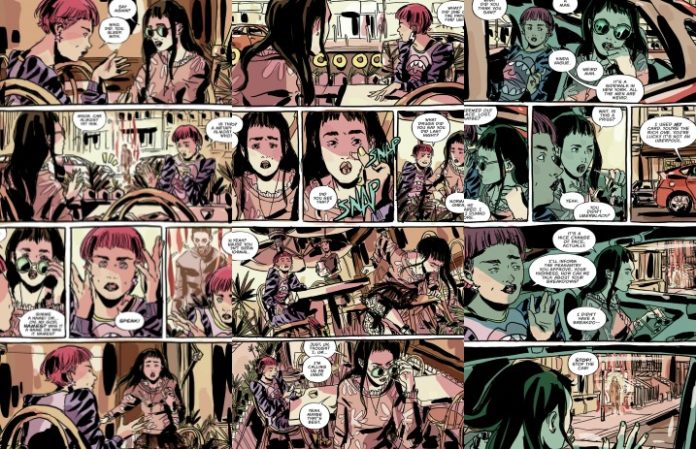 Patrick Kindlon, the vocalist and brain behind the lyrics of punk/hardcore bands Drug Church and Self Defense Family, has been making comics for the last seven years. With the help of Black Mask Studios owned by Matt Pizzolo (Godkiller), Steve Niles (30 Days Of Night) and Brett Gurewitz (Bad Religion), Kindlon’s new series There’s Nothing There will be hitting the streets April 26.

There’s Nothing There is a raunchy horror comic analyzing the dark reality of celebrity worship and the idea of being trapped in it. Jonathan Diener talked to Kindlon about the creative process and transitioning from musician to comic creator.

“Like, I’ll tell anybody, if we get an offer for a big tour we should say yes to and I don’t like the way the wind is blowing that day, I’ll just say no.”

“It’s a total hinderance in some respects,” says Kindlon. “Because I came from a type of music that there was no hope of ever making money off of, I’ve been quick to become the, ‘F U Guy.’ I don’t feel like I need a scene or the support of my peers, because there’s no way to win. Like, I’ll tell anybody, if we get an offer for a big tour we should say yes to and I don’t like the way the wind is blowing that day, I’ll just say no. That’s how I’ve been able to conduct that part of my life because nobody is making any real money, so to hell with it. I’ll tell everybody to go to hell.”

Kindlon’s writing partner, Matt Rosenberg, was the owner of Red Leader Records (Strike Anywhere, Polar Bear Club). After growing tired of dealing with the ups and downs of the music business, Rosenberg approached Kindlon with the idea to make comics together. The duo aimed to reduce the standard 10-year timeline of being an unpaid writer and share writing credits to expedite the process.

“There’s more NBA players than there are paid comic professionals. It’s a super-small field and what you say to one person in whatever position will come back to bite you when they’ve moved up a position or have ingratiated themselves to these other people,” he says. “That is a totally different world for me. Friends that went into corporate life instinctively get this. I’ve dodged it most of my life.”

The two worked together to create We Could Never Go Home, the book Black Mask published, and jump-started their careers with two years ago. However, living with the punk-rock ethos can only get you so far in the business world, and it was a bit of a shock when the people around him, including Rosenberg, played the game and got brought up to write for Marvel.

“He picked up on the political nature of the thing way before I did,” explains Kindlon. “He did all of the conventions and put in all of the work and I thought this should be a meritocracy and people should care about the quality of just our work. I was totally wrong. People need to see your face. Editors need to feel like they have a connection with you as a person. It’s such a small field with thousands of people trying to break in everyday. You being personable really goes a long way. That part for me was really difficult.”

Now, Rosenberg is writing both Rocket Racoon and Kingpin for Marvel, as well as continuing with indie comics. For the time being, Kindlon is sticking with Black Mask as he tries to make up for lost time.

“You know those musicians after a show who will shake people’s hands for an hour and have those connections with them?” he shares. “That’s not me at all. I like to hide immediately after I play. If it’s warm enough, I’ll go for a walk some place. Let me just be honest: That likability is just something I don’t have.”

This was the perfect segue into talking about There’s Nothing There. The protagonist, Reno, is a celebrity constantly in the public eye. Whether it’s by the paparazzi or via social media, everyone has to know everything she’s up to. When you throw the darkness of Kindlon’s brain into the situation, you get one hell of a horror story.

“I saw Laurence Fishburne at Whole Foods and he couldn’t even walk 25 feet. He’s not a Kardashian, he’s just a very talented actor. It got me thinking about the idea that you couldn’t escape human contact and how deeply upsetting that might be. In the same way solitary confinement makes people insane, being constantly inundated by other people’s expectations of you in the form of them needing to see you and interact with you feels terrifying to me. I really wanted to try my hand at some horror and the scariest idea I could think of was not being able to detach from people in a meaningful way. That’s what There’s Nothing There is about.”

Kindlon recalls Drug Church opening for Touché Amoré on tour and their vocalist, Jeremy Bolm, being very open to meeting his fans. He would meet everyone he could after the shows and really make the connection. Touché fans would tell Bolm he saved their lives with his music or open up about their own personal traumas.

“You’re talking about your terrible home life and I’m thinking burritos. I’m not qualified to be anything other than what I am,” he says. “That sort of thing is scary for me and I understand that it’s not scary to other people. There’s no escaping your personal brand and that’s actual horror to me.”

Once There’s Nothing There is finished as a series, it’s getting pitched to film and television by the publishers. Kindlon and Rosenberg’s We Could Never Go Home was already sold to television, and they plan a follow-up to the book next year.

“After that wraps there’s a new book I’m working on that’s Deliverance meets The X-Files that’s called Nobody Is In Control and will probably start in the fall on Black Mask. They’ve been very supportive of the really different directions I want to go with some of these books. I also started a relationship with Run For Cover to publish a couple of things. That’s for the really wild independent work that needs a home outside of comic shops. Then musically there’s a new Self Defense LP, Drug Church has a new EP coming out and we are really looking [at] another LP coming out in late 2017.”

Although he’s still getting a grasp on becoming a face in the comic world, Kindlon has no plans of slowing down in the process.