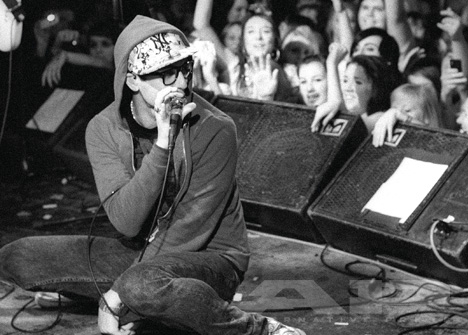 Gabe Saporta has been running his mouth for most of his life, let alone his latest career as a funk-rocker du jour. Here’s some pearls of wisdom from the Cobra commander’s mouth that didn’t make it into AP 239. Oh, and Al Gore, if you’re reading, um, sorry ‘bout that one paragraph…

THE WHALES ARE FINE, SAVE THE SCENE
“I always thought of music as revolution. In the first Midtown EP, I have this full-page diatribe about how the scene should be about music, and to offer something different from the mainstream. A place where ideas could flourish. I learned all my ideals from punk rock, and I wanted to make sure that kind of thing endured, so as the scene got bigger, it didn’t lose those qualities. That just alienated people, both fans and people who were working with us. People were like, ‘Kid, stop your bullshit. We’re trying to sell your record here.’ It was very discouraging to me, and it brought Midtown into our own little vacuum of a world.”

ON “SELLING OUT”
“You want people to hear your music, you want to be successful, but at the same time, you’re so cautious about undermining the integrity of what it is you’re making. It’s so fucking weird: Hip-hop dudes don’t have that problem; they talk about all they want to talk about from day one, and they just want to get as big as possible. They’ve got no issues about that stuff. It’s purely a white-college-boy problem. My whole vibe is I’ve always liked pop music. If I can be a part of pop culture, that’s fucking sweet.”

ENVIRONMENTALISM? YEAH, WHATEVER…
“I’m a vegetarian, but I hate environmentalism. It’s so self-righteous. We’re a little speck of dust in the history of a planet that will live for five billion years, and in the course of that, we’ve existed 10,000 years or whatever it is, and we might exist another 10,000–maybe even 100,000 years–but we’re just a flash in the pan. We’re not going to kill the earth. We’re like a little bug on the earth that’s causing a fever, and when the earth has a fever, it’ll cool itself down and do whatever it needs to do to get rid of the virus. It’ll get rid of us, but we don’t need to save the earth. Save the planet? It’s bullshit. There’s just this self-righteousness in environmentalism that disgusts me, and makes me not want to be a part of it. So I don’t give a fuck about environmentalism. I do my best to do my part and be self-conscious, but I don’t talk about that shit at all. To me, it’s searching for a cause because you don’t have one.”

HIS SCENE POLICE RETIREMENT SPEECH
“I’ve seen other bands get really big, and it was frustrating to me, because I felt like they weren’t deserving of it or whatever. But instead of judging and hating and being spiteful, why not just embrace it without judgment? The minute I stopped judging and stopped having expectations was when everything started going well for me.” –As told to Brendan Manley