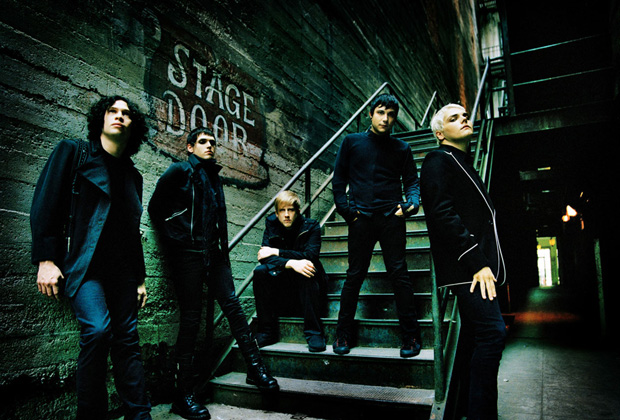 MY CHEMICAL ROMANCE are putting the final touches to their follow-up of 2007’s majestic The Black Parade. During a break in the studio, guitarist FRANK IERO recalls some of the great highs and lows he experienced during their break. Some of those experiences–good and bad–revolved around writing, recording and touring with his side-project, LEATHERMOUTH, whose debut album XO, appeared on Epitaph earlier this year. The good was that he honed his home-recording skills, did a lot of writing (which has helped inform MCR’s next disc) and became a maniac frontman while Leathermouth were on tour with REGGIE AND THE FULL EFFECT during the summer of 2008.

The bad? Well, as the guitarist has made clear in interviews, Leathermouth are his vehicle for unfiltered ranting (i.e. “Sunsets Are For Muggings,” “Your Friends Are Full Of Shit”). But it was track No. 4 on XO, “I Am Going To Kill The President Of The United States Of America” (about George W. Bush), which earned Iero a visit from the Secret Service. Wondering what happens next?

“The government comes to your house, searches everything and talks to your wife for hours,” says Iero, adjusting the sleeves on his hoodie. “Then you have to get a real expensive attorney to keep you out of prison for five years. I had a long talk with the gentlemen of the Secret Service. [It was the] straight-up dark suits, sunglasses, Men In Black-vibe–I thought they were going to do the mind-erase thing [like in the movie].

“They said, ‘Why did you write the song?’ And I told them the truth. I was on tour [overseas] with My Chem at the time, and every time I turned around, there were Anti-American rallies. I wrote a song from the standpoint of the rest of the world. It wasn’t from my personal point of view–it was just from someone who sees warmongering going on. I wrote the song, and the title is as blatant as humanly possible, because I wanted it to be that way. The Secret Service asked, ‘Do you think someone is going to hear this song and kill the president?’ And I said if they’re going to kill the president, they’re going to do it without listening to this song. That’s like saying everyone who reads Jonathan Swift’s A Modest Proposal is going to eat a baby. They didn’t think that was too intelligent, so they said, ‘Well, if you re-release the record with the song on it or perform the song live ever again, you’ll be arrested.”

What’s really perplexing about the whole incident is how the agency even learned about the song in the first place. Iero says he’s not sure who it was, but opines that it was a British writer who contacted the Office of Homeland Security looking for a comment. Clearly, Iero could’ve turned the whole thing into a massively public freedom-of-speech argument; now, he’s just happy the whole thing is behind him. “I’m married and I want to have kids,” he resigns. “I don’t want to go to jail for five years.” —Jason Pettigrew