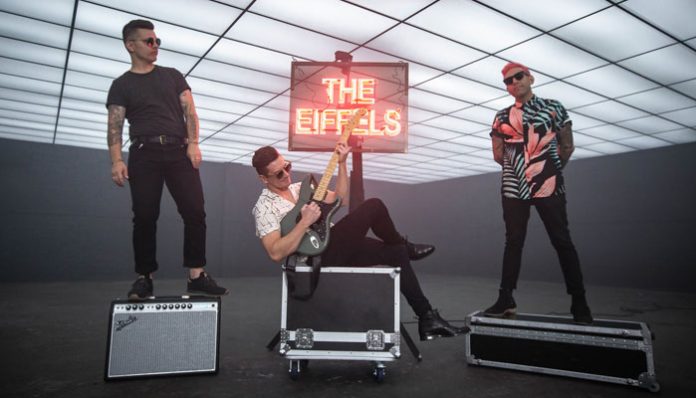 Tomorrow (July 24), The Kissing Booth 2, the sequel to the teen rom-com franchise, premieres on Netflix. Fans will be tuning in to see how the relationship between Elle Evans (Joey King) and Lee Flynn (Joel Courtney) plays out. But if said fans are into cool sounds, they’ll be pleased by “More,” the single from L.A.-based pop-rock trio the Eiffels. AltPress is premiering the lyric video for the song, rendered in cool animation that complements the track’s positive vibes.

“More” originally appeared on the band’s self-titled 2015 debut EP. But if you ask anybody who was around then, the Eiffels’ throwback synth-pop feels like 1982. New-wave affectations, driving rhythms and sublime synthesizers make this a key track. What makes “More” alluring is its stirring positive lyrical focus (which we can all use) and the sheer vivacious energy. That mix has gotten the Eiffels’ everything from tour slots (2018 Warped Tour, Plain White T’s) to key song placements.

Read more: These iconic movie samples made an impression on your favorite bands

Eiffels frontman Sean Ulbs discussed the sonic and visual motives behind “More,” as well as the mindset that makes his band truly ones to watch.

Are the Eiffels a rock band in nicely tailored pop couture or vice versa?

SEAN ULBS: Coming from rock bands growing up, I would definitely say the former. We have that in our roots, but we love a good pop song. I think that dynamic comes across even more at our live shows. Our favorite artists are the ones who find ways to combine those two elements in cool ways.

What came first: “More” the song or The Kissing Booth 2 opportunity?

“More” was a single off The Eiffels EP. It wasn’t until later that we were contacted about The Kissing Booth 2. They reached out and said they had the song in mind for a couple of scenes. Coincidentally, when we first released “More,” it was met with comparisons to The Breakfast Club soundtrack. So we got a kick out of seeing Molly Ringwald in the cast.

Is “More” about a growing relationship or a personal philosophy/hope to do better, be greater and find a purpose?

To me, it was the latter. It was about a persistent drive and feeling like you could meet the challenge to be better. But that means different things to different people, and sometimes the idea of growing relationships and doing better are one and the same. So when hearing it paired with The Kissing Booth movies, it really worked well.

How did the animation come about? The idea of no facial recognition is a really great look. Is that subtext?

At this point in time, our options are limited with social distancing, etc., so we realized it would be a great time to create an animated video. It’s something we’ve wanted to do for some time. Maginpanic had some rad work that we really liked, so we connected and worked out the video. Although the animation is based on The Kissing Booth movies, we liked that the lack of facial recognition opened it up for broader interpretations.

The Eiffels really capture that synth-laden early ’80s era magnificently. What is it about that particular pop sensibility that the band find attractive? Your take on synthetic pop is both anthemic and vivacious. That’s a tricky thing to pull off.

Thank you. We’ll have to quote you on that! I think it comes from an affinity for both anthemic punk and ’80s pop. We started playing in punk bands, and I think the writing process still has that spirit at its core. There are infinite great ballads, but in general, I’ve always been more of a fan of high-energy music.

The Kissing Booth 2 premieres on Netflix July 24. You may seek “More” for your life with the Eiffels below.