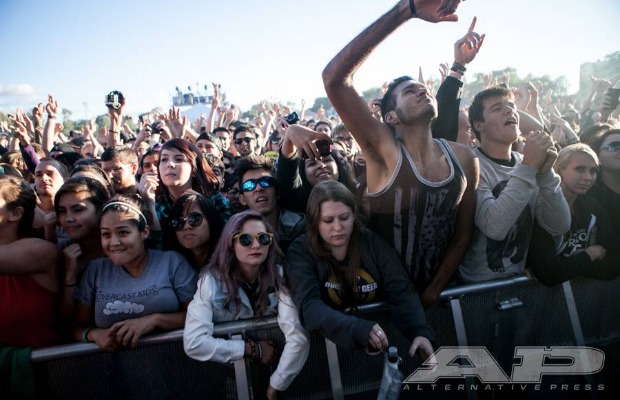 Last week, I found myself perched at the front of the line for a Taking Back Sunday show (a ritual my best friend and I have shared since we were in high school.) The next people to arrive on the scene were two teenage girls whose youthful antics gave me that all-around “teenagers-scare-the-living-shit-outta-me” feeling. My best friend looked at me and questioned, “Were we like that?” The answer to that is always “Yes. We were.”

At the end of the day, we’re all in the same boat. We love the same music but express it differently with time. So, here’s a quick reminder of how we differ to understand and help each other more readily.

1. ALL OF US: Fan hierarchy is imaginary.
When you discovered the band. How many shows you’ve been to. How many songs you’ve memorized. How many posters are on your wall. How many T-shirts you own. How crazy you go for the band when the lights go down. Here’s a secret: None of it fucking matters. Do you like the music? Does it make you feel something? Cool. Welcome to the club. [Handshake.] End of story.

2. OLDER FANS: You, too, felt the need to prove yourself.
When younger fans tell stories in a social setting, their voices tend to project. They tell their stories loudly, because they’re not sharing them for their friends’ benefit; they’re letting the world know they have experience. Elder fans may be tempted to roll their eyes at their stories or tell them to hush, but you must remember that this behavior is something they’re doing because they might be intimidated by you and are trying to earn your respect. It’s their version of a small child telling you to watch them perform a cartwheel over and over. They just want to be acknowledged and respected.

3. YOUNGER FANS: We have stories, too, but we tell them quietly.
My best friend told me the first time she saw Taking Back Sunday (circa 2003) there were two older girls in front of her in line who sat in silence, barely even talking to each other. Meanwhile, she and her friend romped, yelled and squealed the whole day. They couldn’t comprehend it then, but at the latest show, we found ourselves in the shoes of those formerly incomprehensible girls. It’s not that we’re jaded or any less excited than you. Our favorite bands are still as important to us as ever, we’ve just learned the value of treasuring and keeping things to ourselves.

If you ask, we might tell you we’ve seen the band 33 times, but how would that benefit you? It’d probably just make you jealous. We don’t want a prize, and we don’t want to hurt your feelings. Plus, we’re tired. Just really fucking tired. All the time. You’ll see.

4. OLDER FANS: Your music taste was just as “bad.”
Unfortunately, most people reach a music discovery threshold. When you’re young and exploring, you want to check out everything, and you have a youthful, loving attachment to the things that introduced you to the music you love. As a result of “refining” your tastes, you accept fewer and fewer bands over the years and may often find yourself saying things like, “2004 was the only good year for music.” You’re going to feel like the fans just keep getting younger and like the music keeps getting worse. While young people are always going to flock to our scene, the music–if you know what to look for–is no better or worse. It’s just different.

I remember being 14 and rolling my naïve eyes at all the older fans who seemed to only listen to music from 10 years prior and thought it was the end-all, be-all while telling me My Chemical Romance were the worst piece of steaming garbage they’d ever heard. So, when you say, “I wish it were 2003. I hate all this metalcore crap,” that’s how you look to younger fans now: antiquated and out-of-touch. >>>>