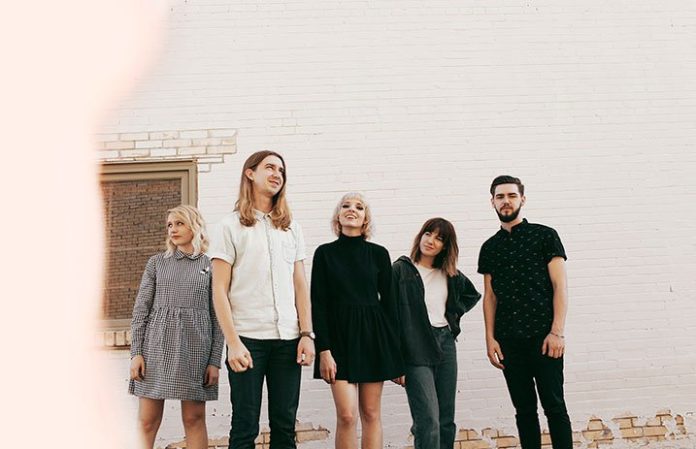 In 2015, guitarist Chauntelle D'Agostino and keyboardist/vocalist Stacy King decided to depart from Eisley, leaving vocalist/guitarist Sherri DuPree-Bemis and bassist Garron DuPree as the main members in the band. For many groups, these departures would be a mortal wound. However, Eisley's fifth studio album, I'm Only Dreaming (out Feb. 17 on Equal Vision) is as magical and engaging as the rest of the band's albums. “When You Fall” conjures ’90s dream-pop acts such as the Cranberries; the brilliant, surging standout “A Song For The Birds” features shimmering guitars and a passionate vocal guest spot from DuPree-Bemis's husband, Say Anything's Max Bemis; and the R&B-influenced “Sparking” boasts a backdrop of oceanic keyboards. Elsewhere, I'm Only Dreaming amps up the tenderness: The sparse “Rabbit Hole” is a tranquil lullaby on which DuPree-Bemis croons “I love you” throughout, while another highlight, “Louder Than A Lion”—a song she wrote to her children as a reassurance she'd keep them safe at night—features Anthony Green.

Unsurprisingly, DuPree-Bemis tells AP that I'm Only Dreaming in part was her “[proving] to myself that I could make a great record on my own.” Recorded with producer Will Yip, it also was a way for her to stretch her vocal and songwriting talents. By all accounts, this has been a rousing success. In fact, DuPree-Bemis says there's talk of an Eisley acoustic record, and the band plan to track more B-Sides with Yip soon.

This increased musical output is a byproduct of the new, streamlined lineup. “Even though [the departures were] really sad for me, it's made it a lot easier to be more productive, since it's fewer cooks in the kitchen,” DuPree-Bemis says. “It's easier for me and Garron to get in the studio and make more music for fans.”

DuPree-Bemis is indeed grateful to Eisley's loyal fans, who she says have been completely understanding and supportive during the band's transition. “They've all been so cool about it,” she says. “I feel like all of our fans really know our family, because we're very transparent people online, and we always have been. Everyone has kind of moved through the whole thing with us, and really [been] kind and accepting about it.”

Accordingly, Eisley's upcoming tour with Civilian and Backwards Dancer (which kicks off Feb. 16 in Houston) will feature a mix of older fan favorites, songs off of the band's last album, 2013's Currents, never played live before and (of course) plenty of new songs. “I'm really proud that we pushed and made this record despite all the stuff that we were going through.”

What did you want to achieve with these songs as you sat down to write them then? What were your inspirations?
SHERRI DuPREE-BEMIS: All the songs written for this record happened after things were changing within the band. Everyone was moving on and starting to get settled in their lives [and getting into the] next phase of our lives. You know, like having kids and [getting] married. And you know, it's trying to figure out how to survive financially. [Laughs.] That was around the time everyone was like, “I wanna move to Nashville” or “I think I can't tour anymore.” So it was all very scary.

I thought for a minute there that I was going to lose Eisley, and that was very scary for me. I never had imagined ever not doing Eisley, you know? I realized, “Okay, I can keep doing this.” I had a lot of encouragement from everyone in my family and my other band members and siblings. Everyone was just telling me, “You don't have to stop doing it. You can keep doing it. Why would you stop just because we can't?” and I was like, “Oh! Okay!”

After I wrapped my mind around that, that's when I started writing songs for this record. There was a lot of pressure on me that I put there on myself, just because now I was the sole songwriter, and I never had to deal with that before. I always shared songwriting duties. After I pushed through all the self-doubt and fear, it got a lot easier.

Luckily, I didn't actually have to do it on my own. Garron DuPree, my cousin, ended up co-writing a couple of the songs with me, and he wrote these amazing musical pieces, which are two of my favorite songs.

What kept you moving forward with the project and not doing it under your own name? Why was keeping the Eisley name so important to you?
Ever since I was a kid, this has been our band. Eisley has just been such a big part of my life. I've never wanted to do a solo project or anything like that. I felt like writing the songs under a different name would just be confusing and pointless, just because I have a certain style, and that style is Eisley.

I'm a very sentimental person, too, so that was probably some of it. When faced with losing [Eisley], I was just kind of shellshocked. I never saw there being an end to this in my life. It's just everything that I want to do creatively, so I feel very, very blessed that I had everyone on the record rallying around me, and lifting me up, and being like, “You can do this.” Otherwise, I probably wouldn't have pushed through.

Was it difficult to get started writing songs by yourself? How was the process?
The songwriting process didn't have to change very much. It was just that I had to write more, because I was the sole songwriter other than Garron. He was a big help in helping me co-write a few of the songs and, like I said, [wrote] some of my favorite songs on the record.

The last couple of records that we had done together, the whole band, we wrote on our own, anyway. We wrote our songs separately and then fleshed them out together. But [then] also it was more like, “Okay, these are the songs that I have,” “These are the songs I have” [and] “Let's pick and choose what are the best ones to make a record from.” But for me it was really a change; I had to have more material than I'm used to having to write.

What things were really inspiring you this time around?
Definitely the fact that I have two daughters now. I have some songs on there that were inspired by them or about them. I think you can't help but write about being a parent and having children once you have them. I don't think people will put on the record and not be able to relate to it if they don't have children. My writing style, I tend to cloak things and they sound whimsical. It doesn't sound too specific. It's not something people won't be able to wrap their minds around if they don't have kids.

And it's not all about my kids. I have songs about my husband, songs that were inspired by other people in my life, friendships and other people I saw hurting. Anything that basically touches me on a deep level, it helps me to write a song about it. Or that's what comes out naturally. I'm always inspired by my relationships and the people I know, or the people I love, seeing them go through things, whether it's good things or sad things.

I'm very bonded with the people I have around me. I'm very empathetic, and I can really sense what they're going through. That really comes out in a lot of my songs.

“It was the most fun I've ever had recording a record, and that's saying a lot because I love my siblings, and we always had a great time together.”

This record is very cohesive sonically, despite being very diverse.
I do tend to write songs that are maybe kind of little over the place. But having Will [Yip] come in, and Garron too…Those two [came in and helped] me kind of shape the songs and the structure and sonically made a big difference in pulling it all together and making it sound so cohesive. It was so much fun. It was the most fun I've ever had recording a record, and that's saying a lot because I love my siblings, and we always had a great time together.

I think Will brings that out of people.
That guy is a straight-up genius. He's so young, but oh my gosh, just to see him work and watch his mind work when he's listening to it. I want to work with him again. I think I learned a lot from him, too. He pushed me so hard vocally, like with the vocal takes. I never wanted to punch someone so much. [Laughs.] But at the end of the day, they were my favorite vocal takes ever.

Musically, was there anything else you wanted to do on the record?
We did try to be conscious of the fact that, “Okay, we have to be able to play this live.” So I think we didn't try to overdo it too much. Not too many layers of things, and not too many harmonies. I think on Currents we did a lot of that. [This record] is a little more simplified, musically. That was a challenge, because I always want to slap more vocals, more harmonies and just layer, layer, layer. Will kind of reined me in on that.

“It never became something that I was less passionate about. It only became more and more prominent in my life and my heart.”

How has Eisley changed for you over the years? What did it mean to you then, versus what it means to you now?
As a kid, when we first started out, it was like, “Oh wow, I get to write my own music and be in a band, this is so fun.” As it slowly evolved, I started seeing how it's affected people's lives, and how important it was for my own life. I think it just kept steamrolling into something that I was more and more passionate about. It never became something that I was less passionate about. It only became more and more prominent in my life and my heart.

It does something for people, and that is what's important to me. It's important to fulfill my own creative desires and to write these songs and to get them out there and be able to sing them live. Singing is, like, my favorite thing ever. But hearing the stories of how it touches people's lives—and how it kept them from taking their own lives or people naming their kids Eisley because we brought them together as a couple—that kind of stuff blows my mind. So that's why I keep doing it. Because what else is there in the world that I can do? At least I'm doing something positive and helping people in some way. alt

I'm Only Dreaming comes out Feb. 17 via Equal Vision Records. Preorder it here.