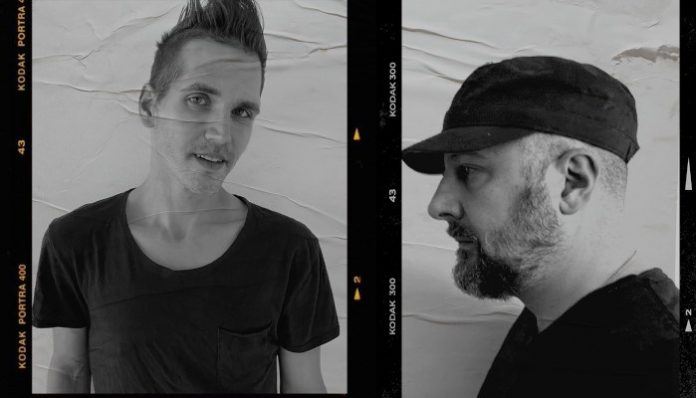 Electric Century‘s highly anticipated sophomore album is just weeks away. In the meantime, however, Mikey Way and David Debiak are offering us a taste of the upcoming era with lead single “Till We’re Gone.” The track drops on streaming platforms tomorrow, but you can hear it now exclusively via Alternative Press.

Navigating the tumultuousness of romantic reconciliation, the track showcases the duo’s progression in their signature synth-laced alternative sound.

Electric Century’s self-titled record is dropping Feb. 26. Produced by My Chemical Romance‘s Ray Toro, the album builds off the foundations established by For The Night To Control with added stylistic elements. Way describes the record as “bigger and much more dynamic” than its precursor, noting that fans of the first album should enjoy the developments.

Accompanying the record release is the Electric Century graphic novel, which is due out Feb. 23. Created in coordination between Way, Toby Cypress and Shaun Simon, the book will be released via Z2 Comics. Though a noted “companion” to this musical iteration, the plot is conceptually independent.

You can stream “Till We’re Gone Below.” Way caught up with Alternative Press in an interview ahead of the release. Read on for the details behind the track, comic book and Electric Century’s sonic progression.

Read more: Meet the baker behind these My Chemical Romance sweets

Electric Century’s sophomore album is due for release later this month. How does “Till We’re Gone” represent this next iteration?

The idea is for this record to feel like a sequel to For The Night To Control in a musical sense. We feel like we achieved that in a much “bigger” fashion and then fine-tuned it.

How do you think it showcases your progression as a band over the last few years?

“Till We’re Gone,” which is the opening track on the record, is what we were sonically going for with the first record. We just didn’t nail it 100%. This entire record is musically and sonically exactly what we want it to be, and we are really proud that we got it there.

You previously described this song as “a track about seeking redemption through love.” Can you expand on this theme? What was the motivation behind it?

The inspiration for the song comes from a friend that was separated from a woman for some time, and she waited for him. When they were finally reunited, they had to reconcile the past while building an amazing new life together.

Read more: QUIZ: Can you match these musicians to their TV debuts?

Without spoiling too much, could you explain how the track might relate conceptually to the Electric Century graphic novel?

The interesting thing about the record and the graphic novel is that they are completely autonomous of each other. They are equal companions to each other at the same time.

What inspired you to release this graphic novel alongside your sophomore self-titled record? How did Toby Cypress and Shaun Simon help you to recognize this vision?

It was pretty serendipitous. It was always a dream that Electric Century were simply a fictional band that existed in a fantasy setting. When Z2 proposed the book idea, it presented the perfect opportunity to see that come into reality. The songs are all pretty cinematic.

Shaun is one of my best friends, and we are both really great at getting ideas out of each other on projects. We discovered [that] very early on in knowing each other. When Z2 showed me [Toby Cypress]’ artwork, I knew he was the person for the job. His art had this perfect storybook quality with a little bit of grit. I am very proud of both sides of the project.

What was it like working with Ray Toro on this forthcoming record? Were there any differences between collaborating with him in a producer role versus as a bandmate?

All bias aside, I think that Ray Toro is a musical genius. We both speak this different language and know what each other mean at all times in the studio. He’s at the top of his game and in a league of his own.

Read more: 10 references you might have missed in My Chemical Romance’s lyrics

How did his involvement influence the direction of this release?

He helped shape these songs in a big way by building the musical soundscapes and really thinking outside the box on songs from the demo phase. Also, having his guitar playing and solos all over the record doesn’t hurt anything. He has an incredible sense of what part is called for and when. He’s such a brilliant musical architect.

How do you feel that the self-titled album compares to For The Night To Control? Where do you think fans will appreciate foundational similarities and stylistic evolutions?

This is definitely the spiritual sequel to For The Night To Control. [It’s] simply bigger and much more dynamic. There are familiar moments combined with things that we weren’t afraid to try this time. There were no rules. If you were a fan of the first record, we are hopeful that you’ll love this one.

Beyond this single, which track are you most looking forward to sharing with your audience?

“Alive.” That, to me, is the emotional anchor of the album. It helped to shape the rest of the songs. It is the song that grew the most from its demo phase and really set the bar for the rest of the demos. I think that it was also the first song that was written after For The Night To Control, so we had a very long time to sit with it. I used to listen to that demo on repeat. It’s just that one for me. I am also a huge fan of “Oh Mary.”  It is special.