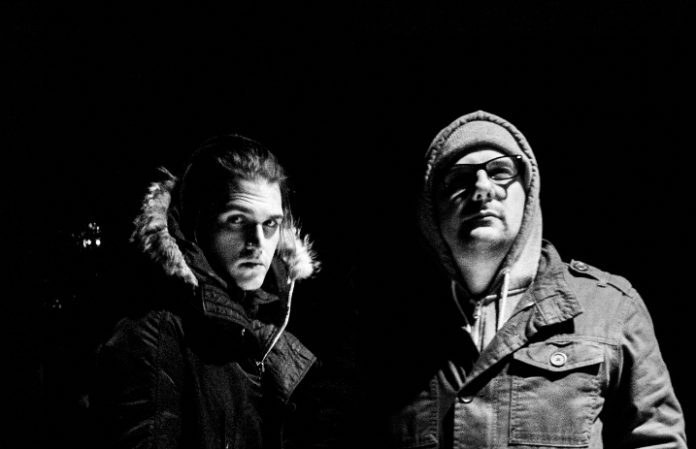 Electric Century—the duo of former My Chemical Romance bassist Mikey Way and New London Fire’s Dave Debiak—will finally have their debut album, For The Night To Control, given a proper domestic release. After circulating the world in various iterations, the record will officially be released on physical formats by Panic State Records on July 14. Produced by D. James Goodwin, the record is teeming with rich vocal melodies and ambitious electronic arrangements, sounding like something absolutely familiar and something completely alien, simultaneously. It’s a description that makes the duo smile and give each other a “mission accomplished” high-five.

Read more: Mikey Way opens up about My Chemical Romance: “The tail end of MCR was so dark for me”

Listen to the premiere of Electric Century's “Hey Lacey” below:

“At its core ‘Hey Lacey’ is about lust and passion between two people who aren’t interested in the complications that come along with having a committed relationship,” Debiak says. “A lot of the songs on For The Night To Control touch on lust and addiction and ‘Hey Lacey’ combines both worlds. It really plays into the record’s themes of intense desires and how sometimes they can be unhealthy even if they don’t seem that way at first.”

Way adds: “This is one of the tracks we worked endlessly on. We must have had 50 different versions of it! We tried everything from a ‘Super Pop Top 40 version' to an 'Eddie and The Cruisers version' before we finally landed on the one on the album.”

Debiak and Way spoke to Jason Pettigrew about breaking from their previous musical endeavors, the sound that ricochets through their heads and the (sometimes) terrifying memories conjured by ’80s radio hits.

For The Night To Control has been floating around the planet for about a year now but is finally getting a proper American release with a new song (“You Got It All Wrong”) added. Did you go back to the original master recordings and tweak things one last time?

MIKEY WAY: We had to make some tweaks because it’s coming out on vinyl. Going back and listening to the songs on a vinyl format kind of reinspired us again on the next batch of songs we’ve been working on. We’ve written demos for at least two more albums and we haven’t even touched it. That’s the beauty of working with Dave: [the inspiration] comes fast and it comes often.

You two live on opposite sides of the country. How does that affect your songwriting?

DAVE DEBIAK: The writing process usually consists swapping voice memos back and forth. We did actually write one song in the studio at the same time together. It was “Right There.” Fifteen minutes and we were done.

WAY: [Laughs.] We wrote one song in actual physical proximity of each other. Imagine what we could get done if we were in the same state!

Your debut album could’ve been a box set.

DEBIAK: Funny, a few years ago, I went out there to visit Mikey and take some meetings. We sat around playing guitars for hours and didn’t write one song.

WAY: I was in a shit spot when you came out here. I was somewhere else.

DEBIAK: We had played for hours and nothing happened. The next time we’re together for 15 minutes, we have a song. I guess that’s how the creative process happens. Sometimes it’s not meant to be. That’s why voice memos are great: I can write a song at 11 o’clock my time and send it over to Mikey and the next thing you know we’re tossing ideas back and forth. So morning, noon and night we’re working on stuff.

WAY: Any time you’re up, I’m probably up because of the three-hour difference.

Beware, Dave: Now that Mikey is a dad, he’s up for those 4 a.m. feedings and is ready to write.

DEBIAK: I got a text from him real early the other day and I was wondering “Why is he texting me now?”

For The Night To Control is an interesting album because considering Dave’s background in New London Fire and Mikey’s time in My Chemical Romance, it doesn’t sound like your previous work. It doesn’t rock at all: It’s very rich melodically and everything feels like a potential anthem. But when the songs don’t sound like anthems, they could be club tracks, with big beats and sequencer lines. For instance, “Someone Like You” sounds like the Chemical Brothers remixing Pink Floyd’s The Wall for club play.

WAY: Well, you get it. You understand this album. Can you interview us all the time? [Laughs.] You wouldn’t think those things would be connected, but there they are. The Wall was a big record for me, and when the Chemical Brothers dropped that Noel Gallagher track (“Setting Sun”), it completely changed the way I looked at things.

DEBIAK: That was a huge influence on D. James, who produced the record. We went to him with the idea of making something that sounded like the first New London Fire album [I Sing The Body Holographic], only more electronic. Mikey had some very specific ideas as to how our sound should be and D. James just dialed it right in.

When you were making For The Night, was there a conscious decision to not do anything that had defined your previous output?

DEBIAK: We thought, “Let’s go make this electronic record,” and we went into the studio with this mindset. We didn’t consciously sit around and say, “Let’s not do this and let’s not do that.” D. James was so locked into what we wanted to do that he was able to do it on the fly. I’m in awe of that guy: I’ve been working for him for years and every time I work with him, I tell him my idea of what I want sonically and how I want it to come out and he’s always adapted to that kind of sound.

WAY: He was able to decipher references to sounds, feelings and songs. He got what we were talking about at all times. I think somewhere, I was trying to make the Trainspotting soundtrack. It’s a highly eclectic mix of songs and somewhere in the recesses of my mind, I wanted to make an album that would come off like a Trainspotting sequel. [Laughs.]

DEBIAK: There is some wiggle room on the album. We have an album that has “Hail The Saints” and “Live When We Die” on it. Those songs couldn’t be more different from one another, yet they fit on the same record.

Do you see the next album riding that balance of melodic songs and electronic textures? Or do you want to keep the process open-ended?

DEBIAK: I sent over three new demos to Mikey the other day and they’re more or less in the same ballpark as this album. I do think it takes people a few albums of working together before you can step back, look at it and say, “Okay, that’s what we were going for.” It’s not an automatic thing as it is capturing a vibe.

WAY: Dave is one of my favorite musicians. He can literally finish all of my musical sentences. You need to have a rapport with someone to make those things work.

You two like a lot of different stuff and have some opinions. What kind of electronic music makes you run out of the room screaming?

WAY: [Pauses.] With excitement, you mean?

No. As in, “Please turn that shit off, I want to go on a tri-state killing spree.”

There’s very much a lush ’80s vibe going through the album. New Order has been discussed in previous interviews as a touchstone, but it sounds more lush, bands like When In Rome and Fiction Factory. Where does that come from?

WAY: You know when you hear songs from childhood that are like a repressed memory? You know, like they make you feel weird when you listen to it and you don’t know why? That’s something I’m attracted to. Like that song “Holding Back The Years” by Simply Red. I’m attracted to things that make me feel a strange repressed memory from childhood. “Red Red Wine” by UB40 makes me feel strange when I hear it, but I love it so much.

DEBIAK: I remember riding with my mom in the car listening to “Everybody Wants To Rule The World” by Tears For Fears, and one of those squeegee guys was trying to clean the windshield and my mom was yelling at them to go away. I don’t know why.

WAY: I want something that makes me feel like that on the next album. I like a song that reminds me of something on the radio while I was being driven to kindergarten. And then I think, “Aww, I don’t want to go to school today…” [Laughs.] It was “Take On Me” by a-ha.

Does Electric Century have a mission statement?

DEBIAK: I want to be somebody’s future repressed childhood memory one day.

WAY: I have one! It’s called Serotonin Rising. [Laughs.] Dave, I sent it to you!

For The Night To Control is due out July 14th via Panic State Records and can be preordered here.