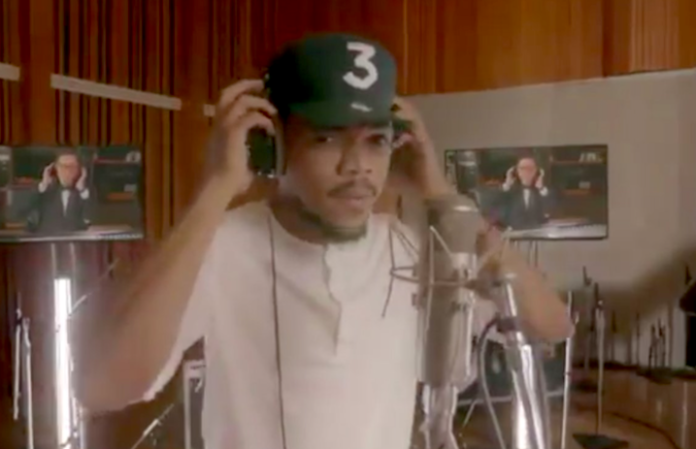 Awards shows have a long history of using the stage to make a political statement. While this used to be an uncommon choice, hosts and winners alike have pushed it toward the expected over the past year.

The 69th Emmy Primetime Awards continued that trend and kicked down any thought of subtext from the word “go.” Stephen Colbert securing the spot of host, while unsurprising given he’s the new late night top dog on CBS, showed how willing the network was to dive head-first into the political waters.

Colbert continued his musical partnership with Chance The Rapper, reminding viewers that while television is fun and it’s important to honor people who dedicate their lives to a craft that brings joy to millions, we can’t forget about the injustices claiming the lives of people every single day.

Colbert captured the reason for the turn toward politics during his monologue: “No matter how you feel about the president, and you do feel about the president, you can’t deny that every show was influenced by Donald Trump in some way,” he said. “All the late night shows obviously, House of Cards, the new season of American Horror Story, and, of course, next year’s Latin Grammys hosted by Sheriff Joe Arpaio.”

Politics has always been a difficult issue to broach with friends and family, but the current administration has made it necessary. Anyone who’s paid attention to their actions for even a moment can find something to worry about and fight against, and the stars of the Emmys weren’t about to shy away from that conversation.

Trump has a long history with the Emmy awards, most recently brought up during one of the debates with Hillary Clinton. Alec Baldwin, who won his award for Best Supporting Actor in a Comedy Series, didn’t miss his chance to fire another shot at the pride of the President.

“At long last Mr. President, here is your Emmy.”

The three stars from the 1980 comedy 9 to 5 took the plot of their movie, three secretaries who take their revenge on a sexist, tyrannical boss, and flipped it around to continue the Emmy’s political theme in full force.

.@LilyTomlin, @DollyParton, and @Janefonda take a not-so-subtle jab at Trump at the #Emmys pic.twitter.com/Vl33e4oxS2

The Outstanding Writing for a Variety Series category

This year’s nominees — Full Frontal with Samantha Bee, Last Week Tonight with John Oliver, Late Night with Seth Meyers, The Late Show with Stephen Colbert, Saturday Night Live — could be condensed down to the students from the schools of Lorne Michaels and Jon Stewart. Each show found mass appeal by focusing on and relentlessly attacking the political climate that consumes the world, and nearly every nominee in this category saw their overall ratings, as well as their YouTube viewership, make a significant jump.

The political stance the show took didn’t always work. Sean Spicer, Donald Trump’s former press secretary best known for lying to the American public and hiding among but not in the bushes, is on a media tour to paint himself in a better light.

He doesn’t deserve the chance to step on stage in a recreation of Melissa McCarthy’s portrayal of him (on SNL) throughout his time as the sixth-shortest tenure serving press secretary in American history. He worked for an administration that publicly called Nazis and white supremacists “fine people.” He worked for a man who announced his candidacy for the nation’s highest office by calling Mexicans rapists, criminals and drug dealers. He spent 182 days lying to the press and to the world. Sean Spicer doesn’t deserve a redemption tour.