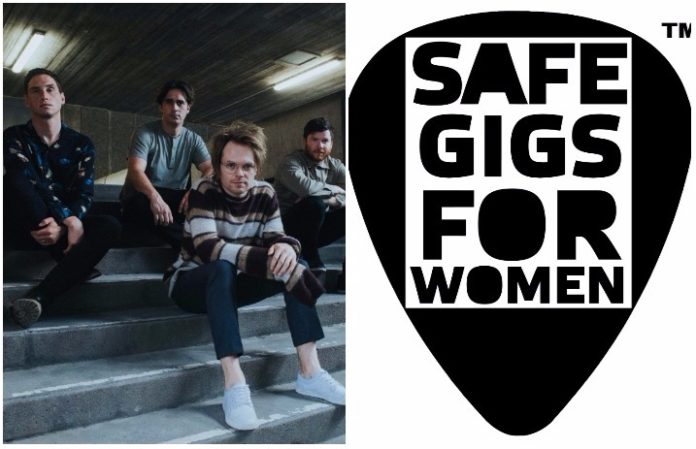 2017 will forever be known as the year that an unprecedented number of victims of sexual misconduct came forward and revealed the truly horrific nature of their respective ordeals.

It began in the entertainment industry in Hollywood and slowly bled into the music scene, other industries and smaller communities.

The movement saw esteemed alternative rock band, Brand New, cancel their final three scheduled shows in the U.K. and Ireland after frontman Jesse Lacey was publicly named on a Facebook post as an abuser. The band pulled the trio of gigs, and Lacey issued a statement attempting to explain his past behavior.

More recently, Don Broco vocalist Rob Damiani was accused of mistreating a fan some years ago, which he has strongly denied and has fought back by subsequently enlisting his legal team to handle the matter. Singer Melanie Martinez was accused of rape by a former friend just last week, which she has responded to twice, refuting the allegations on both occasions.

In the wake of what can only be described as something of a crisis, electronic rock outfit Enter Shikari are boldly stating that sexual misconduct will not be tolerated at any of their gigs by bringing the initiative Safe Gigs For Women out on the road with them during their latest U.K. tour.

“It’s something that’s becoming more thought about now,” says Enter Shikari vocalist Rou Reynolds. “People are getting awareness of that cause in general, and we want to do our bit to accelerate it. We’re pretty lucky, really. Our audience is relatively trouble-free, but it’s good to promote that thinking. It feels like more and more confidence is building as people come out and say something. Then it gives those who have also gone through—whatever horrible thing—confidence to come out and say that as well.”

Like many of us, Reynolds recognizes that while we want to believe every victim, we can’t all play judge, jury and executioner at the same time. “It’s a really bewildering landscape at the moment, and you don’t know where to tread and who to believe,” Reynolds says. “Ultimately, I think it’s a good thing, but hopefully people aren’t wrongly accused. That’s the thing—it only takes one person who has some reason to be pissed off with the band, to just make something up on Twitter; it gets shared and the band’s dead. The ‘innocent until proven guilty’ goes out the window and, in a way, you agree with that. A lot of the time, these people are in positions where they don’t have any evidence; they’ve buried it in the back of their mind for years, and it must be a horrible thing to bring up. So you don’t know where to stand on a lot of it.”

Safe Gigs For Women started up two-and-a-half years ago when founder Tracey Wise was sexually assaulted at a hometown show of her favorite band. She spent the rest of that night thinking that the unsavory encounter was her fault for a multitude of reasons and decided that she wouldn’t go to gigs anymore. The next morning, she woke up with a change of heart. Music and gigs were her biggest hobby outside of work, and she was not prepared to give it all up because of one vile perpetrator. “It was a way of getting a good thing out of a bad thing, and it’s grown into something,” Wise says. “We go to festivals, we work with artists, we talk to venues, bands, gig-goers and anyone who’s involved in music and gig-going to work to prevent sexual assault in live music.”

Wise acknowledges the revelations from this year, and while she sympathizes with each and every victim, their contributions are clearly valuable to collectively implementing change on a global stage. “Momentum’s in our favor,” Wise says. “Sexual assault and sexual harassment have gone on and been ignored for far too long. We work on proactively trying to prevent it happening in the first place. We ask venues to put in guidelines and policies and ask bands to say they don’t want that stuff in their mosh pit before it even happens. But at the same time, we’re very much in support of education that tries to challenge the behavior that’s let sexual assault and sexual harassment go on so long. We’re massively in favor of increasing consent education at school.”

Though they’re called Safe Gigs For Women, Wise says when you improve the situation for women, you improve it for all; and if you make a better environment for one person, you make it better for everyone. Men also are welcome to approach the organization if they have an issue they want to discuss, and Safe Gigs For Women even have male volunteers because they believe that if men are part of the problem, then they should be part of the solution. “If a man calls out a guy for being inappropriate, then it changes the tone of the message, and it actually might give that guy another reason to be more reflective on their behavior.”

Safe Gigs For Women has simple advice for anyone who wants to participate in making shows a safer place for everyone: “If you’re a gig-goer, don’t be a bystander,” Wise says. “If something doesn’t look right, don’t ignore it. What can you do to make that person’s experience of that night better? It might just be going up to that person and asking if they’re all right or if they need some help or going to get someone more qualified than you, such as security, to get involved in that situation. Don’t ignore something if it doesn’t look right.”

Though there’s still plenty of ground to cover and a lot more important work to do, Wise has hopes for 2018: “Sexual assault and sexual harassment is finally being spoken about in the mainstream media, and I think next year will be the year that we can try and get music really talking about this issue, really making the focus about gigs and festivals that everyone can be included and safe at.”

For more information about Safe Gigs For Women, you can visit their website.