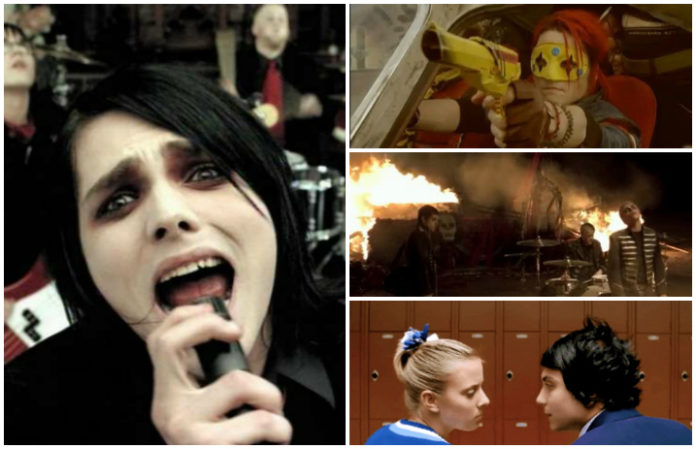 Remember when we ranked the music videos of those lovely chaps in All Time Low and Twenty One Pilots? Well, now we’re doing it for the gone-but-never-forgotten heroes that are My Chemical Romance! Gerard, Frank, Ray and Mikey were always known for combining their music with thrilling visual spectacles, so sit back, relax and enjoy this countdown of every video My Chemical Romance ever made!

We’ll be honest, we put this one in last place partly because we’re still not over the fact that they’re gone. Seriously, guys, please get the gang back together! This video-come-trailer compiles footage from the various music videos shot throughout MCR’s illustrious career. One to stick on when you feel like reminiscing.

17. “Honey, This Mirror Isn’t Big Enough For The Two Of Us” (I Brought You My Bullets, You Brought Me Your Love)

A lot of things are pretty weird about this video, but the big question we’ve got is: Gerard, what the fuck are you doing with your tongue at 1:16?

This orchestral reimagining of the Danger Days single was released to benefit the victims of the 2011 Tohoku earthquake and tsunami. The best thing about this video is the sheer volume of art the band’s fans contributed. Proof, if ever it was needed, that the MCRmy are one of the most creative and devoted fanbases out there.

An iconic song, no doubt, but this isn’t the video you associate with My Chem’s breakout single. Before the school uniforms and croquet—more on that later—“I’m Not Okay” was visualized in the form of early tour footage of the band.

QUIZ: How well do you know the lyrics to “I’m Not Okay (I Promise)”?

14. “Vampires Will Never Hurt You” (I Brought You My Bullets, You Brought Me Your Love)

Face paint, feverish playing and heaps of drama, MCR’s debut video was a sign of what was to come from the band. Gerard’s performance here, in particular, is evidence of a future star just beginning to discover his abilities as an artist.

Filmed at London’s Islington Academy and featuring hundreds of the band’s fans, the video for Danger Days’ third single is a visualization of the illegal raves Gerard speculated would take place in the dystopian world of the Killjoys. Where do we get a ticket?

12. “The Kids From Yesterday” (Danger Days: The True Lives Of The Fabulous Killjoys)

Like “Fake Your Death” before it, “The Kids From Yesterday” is a montage video, produced by the band and fan Emily Eisemann, who impressed My Chem with her own rough-cut of the video enough that they brought her in to help on the official thing. Yet another example of the MCRmy’s power.

It’s the ultimate emo heartbreak anthem, and the video for “I Don’t Love You” echoes the emotional devastation of the song. A proper tear-jerker.

A partial tribute to Pink Floyd film The Wall, the video for “Teenagers” has got gas masks, cheerleaders, confetti and rioting students—everything you need to party, MCR style.