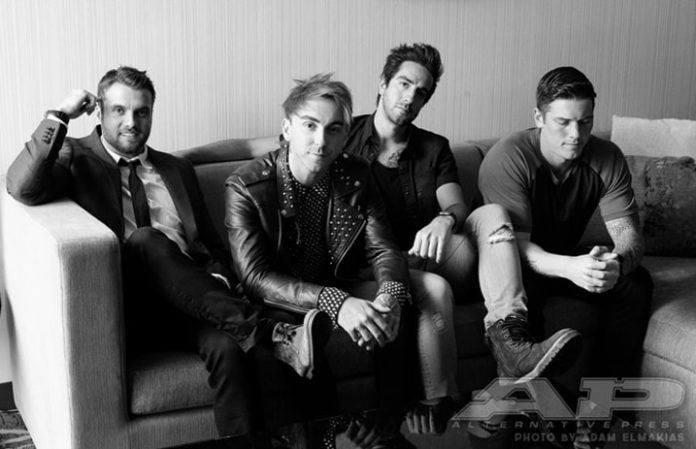 All Time Low kicked off the Back To The Future Hearts tour with support from Sleeping With Sirens, Neck Deep and ONE OK ROCK earlier this month, but that isn’t the only thing the headliners have been up to in October. Head below to review your favorite moments and catch up on the ones you may have missed.

Huge thank you to @riandawson for coming in and lending his skills on the drums to the last few #AndyBLACK songs on the record! What a supremely talented and nice guy! I also enjoyed chatting NFL stats with him. We are nearing the end of tracking and I couldn’t be more excited with what we have created! Photo by: @alliesaurousrex mastermind wizard @johnfeldy

Andy Biersack has been hard at work on his debut solo album, and he enlisted the help of Dawson on a few tracks with the producer John Feldmann (5 Seconds of Summer, All Time Low) at the controls. Dawson recently signed to Self Titled Management as a producer, so it looks like he will be gracing more artists with his presence on other projects in the near future.

Clearly the duo hit it off enough to discuss their hometown teams the Baltimore Ravens and Cincinnati Bengals. You know, because rivalries.

Alex Gaskarth and Jack Barakat’s live Idobi radio-show-turned-podcast is taking the beauty of their onstage banter, and just cutting away the performance. Think of it as a warm-up to prepare you for the full show.

The band announced in September that they would be involved in the project, but Gaskarth gave all the details you’d been waiting for: how it was inspired by the screenwriter’s real-life fan girl daughter to how important Cartwheel and Instee (stand-ins for Tumblr and Instagram) are in this movie’s pop-punk scene.

Barakat embraced the blurry, drunk night out photo-op in a bar he owns and then did the only logical thing by then posting it to social media for all to see.

Oct. 3, 9 p.m.: Fan Girl premieres on ABC Family
Don Draper’s daughter ditched the shift dresses and go-go boots for Glamour Kills tees … and a dress … and a crew neck. Kiernan Shipka channeled all of our 15-year-old selves in this real life portrayal of Tumblr fandom as an aspiring filmmaker just trying to get the attention of her #MCM.

Oct. 5, 6:04 a.m.: “Weightless” is nominated for “Greatest 21st Century Rock Anthem”
The leading single from 2009’s Nothing Personal is up against the likes of A Day To Remember, Blink-182, Bring Me The Horizon, Fall Out Boy, Paramore, You Me At Six and many more for MTV Rocks’ Rocktober-inspired contest.

In Orlando for a week. Tryna get my Harry Potter on

The band’s first stop on the Back To The Future Hearts tour was Orlando, Florida and it was destined to be magical before they ever hit the stage.

I’m sure the internet has never been more stoked about boxes being loaded into a Rockstar Energy Drink truck than right now.

We’re all clearly going for the dance moves, right?

Killed my laptop with a glass of wine last night. RIP little buddy 🙁

Oct. 7, 3:29 p.m.: Gaskarth murders his laptop
Apparently it was Tipsy Tuesday in the Gaskarth household.

If this is just rehearsals, we can’t wait to see the live show (because clearly there was no editing in the making of this video).

So happy to announce that we’ll be playing at the #R1TeenAwards for @BBCR1!!! pic.twitter.com/HdtrhFfZEa

They’ll be hitting the stage with 5 Seconds Of Summer Nov. 8 at The SSE Arena in Wembley, which is basically every pop-punk fan’s dream.

All Time Low hit the road with Sleeping With Sirens, Neck Deep and ONE OK ROCK—a lineup guaranteed to fill venues with hordes of screaming fans.

Did Kellin Quinn and Gaskarth call each other ahead of time to color coordinate their skinny jeans for this tour video…or did it just work out that way?

Hell of a way to start off the tour. Also love this new set list. Whole buncha fuck yeahs

There will be a lot of profanity. The fans are shocked.

The University of Central Florida’s CFE Arena gave the guys a DeLorean!

Oct. 11, ?:?? p.m.: Jack twerks
Barakat gave Miley Cyrus a run for her money on the Charlotte, North Carolina, stop of the tour. The only difference obviously being that she had a foam finger and he had a guitar to balance.

Gaskarth and Barakat’s podcast has the duo playing chubby bunny within the first few minutes of its season five premiere. Clearly we’re all in for an interesting season.

This is one of the nicest venues I’ve ever been to. Well done. Come hang with us tonight at Ascend Amphitheater. pic.twitter.com/TDRMgcyjtl

Oct. 13, 12:36 p.m.: Let me see your grill
Dawson shows off his pearly whites in front of the Ascend Ampitheater in his soon-to-be hometown.

Apparently when Doug The Pug isn’t too busy recreating old Fall Out Boy videos, he hangs out with 50 percent of All Time Low (and is so not amused by the possibility of being licked).

Full Frontal Live at the @improvhouston — they’ve got the essentials.

Oct. 16, 1:17 p.m.: Welcome to Houston
For a band who love onstage dick joke banter, this was almost too perfect of a dressing room setup for their first live Full Frontal performance.

The first episode of Full Frontal Live is posted for everyone who wasn’t lucky enough to see Barakat, Gaskarth and Dawson drink mimosas and talk in-person at the Improv in Houston.

Country star (and former Hey Monday vocalist) Cassadee Pope posed with the band at a recent tour stop. She’s been dating our sweetheart Dawson for a few years, but it still feels like 2009 all over again.

At the lovely @tempeimprov for Full Frontal LIVE! What a nice venue, hope to see you all here soon. Starts at 1:00. pic.twitter.com/fTs4FA7sN4

It looks like downing mimosas before Full Frontal Live is going to become a trend on this tour.

Big thanks to @jasonfitzshow for having me on to talk Ravens this week! Great dude with a great podcast. https://t.co/1pEDxh4NaY

Congrats to the 5sos dudes! #SoundsGoodFeelsGood is here! Thanks for letting me be a part of it once again, lads! pic.twitter.com/XMb5c1ThE1

5 Seconds Of Summer’s second full-length, Sounds Good Feels Good, hit the physical and digital shelves, and Gaskarth was quick to support with a shameless plug of the track he co-wrote. Because that’s what Twitter is for, right?

Ran into some hookers! pic.twitter.com/SkpBqbWLVM

Oct. 23, 2:24 p.m.: ATL, 5SOS and a pop-punk photo-op
I’m assuming this is the equivalent of girls calling each other “bitch” and “slut” in that sarcastically endearing way.

Oct. 23, 11:18 p.m.: Michael Clifford jumps on stage in Los Angeles
The 5 Seconds Of Summer guitarist hit the stage with the guys at the Shrine Auditorium & Expo Hall for “Dear Maria, Count Me In.” Clifford joins the hallowed likes of Aaron Gillespie at Warped Tour 2009 and Set It Off’s Cody Carson when it comes to making a live cameo on the long-standing set closer.

Gaskarth joins Quinn and ONE OK ROCK’s Taka for a prime selfie shot with producer John Feldmann at the Los Angeles stop of the Back To The Future Hearts tour. Move over, Ellen. Your Oscar selfie has nothing on this.

Thanks to MTV and their Rocktober contest, now we know “Weightless” is the best rock anthem. The pop-punkers beat out former tourmates such as Pierce The Veil and Fall Out Boy for the fan-voted honor.

Met my #1 fan yesterday at our after show meet and greet!! 😀

I’m SO good at sleeping in.

Oct. 29, 11:46 a.m.: Gaskarth is SO good at sleeping in
In case you were wondering—because that’s obviously some need-to-know information.

Someone decorated our front lounge all spooky and I’m the happiest ������ pic.twitter.com/V3E5UYoa4E

.@joshuadun snapchats me while he’s pooping so I’m voting for him

Oct. 29, 5:26 p.m.: Barakat votes
twenty one pilots held their own hilarious version of a political debate, and Barakat put his two cents in because obviously the winner should be comfortable with Snapchatting his entire life story.

It’s Aloha Friday on tour today! Also yes I do realize nothing on my outfit has ANYTHING to do with Hawaii ����

A.k.a. “dress like a dad trying to be hip on a Hawaiian getaway” day.