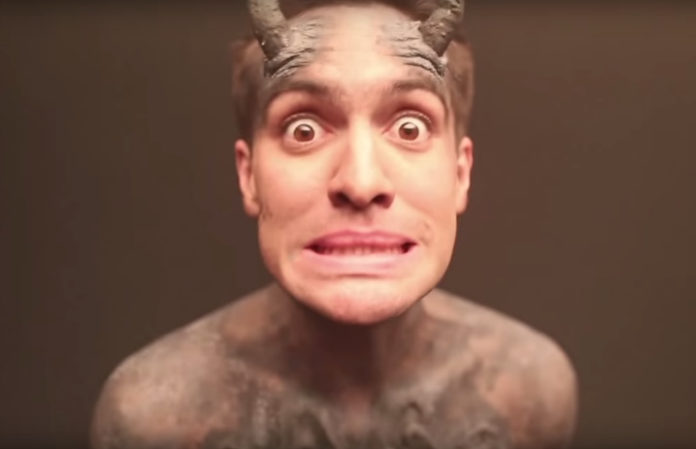 Panic! At The Disco just celebrated the 10-year anniversary of their debut A Fever You Can’t Sweat Out, and they’re still going strong. They treated fans to their first new material since 2013’s Too Weird To Live, Too Rare To Die! by releasing “Hallelujah” in April followed by two more tracks, “Death Of A Bachelor” and “Victorious” in September. Check out what the band had been up to in October below.

I think I blacked out… https://t.co/g5DgYUcOmD

I think most musicians would be thrilled to see an actor portray a more handsome version of themself one day.

Deep thoughts courtesy of Weekes after viewing the Frankie Valli and the Four Seasons biopic Jersey Boys, but we can’t say we don’t agree.

Face it, you were still doing this internally (or externally like a cool kid) three days after Panic! At The Disco dropped “Victorious.”

Thanks for creeping me the fuck out tonight. Also, thanks for the free drinks. @creeplosangeles pic.twitter.com/orgvtio33Y

Oct. 7, 4:37 a.m.: Urie goes through a haunted house with Anna Kendrick and friends.

I wonder if they did a “Cups” duet to keep calm.

Things that must go: “Man bag” I’m pretty sure that just calling it a ‘bag’ or even ‘purse’ won’t suddenly make you not a man anymore.

Same goes for “guy liner”. Just call it what it is: Pretty, pretty makeup.

Because at the end of the day, it’s just a bag and some eyeliner, right?

Oct. 9, 10:58 a.m.: Urie is the New Americana
Urie covered Halsey’s single in a Periscope stream, and anyone who wasn’t lucky enough to catch it live can bow down to the wonderful YouTuber who uploaded it.

Talent used to be the driving force behind success. Then you had to be talented & cute. Then just cute. Now you just need to be a meme.

Oct. 13, 10:00 p.m.: Weekes on the state of the entertainment industry
Alex From Target is totally talented. He bagged up those groceries without even flinching at the random customer snapping his picture—that takes true poise. Although, it could be argued that the true talent comes from those who have the knack of making stuff like that go viral in the first place…

Apparently there is a Cool Dudez Club, and apparently it consists of cool dudez like Weekes and twenty one pilots’ Josh Dun and Tyler Joseph.

This is awesome: http://t.co/D1RlfzS2Hz �� Thanks, Ohio University!

The frontman posted an Instagram clip of himself slow-motion running through a cloud of smoke and staring off into the distance before disappearing into the darkness. The only thing apparent was that something was coming Oct. 22.

Still staring off into the distance, Urie’s latest post clears things up a bit, stating that Oct. 22 is “the end of eras” with the news of a new album, song and video.

Oct. 20, 11:36 a.m.: Weekes gets obscure
Weekes launched a series of “TWOMINCVRS” where he’s reimagining lesser-known tracks as opposed to the popular ones we already know and love.

So close I can taste it… album announcement + new song + new video pic.twitter.com/rV4EezBiQ9

Oct. 21, 5:36 p.m.: Panic! taunts the internet
Little did we know, those cryptic tweets were the lyrics of the soon-to-be-released track.

It’s a beginning to a new era. And an homage to how it all began. New album ‘Death Of A Bachelor’ out January 15 – https://t.co/L5lXpqrumj

Oct. 21, 8:05 p.m.: Urie pays homage to his roots, announces new album
Death Of A Bachelor is a throwback to Urie’s way of approaching music as a kid, and we cannot wait to stick it on repeat. Is it Jan. 15 yet?

Oct. 21, 8:06 p.m.: Urie channels the devil in a new video
As if a new album announcement wasn’t enough, the new track “Emperor’s New Clothes” and its accompanying video immediately followed as promised. Falling through the ground to some hell-like underground has never looked so cool. (Seriously, have you seen that intense makeup and insane editing?)

Oct. 21, 9:58 p.m.: Death Of A Bachelor hits No. 1 on Apple Music
In a little under two hours since the announcement, Panic!’s next album slid by One Direction, Pentatonix and Justin Bieber to snag the highest spot on the Top Albums chart. We can only imagine Bieber is thinking “What Do You Mean?”

Same as it ever was.

Oct 22, 11:53 a.m.: Weekes gets trippy
Apparently he took a page out of Urie’s book and went with a cryptic Instagram clip, because why not?

If you’ve ever wanted to see Panic!’s frontman dance in full demon makeup (courtesy of the “Emperor’s New Clothes” video) to “Turn Down For What?,” then look no further…

Must be a Fuck Yeah Friday! Just hit a million views on the “Emperor’s New Clothes” video. Celebrate by watching it: https://t.co/mqDC9aldRk

Oct. 23, 12:59 p.m.: “Emperor’s New Clothes” hits one million views
Either one million people checked out the new video, or I’m not the only one who had it on repeat …

Oct. 24, 10:44 a.m.: Weekes sets the record straight
With Urie’s blog referring to Death Of A Bachelor as “this album is me,” and divulging he was playing everything himself just as he did as a child, many fans wondered if Weekes was even still in the band. Thanks to social media being a main line to our favorite artists, we now know that answer.

Damn, the “Emperor’s New Clothes” video was so much fun to film. Get a glimpse of the behind-the-scenes action here.Photo by Zack Hall

Photographer Zack Hall gave us all a glimpse at what went into the “Emperor’s New Clothes” video from the many demonic facial expressions Urie struck to how many layers of makeup it took in that four-hour sitting.

Vine idea: Stub toe on something. Edit in gun shot noise/currently popular song. Fall in slow motion. Caption: “Stubbing your toe be like”

Clearly this has never been done before.

Oct. 27, 9:37 a.m.: “Victorious” is used in the WWE 2K16 trailer
It really does match up perfectly to the guy getting bashed in the head with the championship belt…

I am best known for my

Oct. 28, 12:43 p.m.: Devil Urie makes the perfect Halloween costume
You know, if you’re trying to scare all the neighbors’ kids.

@tylerrjoseph @joshuadun The winner also gets to be my favorite.

Oct. 29, 4:21 p.m.: Weekes ups the stakes for twenty one pilots’ debate
Obviously that would be the best part about winning.

Thinking about going as “Brenda” for Halloween this year. Yeah? pic.twitter.com/WK3Nq15Ydi

Oct. 30, 10:34 a.m.: Urie shows off his alter ego-inspired costume…
…awkward peace sign selfie and all.
Oct. 30, 11:01 a.m.: Panic! posts a behind-the-scenes video from the set of “Emperor’s New Clothes”
Get ready for the horn pun and Urie’s inability to enunciate with pointy demon teeth…

I’ve never been offended when people turn my religion into a Halloween costume. Its so easy. Im just disappointed when they get it wrong.

I suppose I should be upset at the cultural appropriation aspect of it. I just get more upset when they get the name tag wrong.

Let’s just all agree to not appropriate other cultures for the sake of a Halloween costume from now on. Everyone wins.

Also before anyone turns this into something it isn’t. Dressing up as a Mormon missionary for Halloween is (cont) https://t.co/zTpRFo4JVP

Nah, this didn’t happen last night. @SethMacFarlane Thanks for the photo! pic.twitter.com/Xpey8e6d3c