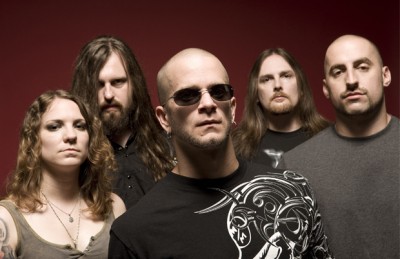 There can’t be many people unaware of the catastrophic earthquake and the resulting tsunami that struck Japan’s northeast coast last Friday, March 11. The largest quake to hit the country since records began, it left hundreds dead, thousands missing and even more without homes, as well as causing potentially disastrous damage to two nuclear power plants, prompting the Japanese Prime Minister to describe the situation as “the most severe crisis” the nation has faced since World War II.

Having played there twice before and in the midst of their first headlining tour of the country, Massachusetts metalcore crew ALL THAT REMAINS arrived in Tokyo barely two hours before the earthquake struck, thankfully a couple hundred miles south of the worst hit areas. Vocalist PHIL LABONTE shared his experience with us.

Where exactly were you when the earthquake hit?
PHIL LABONTE: It was the middle of the afternoon, and we were at the venue we were playing that night. The guys were soundchecking, and I was in back with our tour manager, and when it started to shake a little bit the first thing I thought was, “Is this a quake?” and then slowly things started to really rock, the lighting fixtures were shaking and you really had no doubt in your mind as to what was happening.

What did you do?
They took us out of the building. We were up on the fourth floor and as we were shuffling down the stairs past a couple of booksellers, books had fallen off the shelves and some things were getting knocked over. But it was a 5.5 quake where we were, nothing like as big as the one in the north, so things weren’t falling down or anything. When we got outside, there was a significant aftershock and you could see the tops of skyscrapers shaking, and seeing that, it got a little nerve-wracking.

What was going through your head to begin with?
My first reaction was, “Wow, this is cool!” because being from New England, I’d never really been in an earthquake before. Plus you hear about earthquakes in Japan and how they’re always prepared, and to be honest with you, Japan’s really got their shit together with pretty much everything. But when you get outside and see the look of concern on the locals’ faces, you start thinking, “Wow, maybe it was a bigger deal than I thought.” Then you see the news and an hour later a tsunami comes and destroys Sendai, there’s all these people missing, and then there’s all this stuff developing with these nuclear reactors that have been damaged by it, and you grasp that this is a massive, massive deal.

Could you get through to people back home to let them know you were okay in the aftermath?
Not over the phone or by text message, but the internet worked fine the entire time, and right away I was on my Facebook page and my Twitter feed posting “Holy shit, earthquake!” and that was how I connected with people. You have to be really thankful for that technology at times like that.

You still played your show that night—how was it?
It was good. They figured it would be a sellout before the earthquake hit, but after it did the trains were down and there were maybe 200 to 250 people there, which was still really cool considering the biggest earthquake ever had just happened. Japanese fans are always extremely appreciative of you going to play there in the first place, but then throw in that the quake hit and we still played the show, they were really, really appreciative. To be honest, they were going a little more crazy than I expected—Japanese fans have a reputation for being kinda reserved compared to people in the States, but they really went for it and it was a great show for all of us.

Did you manage to get your flight home okay?
Yeah, we were lucky. They canceled all the flights the day after the quake, but we were booked to fly the day after that, so we were okay. There were a lot of people running around trying to get flights out, and the lines were long but it really was very quick and very orderly. To be honest, it was very Japanese—very much how you expect the Japanese to run stuff, which was good to see.

To donate $10 to the ongoing relief efforts in Japan, text REDCROSS to 90999.