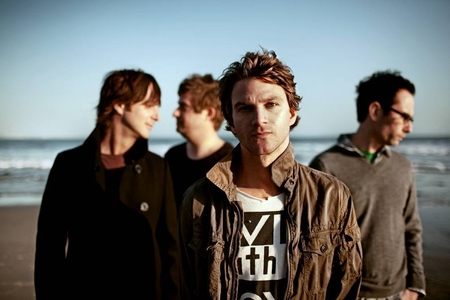 Following the promotional cycle for their 2005 album Parade Of Hearts, AMERICAN HI-FI seemed to disappear. The Boston-based rockers behind the 2001 radio staple “Flavor Of The Weak” decided to take a break from their relentless schedule and dive a bit more into their personal lives. They packed their bags, headed to the West Coast and eventually found work elsewhere in the industry (with an unlikely collaborator in Miley Cyrus) all without ever making any formal announcement about the fate of Hi-Fi. Now, with a new full-length, Fight The Frequency, ready to drop June 22 through their own label, Hi-Fi Killers/The Ascot Club (through Megafice/RED/Sony), frontman STACY JONES gives his first interview in nearly half a decade about the band that put him on the map.

American Hi-Fi – A Taste For Crime by altpress

We’re talking today because you and a few cohorts have an announcement to make, correct?
Exactly! [Laughs.] I don’t know if we can quite qualify it as a return, but weâ€™re putting out a new American Hi-Fi record [Fight The Frequency] on June 22.

What caused the gap in activity for the band since Hearts On Parade?
That would be Miley Cyrus. Starting in 2006, I began working with her as musical director and drummer. You see, when Hannah Montana began, she sang to tracks, but then I was lucky enough to put a band together for her. I met her manager while producing Open Air Stereo [known from MTVâ€™s Laguna Beach]. The band were doing a TRL performance–which was a big deal–and they wanted me to come along and make sure it all went well. I went down to Laguna and ended up playing guitar and doing backing vocals to add to the overall sound. When we got to MTV Studios though, I didn’t want to be onstage because I felt it would look odd. However, they informed me that due to the small studio size, the only place to hide me off-camera was in a janitor’s closet. So I played rhythm guitar and sang in the closet next to a bucket, which apparently impressed [Cyrusâ€™] manager because he called me and filled me in about how they needed a band for this new Disney star. I had no idea who Miley was, but I agreed to meet her and we hit it off immediately. She’s wise beyond her years and instantly started busting my balls about things, so I was in. [Laughs]. The rest is basically history. I played drums and since I got to pick [Cyrusâ€™] band, I brought in Jamie Arentzen [guitar] from American Hi-Fi along with other friends, and we’ve been her band since day one. In fact, on the last tour, our bass player broke his wrist and Drew Parsons [from AHF] sat in for six weeks. We basically had the whole group on the road with her, and it was great. I adore her, and itâ€™s honestly a lot of fun. Being a musical director is a pretty good position for me, but when it started, I didn’t even know what I was doing. Now I realize that itâ€™s basically producing a live performance, and I love that. Anything she does that people see in person involving her music equals my responsibility.

How will Cyrus affect the return of American Hi-Fi?
This is actually a great time for us because sheâ€™s filming a lot in 2010, and therefore we’ll have the opportunity to do more with Hi-Fi.

Where are you with the new AHF album?
The album is done. We finally finished it. [Laughs.] Itâ€™s funny– I’ve tried to put a bullet in AHF a few times, but its become the band that won’t die, and I actually love that. [Performing with] Hi-Fi is something I like to do, and after a few years of not playing, itâ€™s really nice to come back to it. We have the original guys [Jones, Arentzen, bassist Drew Parsons and drummer Brian Nolan], and it feels like it did when we released [2001â€™s American Hi-Fi]. When that happened, we had other bands and just did Hi-Fi in our free time. Thatâ€™s kind of how this album developed as well. Also, we’re doing this record without a real label behind us, just like the first record.

What made you go the DIY route with this release?
It’s so nice to be able to own your material. Given our experience, we simply know more now than we used to. We have a vision for our music and how itâ€™s promoted, so we wanted a say in how money is spent for marketing and those facets. We talked to a lot of labels and this deal with RED feels more like a partnership than anything else. So we’re pretty excited about that and the fact that we now are able to contribute to what happens with our material. We’re an equal voice in everything and put our own money down. It’s very exciting. Five years ago, you couldn’t do it all on your own too well, but now it’s different.

Can we expect more artists on your label or will it exist solely for AHF?
Right now, its just Hi-Fi, but the dream is to have other acts. I’ve done a lot of work with developing acts in the past few years like the Cab, but at one point, I’d lose control. I’ve seen it time and time again: Eventually these bands call and tell me how they got screwed later down the line. So I’m pretty excited about this opportunity as it could be a route to keep everything in-house. That’s all down the line, though. Right now, it’s all about Hi-Fi and what we can pull off.

Your website says a new album is due out in 2009 on another label. Are the tracks on the new album from those sessions?
Same tracks, different label. We were going to do a deal with this other label, but decided not to because we wanted to focus more on the album. We thought it was done, but I just felt something was missing. So we took more time, and I’m glad we did. Our site is a bit archaic at this point. [Laughs.] It’s hard to finish an album when you and your bandmates are spread all over the world most the time.

Where does the new material find you collectively as a band and individually as a person?
I think we’ve circled back to the first record in terms of sonics and style. We’ve moved back to big, riff-driven guitar parts with melodies on top and a slightly harder edge. I think it comes from the freedom we’ve had with this release and how we were in a similar position when that record came out. I wrote songs I loved without outside opinions–like the first record–and showed them to the guys who loved it. No more, “You should do this” or “This is a good move” from some outside source. I’m not saying we did anything we didn’t like because labels told us too, but I honestly hate two songs from [2005â€™s] Hearts On Parade, but we did listen to labelsâ€™ opinions because we were young and the results may have changed a bit. You’re bound to have bad songs, though. You have to fuck up in order to grow.

You relocated to Los Angeles from your hometown of Boston. Do you think the West Coast lifestyle has influenced you?
It definitely has. I find myself writing a lot differently when I’m in L.A. I live in the Hills and have this great canyon view with 72-degree weather. Itâ€™s weird, but it does change your outlook. In Boston, I lived downtown and it was often dreary. Everything seemed different. Also, I noticed on this record that I used the term “sun” a lot. [Laughs.] How could you not when living in California?

Many music fans cry sellout when bands relocate. Do you try and “keep true to your roots?”
We do what we do. I’ve honestly never thought about us and selling out. When you’re in a band, you do things that feel right at the time based on instinct. Moving to L.A. did great things for my career and personal life. We’re not a punk band like Fugazi or anything, we’re a rock band and just do what we do. That said, Boston holds a special place in my heart, and itâ€™s where I got my start. I’m still close and connected with the Boston music scene, but a lot of my friends from there now live out here. There’s a great East Coast-based community and the experience has been great.

Youâ€™ve also built a name for yourself in the world of production. How did you get started working behind the boards?
Hearts On Parade was completed at my studio here in L.A. Jamie [Arentzen] and I went in and goofed around, and what started as demos grew into a record. Then we brought Butch [Walker] in and expanded on it all. Around that time, we bought the studio, which used to be used by Hole, [and made it] Hi-Fi base camp. People found out about it and would start asking to come over and work with me. At the time though, I was always on the road with Hi-Fi. So after we got off the road, the first band I had in my studio were Meg & Dia. We did [2006â€™s Something Real and I loved working on it. So I called my manager and said, “Get me more. I love this.”

Do you have any projects on the docket?
I’m doing the new Downtown Fiction record in April, and we just finished [recording] with the Cab. It’s funny. I was reading [AP 261 featuring the bands of the AP Tour], and I had worked with four of the bands I saw [on the cover]. Outside of those two, I played drums for Hey Monday and Every Avenue on their records. Actually, now that I think about it, I also did the new [self-titled] Downtown Fiction EP, which is in stores this week, so people should probably pick that up. [Laughs.]

You’ve managed to keep working at a time when the music industry seems uncertain. What advice do you have for those hoping to leave their own footprint in this industry?
You’ve gotta have a lot of irons in the fire. I’m a drummer for hire, a producer, a studio owner, a musical director, a songwriter and I have American Hi-Fi. You need to be a multi-tasker unless you’re in a giant band like the Fray or something. If you’re in a little band like ours, you gotta hustle. Thankfully though, it’s an enjoyable hustle.

What other plans do you have confirmed for the rest of the year?
We’re literally just getting the old American Hi-Fi engine going. Right now, we’re getting the oil changed, buying new tires and checking the fluids, but it’ll be leaving the garage soon. We shot a video, did a photo shoot and soon we’ll be working on some tour dates. The beauty of Hi-Fi is that we do what we love and whatâ€™s fun. It’s on our terms now, and we’re going to do what we want when we want, and I’m so thankful to be in a position where I can do that. These are my best friends, and we play our favorite songs. We’re going to give it another run, and we don’t know what’s going to happen, but we made an album we’re proud of so we’re sure it’ll be fun. alt