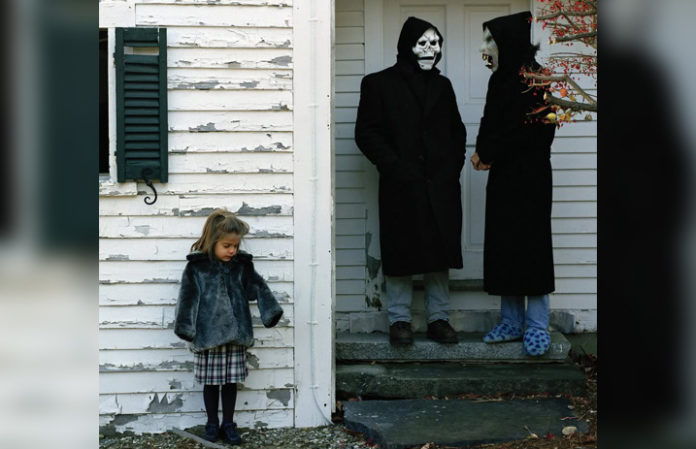 There he was, a despondent young man sitting in a crowded bar in lower Manhattan. It was 2004 and the music scene around him was exploding and his band, fresh off of signing with Interscope Records, were heading toward the height of their popularity. But that night Brand New frontman Jesse Lacey was still wrestling with his band’s then-incubating major-label debut. “We’re trying to make sure these are absolutely the best songs we can write,” he said, looking at his bandmates. “I think we said that four million times today,” he added with a laugh. “I don’t know if we have anything else to say.”

Over the next 10 years, he proved it. Though he spoke with AP again just two days later (a never-before-seen excerpt from that late 2004 conversation follows), during the next decade, Lacey essentially swore off in-depth interviews and all but went silent as he began writing and then rewriting Brand New’s third album and eventual masterpiece, 2006’s The Devil And God Are Raging Inside Me. Which, when you think about it, is just as big a part of this record’s legacy as anything.
After all, that resounding silence (both before and after Devil And God’s release) attracted a cult-like following that often pored over the album’s every detail. Were the lyrics to “Limousine” really about a drunk driver who killed a 7-year-old girl not far from Lacey’s childhood home? (The answer, sadly, is yes. The victim’s family later appeared on Oprah.) Did the band really scrap an entirely different album with Modest Mouse producer Dennis Herring? (That answer is… well, more complicated.) But in the end, the fewer answers these questions had, the more fans obsessed.
Even now, what can you actually say about The Devil And God that will even do it justice? When it was released, there hadn’t been an album this good at heady bombast since Radiohead’s OK Computer and, frankly, there hasn’t been one as good since. It’s arguably the best guitar rock album of the past 15 years and, sure, all of this is what you would expect to read in a “best of” blurb like this. But to this day, nothing beats simply putting on The Devil And God, turning it up full blast and hearing that same despondent young man fighting for his place in the world.

When we spoke the other night, we talked about the pressure that has come with recording this new record on a major label. But we’ve spent most of tonight just talking about music. I get the sense that you really love having conversations about music.
Oh yeah, definitely. [Smiles widely.]
But the conversation we had the other night—that had to feel like the antithesis of why you got into music in the first place.
There are certain things that you have to take into account when you’re doing this. Just thinking about, “Okay, this label invested in us and they want to do something with the music we give them.” What we give them they are going to have to market or get played on the radio. [But right now] a band like Modest Mouse has just gone platinum. That’s amazing. That’s a band I’ve been listening to forever. The first EP they put out, my friend played for me [in high school]. I never, ever thought I would hear them on the radio.

“Maybe, just maybe, we can do whatever we want and not fail.”

But that’s what’s interesting about the place you are in. Recording for a major label right now doesn’t have to be terrifying. It can be the complete opposite.
Absolutely. I think there are other times where it wouldn’t have been like that. If we would have come out six years ago, we probably wouldn’t have signed to a major label. This kind of music, it wasn’t what people were looking for. But now labels are paying a lot more attention. It’s totally exciting. Maybe, just maybe, we can do whatever we want and not fail. There are so many things that have worked for us recently that we had no idea would have worked, so let’s just go. Let’s gamble and see.

Read more: Here’s what the little girl from Brand New’s iconic ‘The Devil And God’ album artwork looks like now

The path that this record seems to be taking right now is both very experimental and then, I hate to say it, but also very accessible.
That’s fair. [As we’ve been writing this album] some days we’ll find ourselves totally deviating from what we were doing the previous day, but instead of pulling ourselves back, we kind of run that course and see where that goes. A lot of times that takes us to this place that is so far away from what we expected. But it has been very beneficial for us to take that journey. We never had that opportunity before. That’s hands-down the best thing about what’s going on right now.

“There is way more responsibility that comes with being respected than being famous.”

With the last record [2003’s Deja Entendu], you didn’t necessarily become famous but you did become a lot more respected. What difference does that make for you?
I think I would have been much more insecure with fame—but that really didn’t happen to us. As much as it might have seemed like Deja propelled us, it propelled us in a very gradual sense. I’m obviously much happier with it happening that way. We are very conscious with the way that it could have gone. If that record had sold a million copies and at every show most of the crowd was waiting for us to play [our hit single], I would probably hate it more than anything. But that drives us in a certain way. We are honestly not thinking about this record in terms of writing singles. We’re still talking about these songs in terms of an album. I feel like that is very important to us. There is way more responsibility that comes with being respected than being famous.
Do you understand why that is?
Having an image and being recognizable—that is a very large part of fame and that is something that we try to avoid. We’re not all over MTV; we’re not all over magazines. That has allowed us to stand on just the music. I really hope that we remain respected. There definitely are bands that do jump out fast. Everyone thought Radiohead was a one-hit wonder but then, my God, look at what they accomplished. ALT

To find this and other interviews about classic albums from 2006, pick up a copy of AP 338.