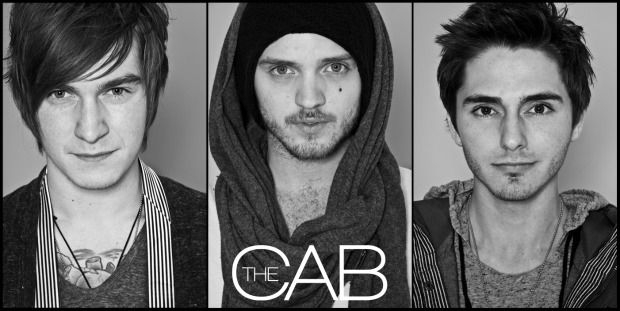 It’s been more than three years since Las Vegas rockers THE CAB released their debut full-length, Whisper War. Plagued by lineup changes in the past and delays with their label, Fueled By Ramen, the band recently announced they severed ties with FBR and also let go long-time drummer, Alex Johnson. Now, frontman ALEX DELEON speaks out on what happened, where they’re headed and how excited he is for the world to hear Symphony Soldier, the Cab’s long-awaited sophomore album dropping Aug. 23. (You can pre-order the album now at the Cab's official website.)

This album has been a long time in the making, to say the least. What are you most proud of?
Bands break up all the time because of the stuff we were going through, and [I’m proud of] the fact that we could put all that aside and become stronger. Not to sound cliché, but [we were able to] grow from it. Separation from the label definitely gave us a bigger sense of self-worth. We could do what we wanted; we could trust our instincts instead of always having to talk to a higher-up, and have someone telling us what they wanted from us and having all these demands and pressures. When all of that went away, it was super-easy to make an album that we were proud of, whereas before there were guidelines you have to follow being on a record label.

When you announced you were leaving Fueled By Ramen, you said the label didn’t see eye to eye on where the Cab should go. Where do you think the Cab should be going?
The thing is, Fueled By Ramen is still one of the best labels around. They’ve taken Gym Class Heroes, a bunch of hip-hop dudes, and turned them into one of the biggest staples in that pop/R&B world. Or you look at Paramore, who’ve become one of the biggest bands in the world. FBR is an incredible label. I think the case with us… I don’t think they got us. I think they were excited about us, and then it got to a point where I just don’t think they were on the same page sound-wise or vision-wise. I think they were just kind of like, “Look, we don’t know what to do.”

Labels are in such a bad spot, because everyone is trying to do what’s popular right now. Like, “What’s on the radio right now? What’s Top 20 right now? Let’s try to do that.” And sometimes you don’t need to follow the trends. You need to start the trends. Sometimes people don’t realize that. Everyone at the label treated us great, but we knew exactly who we were as a band and we knew what we wanted. We’ve always wanted this R&B/edgy-rock thing. I don’t think they saw that.

But at the end of the day, I think both sides knew that it was like, “Okay, we’re not agreeing on anything, I think we’ll both be better off.” It was just confusing. I think that’s the best word. Everyone is confused. No one hated anyone. They didn’t hate the music; we didn’t hate them. We just weren’t agreeing. So that’s it. I mean, it wasn’t really dramatic or anything, and I’m sure we’ll remain close with a lot of the people down there, and a lot of the bands [on the label] are like our family.

Were disagreements with the label on the album’s direction the main reason it was delayed this long? You’ve been writing songs for more than a year, since before the 2010 AP Tour.
I would like to say that it wasn’t, but it definitely was. When you’re wrestling with labels for years on songs and [they say] “Keep writing, keep writing.” We were like, “We have the songs. These songs are amazing—kids are going to love these songs. We know our fans more than anybody. We know our band. This is going to work.” And they’re like, “Yeah, we like it, but keep writing, keep writing.” There’s only so much you can tell a band to keep writing before it’s like, “Listen, we love this, and that’s what’s important.” If a band or an artist doesn’t believe in their music, it’s just not going to be genuine. It’s not going to work.

The biggest artists out there are the people who live and breathe their songs, and we want to be one of those bands. We don’t want to be told what kind of songs to write or what to do. Not saying Fueled By Ramen did that, but we just never wanted to be in that position. We wanted to have control, and it got to a point where we’re like, “We’ll release this, we’re happy with it.” We have people who believe in us. We did songs with Bruno Mars and Maroon 5, and I met Justin Timberlake and he told me he loved our band and wanted to work with us, so it’s like all of these people were believing in us, yet the people around us weren’t. [Laughs.] You know, the people who were on our team weren’t.

Back in early 2010, you had worked with some big-time names such as Sam & Sluggo, Rob Knox and Claude Kelly. How many of those songs made it to the album?
I think maybe one or two of the demos that leaked online will be on the record, but most of them won’t. We wanted to do a record that sounded like us. We were putting together a record, and at one point, it was sounding like an American Idol record or something. A bunch of great songs, but too random and too forced, and we didn’t want that. It didn’t sound like us. The heart and soul was kind of disappearing. We were writing great songs, but politics have a lot to do with everything, obviously.

So now, we got to pick the songs that we worked hard on, and we always knew working with people like Maroon 5 was the lane we wanted to go down. Not the overly pop [sound]. The Cab’s never going to sound like Lady Gaga, no matter how much anyone wants us to. It’s just not. Not to say that Fueled By Ramen wanted that, because I’m pretty sure they didn’t, but it’s just never going to sound like that. Once we parted ways, we reached out and worked with Maroon 5 and this writer Sam [Farrar] who works closely with them. Also, [we worked with] Martin [Johnson] from Boys Like Girls—whom we’ve always been friends with—so it was a really seamless transition. And we actually wrote our single, the one that’s going to radio, with Martin. It’s called “Bad.” Radio’s already started playing it. There was no stress, no pressure, no one telling us what to do. It was like, “All right, let’s pick up a guitar, hang out with our friends, and write a song.” Let’s not worry about radio, and if it’s a good enough song, all of that will come. And it did. And that’s how music should be. It shouldn’t be forced or planned. It should just be very natural and organic.

You definitely worked with some big names, and John Feldmann produced Symphony Soldier. Is there anything to the rumors you’re signing with a major label?
Right now, the music industry is in such a bad place. Labels are becoming both more and less relevant at the same time, as weird as that [sounds]. People need them more than ever, but at the same time, people are having massive success without the labels. All the crazy deals—like the 360 deals and all of that—we’re just going to do it on our own. We have a fanbase, so we’re going to put the record out on our own. We’re going to radio on our own, we have a radio team put together, and then we’ll see what happens from there…

We’ve definitely been in talks with a lot of people. It’s kind of like when you’re in a relationship and you get out of it, you don’t want to just jump the gun and rebound, you know? [Laughs.] You kind of want to hang for a little bit, do your own thing and kind of realize what you want. And then if someone wants to support you and be your biggest fan and help you out, awesome. If we do sign with a label again, we just want to make sure they’re on the same page and they’re on our team, because that’s definitely the most important [thing] when it comes to artists’ and labels’ relationships.