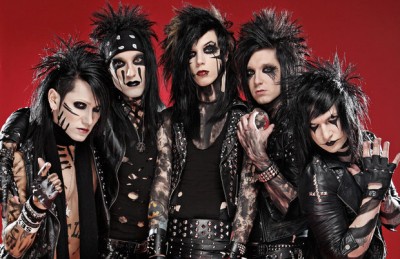 Sometimes, things don’t work out the way you planned. Just ask Black Veil Brides vocalist Andy Biersack, who shattered three ribs while attempting to jump from one pillar to another during the band’s album release show on Saturday, June 18, at the Hollywood & Highland Center Hot Topic in Los Angeles. Even though Biersack’s injury occurred only three songs into their set, he managed to play the remainder of the show before he was rushed off to hospital, where he learned the extent of the damage. The incident itself was inevitably witnessed—in all its graceless, bone-crunching detail—all around the world via YouTube.

Biersack is now recuperating in a rented West Hollywood apartment with his mother and friends for company. Although heavily medicated, he is upbeat and philosophical about the incident, and he is typically determined to go on with the show as soon as humanly possible.
Interview: Dan Slessor

What were you actually trying to do?
Really, I was trying to fly—and I’ve clearly not perfected that yet. No, I wish I had some great story for why I was doing what I was, but I was doing my usual thing where I climb up and then jump back onstage, which usually ends badly—though not this badly. The thing was, I was wearing cowboy boots on a slick, hard, marble surface, which I’d never jumped from before. I started to slip a bit while I was up there, and I sort of sat down thinking that I could push with my arms, and land on the adjacent pillar—and everything sort of worked according to plan, except for the fact my legs fell immediately and just slammed my ribs into the pillar.

What was going through your head at that moment?
The only thing I had in mind was, “Ah, shit,” because I knew once I pushed, it clearly was not enough velocity, and I was headed for the ground. More than anything, once I was able to regain a bit of consciousness, I just felt so stupid, because I knew we were only three songs into the set. If I dared to end the show there that would just be the biggest slap in the face to the fans who showed up and wanted to hear some new songs, and I didn’t want to make them miss out basically because of me making a stupid decision, so I just got on and finished up the set.

What is the diagnosis?
I’ve currently got three shattered ribs, most of which are sort of like bone shrapnel in my back area. I’m pretty heavily medicated right now, and I can’t really feel my extremities, because if I move too often I run the risk of those pieces of bone shifting and stabbing me, and sort of causing internal bleeding—and there’s also one very near my lung, that could potentially collapse it. I have to wait for these bones to fuse before I can really move too often. But this is a double-edged sword, because if I don’t move often enough, the excess bone will kind of sit there and cause blood clots inside me, so I have to at least get up and try to walk several times a day.

Have you seen the YouTube videos of your plummet?
Oh yeah, my band and road crew left for Warped Tour yesterday; they’re going to hang out there, and hopefully I can join them soon. But they stopped by and were teasing me and showing them all to me. There’s one in particular I thought was interesting, which is the montage someone’s made using all the different camera angles. There’s like sad music over the top that kind of implies I died. The thing is, I know what I did was dumb, and now I have to pay the price—and unfortunately, that means missing the first week or so of Warped, which is not good. But I can either lay here in misery and kinda hate everything, or I can understand what my plight is, take my medication and do what I can to heal.

Since it’s going to take a while to fully heal, will the injury affect the way you perform?
Certainly. The doctors have all told me that basically it’ll take me the entire span of Warped Tour to heal, so if I go back and play on Warped, it’s going to be too soon. To me, it’s all about whether I feel physically up to it. I’m not going to go out and do it if I feel like I can’t move, because I don’t want to ruin my body permanently so I can never perform again. But if I feel like I can go onstage and competently play, then I’m going to do it. I know I’m not going to be able to perform to the best of my abilities, but I feel like the fans at least deserve to see the show in some capacity.

And next time, when you’re contemplating some great leap, will you take an extra moment or two to think about it first?
I don’t think so. I’d like to say that I would, but that wouldn’t really be me.