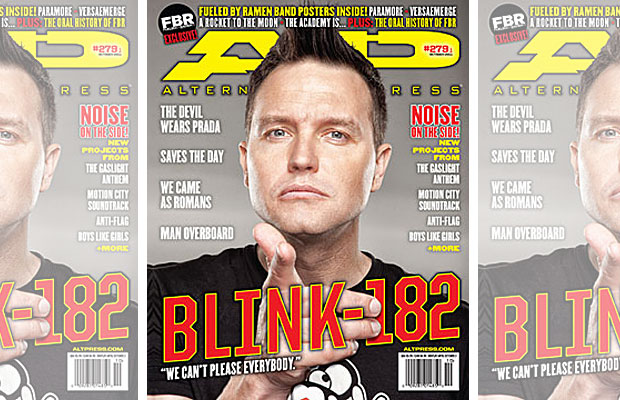 We had so much extra content that we couldn't squeeze into AP 279's BLINK-182 cover story that we thought we'd be remiss to not share some of it with you. Here, vocalist/bassist MARK HOPPUS talks with Scott Heisel about everything from his involvement in City (Comma) State to just how many Blink songs he's allowed to put on a playlist.

There are a number of projects that you began over the past couple years that didn’t really come to fruition, specifically City (Comma) State. That’s something that you were tied to really early on and is it odd for you to see it come to such of a unceremonious conclusion?
MARK HOPPUS: Well, here’s what happened with City (Comma) State. One of my friends, it was January of 2010—is that right, was it that long ago?  Must’ve been that long ago. January 2010. And we had some time off from Blink, and my friend said, “Hey, I’m recording this singer, do you want to come down and play bass on some of this stuff?” So I went down there and recorded bass and had a few ideas on stuff and was kind of producing it and helping them write it, and obviously, Blink is my No. 1 priority for everything, so I wasn’t able to invest a bunch of time in it. But I loved the songs that I wrote with them, and I figured they had great ideas, but it was really their band that I was just helping out with and it kind of fell apart.

Was it strange for you to know that those songs that you helped work with didn’t end up seeing the light of day?
It’s a little strange, but that happens from time to time. I wrote a song with All Time Low that I think is a great song that will never see the light of day.

Because those things are sitting in a vault somewhere, have you ever thought about going back to those and removing your ideas from them and bringing them back to Blink?
It’s possible. I think that there’s some really good ideas that I have out there but I also don’t want to feel like Blink is getting sloppy seconds. [Laughs.] I think that when I write with Blink, the ideas change so much and evolve in such a positive way because of Tom and Travis’ influence that any idea that I bring is going to be brought to a much better place anyway. I would rather start a new idea and bring it to Tom and Travis and start fresh.

Obviously, being in a band is just as much of a job as working at 7-Eleven, and there’s always going to be issues that arise while working on something at the time. Were you able to leave that stuff in the studio, or did that ever carry over to other facets of your life?
I never have any separation between the two. I don’t leave anything anywhere. I bring everything with me everywhere. When I’m home with my family, I’m in Blink-182, and when I’m onstage, I’m a family guy.

So when you’re interviewing Buckcherry on Hoppus On Music, is there something in your mind that’s saying, “Oh, I need to go change the second chorus of that third song because it’s not high enough.” Are there those moments that pop up?
Yes, always.

So how do you keep focused on what you’re doing without being scatterbrained?
I don’t know, because there is so much stuff that’s going on. I think the best way for me to do it is to segment things as much as possible so that when I’m at Fuse recording the TV show, I’m mostly focused on that. My mind still goes, like you said, “Oh my gosh, I need to finish that verse, I have an idea for a verse,” and I will, on a break—literally in between [takes], I’ll take out a piece of paper and write down an idea. It’s like when I’m at the studio, I’m answering emails and doing work for Fuse. But when I’m at the studio, I try to focus on what I’m doing at the studio and then when I’m at Fuse I try to focus on that. And I work really hard. I work really, really hard. I work until midnight and then I’m usually up at four or five in the morning and I’m working then as well.

I was going to ask you about that because when we spoke a couple years ago you mentioned that you were sleeping three hours a night. Obviously at some point there has to be some sort of give. Was there ever a point over the past couple of years that you were working on the record where you just couldn’t go that hard anymore where you decided to take a break and remove yourself for a couple days?
Luckily we’ve all been able to do that. For me, being involved in Blink-182 is my main priority. Obviously Fuse is a big priority, obviously my family is a huge, huge priority but kind of juggling and balancing those three things keeps it fresh for me all the time. When I’m in New York and I’m working on the TV show, it gives me a break from Blink even though I’m still working on Blink, and vice versa. So I’m not really so bogged down in any one thing for so long that it starts to weigh on me.

What are you currently listening to right now? What’s currently on your playlist?
Right now, it’s still the Joy Formidable by far.

Is there anything else that you currently just can’t get off your stereo whether it’s old stuff or new stuff?
That’s the one thing that comes to mind. Uh, Crocodiles, I listen to them all the time. The Cults record I think is really cool. What else? I don’t know, I’m working on my Spotify playlist so I’m kind of going through everything that I’ve ever listened to right now and trying to create the ultimate playlist.

How many Blink songs are on that playlist?
There’s a strict rule on my playlist that every band only gets one song. alt