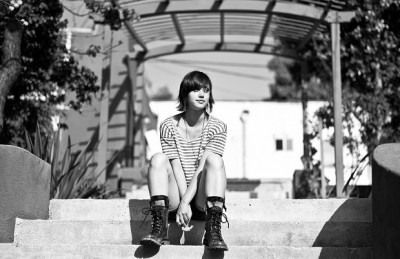 If you’re a Warped Tour regular, than you probably know DIA FRAMPTON better as the lead singer of sister-act indie-rockers Meg & Dia. However, if you were just introduced to her on the inaugural season of NBC’s The Voice, you know her as that chick who totally rocked the Kanye West cover en route to becoming the show’s runner-up. Either way, AP checked in with Frampton from Los Angeles—where she’s gearing up for a tour with other competition finalists later this summer—to find out how she picked her songs, what her second-place finish means for her band, and why she’d never do a show like The Voice again.
INTERVIEW: Rachel Lux

What made you decide to audition for The Voice?
There are a lot of different factors that went into that. The first reason was that Meg & Dia just finished doing an album called Cocoon [which was released this past March], and you probably haven’t heard of it, and that’s kind of the reason why I did this show. Meg & Dia were on Warner Bros./Sire for a while, and we got dropped about three years ago, so it’s just been a long, spiraling-downward time. We wanted to keep playing music, but we were booking-agent-less [and] label-less; we didn’t really know what to do next. But regardless, we were writing, and we really wanted to do this album, and we ended up recording it as low budget as possible straight out of our pockets with money we saved up from tours. We recorded most of it in my mom’s house—which she wasn’t very happy about. But we saved a lot of money, and we just hired a friend to engineer the record for really, really cheap. We put it up on iTunes and Bandcamp, and it’s still up there, and basically it was just kind of sitting there. It did what our record did when we did have a label [2009’s Here, Here And Here]. It came and went without anyone really noticing.

Our manager Mike [Kaminsky] actually called me about the show. He was really funny, because he said, “To be honest, I don’t think you’ll get that far, it’s one of those huge vocal competitions.” [Laughs.] And I was really hesitant. I think I sing okay, but I’m more of a singer/songwriter; I don’t belt out Celine Dion songs, and I don’t think I could do it very well if I tried. And that’s usually what I think of when I think about shows like this. So I was really hesitant, and I thought it sounded stupid and I didn’t even know what it is. I was like, “I am not doing American Idol, that’s weird.” And he’s just like, “It’s not American Idol; it’s The Voice. You should check it out.”

Everyone gets a free pass when it’s the first season of a new reality show, because no one knows what it will turn into. But that’s interesting looking back, you don’t think you’d do it again.
I definitely wouldn’t. It’s so scary and it’s so real. I mean, when I was literally auditioning in the little studio in Burbank, California, they didn’t know who any of the coaches were except Adam Levine, and I was like, “Okay, whatever.” There were thousands of people who tried out, and when it was just 80 of us in the hotel, and they were still looking up our criminal records and stuff, Mike e-mailed me and was like, “Look who they picked for the second coach!” And I was like, “Christina Aguilera? Are you serious? [Laughs.] That’s when I got really, really nervous and freaked out. Then they got Cee-Lo [Green] and then they got Blake [Shelton], and I was just thinking, “Wow, this is going to be a lot bigger than it looked on the [original version] Voice Of Holland.” I mean, Holland is a small, small place. They made the show so much bigger.

So, I started to get really, really freaked out, and honestly, when I was in the hotel and they were still doing casting for the show, I was like, “I cannot do this. I cannot do this.” I went and talked to somebody, and they were like, “Yeah, you can leave, but you’re going to have to reimburse us for the flight out here, and for the hotel room”—which was, like, over $200 a night—and I was like, “Oh, never mind.” [Laughs.]

What did Meg and the rest of the band say when you decided to try out?
They were really, really, really hesitant about it. Mostly because we had a really small tour lined up. It was just a headliner going down to South By [Southwest]. We love playing there, and we hadn’t played there in years, and it was like, “We don’t want to give up South By…” So [our management] was just like, “Just hope she gets past the blind judging and maybe get on a couple episodes. People will Google her name, and people will see her band, and you’ll have Cocoon all over the website, and that will bring a few more thousand people to check out the album. This is a really backward way of promoting Cocoon.” And they were like, “Well….” They were just really hesitant, but said, “Okay, cool.” And as the show went on, they watched the blind auditions on TV, and the band didn’t know what it was, either. I think they thought it was a lot smaller than I even thought it was. So when they saw it, they were just like, “What the heck is going on?”

As it kept going and progressing and progressing, it just kind of completely changed because now people know me more as Dia Frampton instead of Meg & Dia. [The band and I] have been talking a lot, and as far as the band goes, we just want to keep it as much the same as we can. We’re still going to play Meg & Dia, and I love it. And that’s always dear to me, and I still want to promote Cocoon as much as we can, because it’s very special. That was our first independent record we’ve done. But right now, we’re just kind of rolling with the punches and seeing how it goes and seeing what’s next, and trying to stay together. We’re still going to hopefully do tours as Meg & Dia, and if we do a tour as Dia Frampton, they’re still going to be my back-up band. [Laughs.] So we’re just going to see how it goes.

On American Idol, even if they don’t win, most of the finalists still end up getting offered record deals, so if that opportunity presents itself, would you embark on a solo career or hold out for a full-band opportunity?
It hasn’t been offered to me yet, but if it is offered to me, I think I would record a solo album and just kind of go with it. Because right now, I did put in a lot of time and it did turn out to be kind of a Dia Frampton thing. That was not the original plan at all. When I was a little kid, I really wanted to sing and I really wanted to travel the world and write songs and be able to make a career out of it and support myself financially with it, and just be a musician. And I always thought that I’d do that with Meg & Dia. But I still want to get my dream, but I think that things never work out the way you see them on paper. There are always twists and turns, and you can still end up getting what you really dream about and what you really want, but it’s never the same, and you can’t be so stubborn to get it perfect.

And that’s just kind of how I feel right now. This isn’t how I saw things at all. [Laughs.] But I think it’s kind of stupid on my part to just let it die down. I don’t know what could happen right now, but I’m trying to stick with the momentum. The band members all see this as a good opportunity. Even if my solo project does better than Meg & Dia, that’s still a way for people to look me up and see, “Oh, she’s in this band with her sister, let’s check out their albums.” Or also, it’s a way that if we go on tour, they might make more money—at least enough money to move out of their parents’ houses, and that’s what’s most important to us right now.

[For more of AP's interview with Dia Frampton, head to page two!]