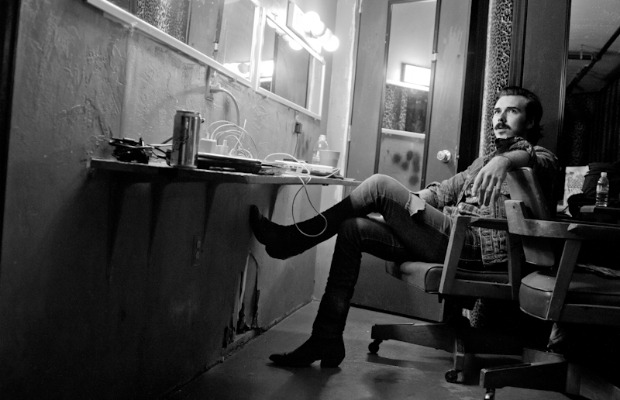 After self-releasing his album, Charlie, this summer, Austin Gibbs spent his summer on the road with the Maine and Augustana. Not one to be off the road for long, Gibbs will be joining Lydia for half of their fall tour. AP recently caught up with Gibbs to find out how he’s prepping for his new tour dates and what he’s planning for the future. If you haven’t heard Charlie yet, now’s your chance: Through Monday, October 10, stream the album and snag a free download of it exclusively right here on Altpress.com.

You had an opportunity earlier this year to tour with the Maine and Augustana. How do you feel about the bands—and how do you feel about Augustana calling it quits?
It was an amazing time! I went on tour with the Maine two summers ago and that was one of the greatest summers of my life. It’s going to be hard to top. I heard that Augustana is going to stop making music. They are such a great band; I don’t think any of them are going to stay out of music for too long, you know? They are too good at what they do to call it quits.

What can fans expect from the fall tour with Lydia? Any surprises?
It’s going to be a lot of fun; I’m really excited about it. We’re just going to be having some fun. There is no new music. The past couple of months, I’ve just been sitting around and re-arranging the songs a little bit, like coming at them through a different door. I’m just trying to figure out how I can spice them up a little or die them down. They are going to be the same songs, but maybe a little different.

You self-released Charlie at the beginning of summer. What are the challenges of releasing an album yourself, especially in 2011?
People always seem surprised when you put an album out yourself. It was actually pretty stress-free. We had a meeting with my manager Tim [Kirch], and I was talking to him saying I wanted to do another EP. He said, “Why don’t you just do an album? You have two EPs. I think it’s time you just put out an album.” Kind of on a whim, we were just like, “Let’s do it!” We started writing, had 15 songs [and] went to El Paso and recorded them [at Sonic Ranch]. They all just came to life [there], then we released them while we were out on tour. Being the first album, it was a new experience, but at the same time, it was a lot of fun. I was so happy that I finally did it. When I first started writing music, I wondered, “Will I do a full-length, and how far will this go?” To finally release that first one, it was really, really exciting. It was a great time.

Can you talk a little bit about your musical influences?
I listen to a lot of Wilco. I love ’70s music—I love Bread, I love songwriters like Carole King. I [also] love Ben Kweller. I don’t know if you want to call it “easy rock”? [There’s] something about those bands that I love. I’ve got my weird stuff, too. Recently I’ve been listening to a lot of ’80s music. At first, I wanted the album to sound really ’80s—like drums-wise, have them sound [like those] really paper-y, trash drums and then have a lot of chorus drive pedals on the guitars—but it evolved into what it is. [Bruce] Springsteen is probably my number one [influence]. The Boss can do no wrong. That’s my main man.

What about Tom Petty? Are you a fan?
The thing is, everyone rags on me because I haven’t dove into Tom Petty. I’ve listened to the greatest hits and everyone in the van’s favorite Tom Petty songs, but I don’t have any on my iPod, and I don’t own any of his albums. [While I was on tour with the Maine and Augustana] Dan [Layus, singer for Augustana] thought we should all do a song together. Augustana is a big fan of Tom Petty, and so are the Maine. They said they wanted to do the song “Walls.” I listened to it, and I fell in love with it. I was like, “Why am I not listening to Tom Petty? This shit’s great.” I still have not listened to Tom Petty like I should. That song was a lot of fun, though.

Have you written any music over the summer? Any plans for recording coming up?
I’ve messed around. Me and my guitar player, Trey [Nickelsen], we’ve been messing around with some stuff. What’s kind of on my mind lately is when we come home in December [I’d like to record] some of these songs live [and release] an EP with five or six of these songs live, with the different versions that we do. That’s one of my plans right now. [I’m] definitely writing some new music, though. Next year is going to be a good one. alt