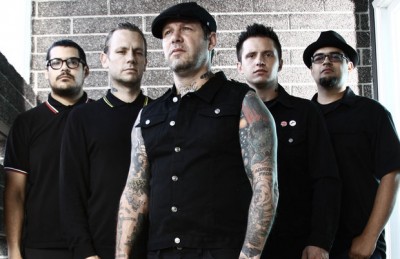 Earlier this year, AP talked to Roger Miret to talk about the new Roger Miret And The Disasters album, Gotta Get Up Now. The conversation also covered his history before and after he became a hardcore legend as the singer of Agnostic Front—from being raised by Cuban immigrant parents in infamously seedy 1970s New York City to growing up a little too tough for his own good, which led to the felony conviction that derailed his punk band in the 1980s. Now that Agnostic Front’s new, rock-solid throwback of hardcore album, My Life My Way, is in stores—and the band have announced an extensive fall tour—AP decided it was a good time to revisit the interview parts that dealt with his life at its most hardcore. Be sure to also check out Roger Miret And The Disasters’ new video, “JR.”


I was still a kid when Agnostic Front’s first Live At CBGB album came out, and when you dedicated “With Time (For Amy)” to your daughter, I thought, “Can a guy in a hardcore band have a daughter?”
Going back to that record, at the time, [my oldest daughter] was probably two. She came to me at a great time in my life. If it wasn’t for [her], I probably would have lived a real ruthless life, and who knows where it would have ended? I think she straightened me out. There’s a lot of crazy adventures and things that happened to old-school hardcore guys, because we were living pretty much a criminal lifestyle.

Is there any video footage of that show?
I found a video of that whole show. I’m in the middle of transferring it to DVD. I want to release it. It’s the actual show, that historical album. That footage is all right from the stage. You get to see me saying the speeches you [hear] on the record. One-camera shoot, right  from the side of the stage, the whole damn show. There was another shoot, not from the same album, the show where they got the video for “Anthem” that came out when I was incarcerated.

What happened when you went to jail? It was a drug charge, essentially, right?
It was a drug charge. There were other things tied to it. They put everything together. It was tied in with a major incident regarding some big crime families in New York. I don’t like to mention names. I was just a delivery guy. It was hypocritical, because I’ve always been more of a straight-edge type of guy; I don’t think I’ve had a drink in three years.

You’re a positive person, so what led you to get involved in that line of work?
The birth of my child. I wrote a [Agnostic Front] record called One Voice, and if you read those lyrics, it’s a diary of that. One of those songs, “Now And Then,”  explains the whole thing, how I got there.

My upbringing was harsh. We grew up in ghettos. My mom worked hard to get us out of it. We grew up in the system, on welfare. And I felt like it was all happening again to me: Here I am, living in squats, in abandoned buildings. My ex was pregnant. We had three pit bulls for protection, to guard against any drug dealers that came into the place. My daughter’s gonna be born. I have no money. I’m playing in a punk-rock band that makes no money. So I said, “Let me go make these trips.” I knew it was a delivery, but I thought I would get away with it, because I got away with so many other crazy things. I got set up, and that was it.

I was up for 25 [years] to life, and then it separated with 4 to life. And then, when I was incarcerated, I caught another two years. But I had a very good attorney.  You kept your mouth shut like you’re always told, like I’ve always done, and you get through.

How did you catch the next two years?
That’s one of those things: When you’re locked up, you’ve got to pick a side. You’ve got to do what you’ve got to do to keep your head above the water. And unfortunately, something came my way, and we had to take care of it.

How were things different when you got out?
I knew one thing for sure. I started working with PETA [People For The Ethical Treatment of Animals] because of all this stuff. I was fighting dogs [before the arrest, then after] I didn’t want to put any animals in any cages, because I knew what that was like.

Do you still tour-manage Agnostic Front?
I tour-manage all my bands, do it all. I think it’s much better [to be] hands-on. A lot of people just have managers because they want a bad guy. They don’t have the balls to say no, or they want more.  Someone in the band is always calling the shots—trust me when I tell you that. A tour manager’s not just a jerk to be a jerk. He gets paid to be a jerk. And by being hands-on, there’s better communication, and we get what the band really want.

What do you do between tours?
I also run a clothing line called American Made Kustom with my buddy Todd [Huber, also an Agnostic Front artist]. I run my car club, Rumblers Car Club. I’m very busy.

I’m also a licensed electrician. I’m a certified Harley-Davidson mechanic. I got my electrician license in prison, believe it or not. When I was a kid, my dad was a mechanic. We owned a service center. I realized when I was touring: The only way to stay alive is hard work. When I come home, I always make sure I’ve got work lined up . The key to that is the same thing with the music: If you’re a good person, you’re passionate, you’re 100 percent into it, and your employer or people know you’re really good, they’ll hire you.