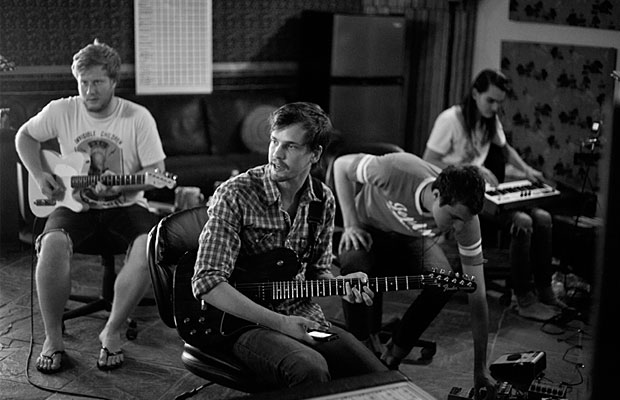 THE MAINE recently recorded a new album with producer Colby Wedgeworth at Sonic Ranch in El Paso, Texas—a.k.a. the same pecan ranch where their fall tour mates Taking Back Sunday recorded their new album. Several weeks ago, frontman JOHN O’CALLAGHAN checked in from the studio to give AP a progress report. “I’ve had a ton of material written for awhile now,” he says. “[I’ve] just [been] gathering it while we’ve been on the road. Recently, I moved in with Garrett [Nickelsen, bass] and Kennedy [Brock, guitarist] and a couple guys from Austin Gibbs’ band into our manager Tim [Kirch]’s office. We kind of took over the place, built bunk beds and are shacking up there in Phoenix. We were just writing and demoing and now we’re out here. Who knows where it’s all going to end up?”

Concrete details about this album, the Maine’s third full-length, are still up in the air, although O’Callaghan says the release’s vision is focused. “This is a representation of who we are as a band, without the outside hand, without everyone who thinks they have the Midas touch touching it,” he says. “We didn’t think about it too much; we just wrote songs, and we recorded them. We’re not over-thinking it; we’re not keeping anybody in mind except ourselves.” Last week, Callaghan gave AP a better idea of where things stand—a few days before he headed to Sacramento, California, to finish up the album’s vocals with Wedgeworth.

You announced a tour with Taking Back Sunday, which people are very excited about.
I can’t even put it into words. It’s very surreal. [Tell All Your Friends] was one of my first records I ever bought and one of my first concerts I ever went to was Taking Back Sunday and the Starting Line.  When I found out they actually wanted us on [their tour], I was like, “Are you serious?”  We’re really, really excited.

We played a show with them in Florida and got to meet the guys, and it was just like [Laughs], “I’m not really acting this way. I’m in complete awe and shock.”  Now that the original lineup is back together, it is going to be a treat for us every night. I have a tendency to not watch bands on tour. It’s just this thing; I don’t know why I don’t, but I know I’m going to be on stage every night watching them play. Very, very stoked.

What new things can you tell us about the new album? What is the latest on everything?
The full album won’t be done for probably another couple weeks.  We just have to mix and master some stuff. I would imagine it’s going to come out—don’t hold me to it, but it would probably come out at the tail-end of the tour with Taking Back Sunday. Hopefully, we’ll have a song out by the time we are on the road and just start letting people know that we are putting out an album. As far as a specific date, I don’t have that, because I think we are still in the process of figuring out all the marketing and stuff like that and getting okays from everybody.

As far as the songs are concerned, I’m really excited about how they turned out. I don’t think it’s what people are expecting to hear from us. For us as artists, I think it’s an imperative record to put out.  We need to take it to where we took it right now in order to open up doors in the future for us, as far as our sound is concerned. It’s a lot more rock ’n’ roll driven. There’s still some twang in there as far as American country or American pop goes. We tried to make a balanced record. We didn’t try to overload it with a bunch of in-your-face rock songs about whatever, you know, depressing stuff or dark stuff.  There’s fun tracks in there. It’s so hard to put it into words. I’m really excited for people to hear it. I’m really anxious to see how they feel about it and anxious to hear what they think. Most importantly, this record’s for us and for those fans that have kind of stuck by our side, no matter what our songs sound like and no matter what style we kind of jump into.

It’s interesting that you say it’s the record that you guys need to make at this point. Is that in terms of just growing your fanbase or just keeping yourselves challenged?
What I’m really trying to say is we have been talking for so long about how we don’t want to be clumped into a category with other artists. I just think with so much music out now, and just so much drab, watered-down, diet soda music…. I’m not saying that our music is groundbreaking on any level: I just think as far as our band’s concerned and far as our message is concerned, I think this is the time when we need to stop talking about everything and we need to actually write the songs that we want to be represented by.

It’s definitely not “Girls Do What They Want,” and it’s definitely not “Everything I Ask For.”  If we continued to write stuff like that, it’s not benefitting anybody. It’s not benefitting us as artists; it’s not benefitting the listener. I think growth is necessary, I think change is necessary. You can’t be 16 forever, so I think it’s just time to grow up and it’s time to say what we want to say and sound like we want to sound. And if that’s not cohesive with what people want to hear, then I’d rather fail at doing something I firmly believe in and firmly enjoy and am passionate about then be another…. I don’t even want to get in trouble by [mentioning] any artists. I tried to turn on the VMAs the other day, and I watched it for two seconds. I can’t even be part of the institution of what that’s all become. It’s just pop culture is very depressing nowadays.

For a band like you guys, you came up in a specific scene and the scene, in a way, has had trouble growing up and figuring out “Where do we go?” You guys are not alone in that, trying to figure out,  “How do we grow up without alienating people? How do we show people that we’ve evolved?” So many bands are struggling with that right now.
I think we are very fortunate to have been able to tour with Augustana, our buddy Austin Gibbs and this Taking Back Sunday tour with Bad Rabbits.  Like I was saying, you can talk, talk, talk about who you think you are or who you think you want to be, but at the end of the day, nobody is going to listen if there is nothing to back that up.  Just being able to tour with Augustana and really realize how important musicianship and songwriting are, and getting a story across or saying what you want to say. I’m really excited to be out with Taking Back Sunday and try to learn as much as I can and soak it all in and see the things and the reason why they have been a band—and a successful one—for so long.  And just try to pick up on things and pick their brains for information, the good and the bad.  We are very fortunate that we’ve been able to do these past couple tours and hopefully after this one, somebody else takes notice and hears the new stuff and we take another step away from just those same five bands who we’ve toured for the first three years of our bands’ career.

Even though I say pop culture is depressing, it’s very exciting and we are very optimistic about where we think these songs can take us and where these tours can take us.  So for us, we keep that out of mind, out of sight and stick to what we’re feeling right now and adjust accordingly afterwards.