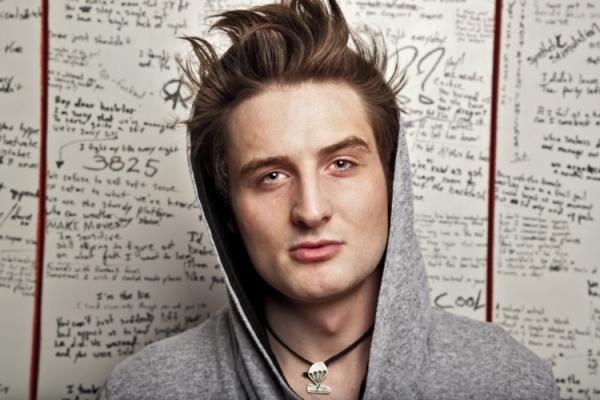 At 2:36 a.m. on August 18, CUTE IS WHAT WE AIM FOR founding member and frontman SHAANT HACIKYAN entered an unexpected Twitter update. The message: “I’m going solo. Thank you for every inkling of support.” While fans may have been caught off-guard, it came as no shock to those close to the band, which had been falling apart during the months prior, according to our interview with former CIWWAF bassist Dave Melillo who said that, “The blame can be put on one person.” That person was Hacikyan, who reveals in this exclusive first interview since announcing the band’s comeback (with an entirely new lineup) that his struggles with alcoholism contributed to the dissolution of Cute as we know it. But armed with a new team, new songs and upcoming tour with the Friday Night Boys, Hacikyan says that he’s also equipped with something far more important–a new perspective.

What exactly had been happening in the time leading up to your tweet about going solo?
We got home [from headlining the 2009 Take Action! Tour] in April, and it ended up being idle time in the devil’s playground. We spent our time partying with friends we hadn’t seen while [we were] on the road and lost focus of our music. [CIWWAF] sat down and all decided it was best we stop working together. At that point, I figured I couldn’t stop. I had to keep going. Then I realized that I had some serious issues with alcohol abuse [and it took] waking up in a pool of blood one day to decide I needed rehabilitation. My world was coming down on me from the depression and alcoholism, and then my baby–my dream— was falling away. I understood that it was all my doing through my abusive actions with substances. I went to rehab in October and joined some friends afterward to work on their project, but it kind of turned into something more. However, I was battling depression and it was getting dark. We were writing acoustically because I needed an outlet, but I didn’t know if in my current state would [allow me to] continue doing Cute or anything along those lines. Then the five-year anniversary of the band starting in my bedroom came around [on January 3], and I decided I couldn’t quit because this opportunity was too great.

You woke up in a pool of blood?
It was a morning in September. Yes, I woke up in a pool of blood and couldn’t remember what happened. Luckily, my friend came in, dragged me out of the house and took me to the emergency room [where I was evaluated] for four hours. I still have a piece of glass lodged in my skin. Its weird, but the scars are definitely a reminder for me to keep going ahead full steam.

How would you compare yourself before entering rehab to now?
I learned humility. It’s the one thing I know for sure I’ve learned. You have to acknowledge your issues before you can address them. It’s great because I’ve carried this through to my outlook on life and it’s really helped me to take a step back and not fuel the gossip fire like I used to.

While all of this was going on, you mentioned you were working on music. Was this your outlet during all of this?
Music was what brought me out of depression–outside of medication. I needed something happy and positive in my life and I get that from music. It’s the one skill I have in life-[playing in] the NHL is just not realistic. [Laughs.]

Was there ever a time when you thought you about giving up music?
Absolutely–at least once every day until quite recently. I mean, you’ll always have your doubts, but for now, I’m confident and sound in body and mind. It’s crazy how alcohol treats your voice and I never addressed it. I just drank more to kill the pain. It was really bizarre, and I find myself laughing and crying inside from my old actions. I did a lot of things the wrong way, but I’m going to say I’m glad it happened when I was young and I know now not to do them again.

In January, it was announced CIWWAF would be making a comeback with you at the helm. Does this mean your solo project is no more?
It became enveloped in Cute. Cute is my baby as I will always call it. It’s the one thing I can say I made on this earth and I have a group of people close to me who believe in and support me. We worked together on songs. It’s good to have people with you. They saw me at my darkest and stuck by me as I pulled out of it. With people like that, you just can’t stop.

Mike Novak? How did the two of you come to work together?
When I decided that I needed to begin [making demos of] these songs in the studio, I knew I needed the expertise of a great drummer. It just so happens that we share some mutual friends, so I asked him to help me record the demos. We started working together, realized we come from a common background of “been there, done that” and now we’re home. Using this connection, we decided we could do it again if we tried. The cool thing about Novak is that, [growing up in] Buffalo, I’ve had posters of ETID on my walls since I was a young teen. I don’t know how I got this lucky.

What made you decide to keep the name alive?
I can answer with the B.S. answer that it’s something that’ll never die and always be a part of me. While that is true, I know there’s more to it than that. There has been so much time, money, effort and love given and put into this band that I would feel selfish throwing it all away.

How would you compare the new songs to the what we’ve already heard from CIWWAF?
Looking back, [the 2008 CIWWAF album] Rotation was my cry for help. So much of that album is about self-hatred and even when I tried to pick myself up, I failed. I didn’t completely connect with it. [Producer] John Feldmann took over the music and I took the lyrics while getting deeper and deeper into alcoholism. This new album is more like [CIWWAF’s 2006 debut The Same Old Blood Rush With A New Touch] where I had my hands in everything. I’ve been a part of every aspect of it. I’m a fan of music you can put on in your car and roll down your windows with. That’s what we’re making. It’s music that will make you smile and bop your head along the way. That was the probably the first time I ever used the phrase “bop your head.” [Laughs.]

When can we expect to hear some of it?
I’ve always been a huge supporter of playing music people know live. They pay to come and see what they love, so I really want to have something out before we hit the road. I mean, what a bummer when you see a band you love and they play five new songs nobody’s ever heard.

What can you tell us about your comeback tour with the Friday Night Boys, the Bigger Lights and Down With Webster?
This time around, I know I needed a very positive bill. I’ve known the Friday Night Boys for a long time. After I asked them and they accepted, I knew we could possibly get some other bands I loved. So we went to the other bands and pitched the tour to them and got the okay from them as well. It was a very kid-in-a-candy-shop situation. One time on tour, I thought we had booked Carolina Liar for [the Take Action! Tour], and when we got to opening day, we found Breathe Carolina. That wasn’t a bad thing. The Breathe Carolina guys are a lot of fun and great dudes, but that really was a wake up call to how bad my abuse of alcohol and negligence had gotten.

Would you say you’re more excited or nervous to get back on stage?
Whenever someone asks if I’m nervous, I’m not–until you remind me of it. [Laughs.] I’m really excited to explore everywhere we’re going to go now. I’m going to be a total tourist this time around because I took [it for granted the] last time around. The one thing that is really driving this tour is empathy. When you take a step back and think of everyone that your decisions impact, you want to make sure everyone benefits and is treated fairly. So I always try to convey that empathy is key. Even if you don’t agree, as long as you show empathy, the world can be better.

What can we expect after the tour?
I’ve given it a lot of thought and in keeping with empathy, Cute will keep going as long as it feels right. As long as those who support us continue to support us, we’re going to be full-steam ahead. We’ll keep writing and touring. It’s a dream job. alt