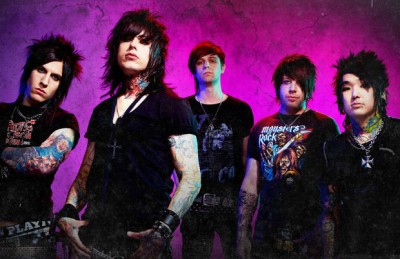 AP had the chance to check in with Ronnie Radke a few weeks ago, as he was preparing for the release of Falling In Reverse’s debut album, The Drug In Me Is You. The album is out July 26 via Epitaph Records, but Radke gave us some exclusive details about the release below. Stay tuned to Altpress.com next week to find out where you can find more of AP’s interview with Radke.

One of the songs from the album that stood out to me was “The Westerner.” The lyrics were so personal. It seems like they could be directed either at Escape The Fate or maybe your problems with drugs. The metaphors could go either way.
I would say it’s directed at both things. The first verse starts out [talking] about [the problems of] my younger years, and then the second verse is about me being incarcerated. The third verse is totally arrogant, [it’s something] like rappers do mostly. A lot of rock musicians don’t really do those kind of lyrics, what I did in the third verse.”

You see that in hip-hop lyrics.
I’ve thought about doing that for so long. Eminem is one of my biggest influences. A lot of people really don’t know that, but if you listen to the lyrics, then you will understand. You’ll be like, “Oh, okay; now I get it.”

Which era of Eminem is your favorite?
Everything except Relapse. I like his new record; it’s probably my favorite. [I also like] The Eminem Show, The Slim Shady LP and The Marshall Mathers LP.

He is someone who has been knocked down and knocked down, and he’s gotten back up again. Time and time again. And he’s triumphed.
Exactly.

I can totally see how you would relate to that. What a long genesis this album has been, for you to be able to hear these songs fully fleshed out and singing them. Listening to the album, it doesn’t seem like a “jailhouse record.”
Yeah. A lot of people are going to expect me to be singing about prison in every song. But I don’t—there were a couple songs that didn’t make the record that were about it.

Did they not fit with the theme?
There were just better songs.

What have the people who have heard the record said to you about it?
A friend of mine, he’s, like, a metal dude—he just likes metal. He’s not really into that kind of music. He looked at me straight in my eyes [and] he was like, “You’re coming out swinging. Over the last 5 years, this is one of the best things I’ve heard.” Coming from him, [it] was like, “Wow, dude.” Even my dad—my dad was being straight truthful with me: “Your voice got better, your screaming got better, [you have] better song structures. Everything’s better.”

That must mean a lot, coming from him.
He doesn’t really talk about that stuff to me.