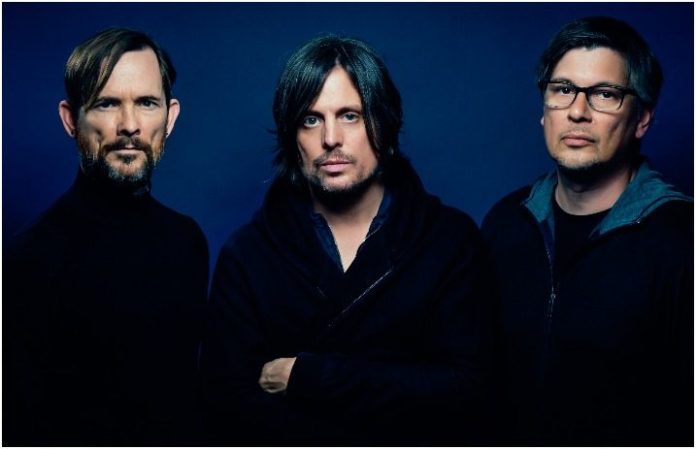 Failure, the L.A.-based trio who have gone far to expand the parameters of rock since their inception in 1992, have returned. Today AP is premiering the video for “Dark Speed,” a track from the band’s new EP, In The Future. The clip—directed by guitarist/vocalist Ken Andrews—finds actor David Dastmalchian (Blade Runner 2049, Twin Peaks, Gotham) in an obtuse situation involving hotel rooms, the potential for drug abuse and checking out another method of personal enlightenment altogether, much like space-jump icon Felix Baumgartner. “David Dastmalchian is one of our favorite actors, so it was a true pleasure to make the first Failure video without the band in it with him,” Andrews says.

Over the course of four studio albums, Failure—Andrews, multi-instrumentalist Greg Edwards and drummer Kellii Scott—have been tagged as everything from shoegaze to noise rock to progressive rock. The trio use pedals and synthesizers to couch their songs in a multi-directional ambiance that can be both psychedelic and tense AF (sometimes within the same song), but still remaining guitar-driven. Many musicians cite the band’s 1996 release Fantastic Planet as crucial to framing textural possibilities in their music. Andrews has done mixes of records by Paramore, A Day To Remember and Jimmy Eat World among many other bands. Edwards’ ongoing post-Failure outfit Autolux have released three albums and did a stint of touring opening for Nine Inch Nails. After dissolving in 1997, Failure regrouped in 2013, recording and touring in support of their fourth album, 2015’s The Heart Is A Monster.

In The Future (which is out today) is the first installment of a series of three EPs Failure will be releasing at various intervals this year. The band will be compiling songs from these releases along with additional music for a release sometime in the fall. From the terse motorik of “Dark Speed” to the Pink Floyd worship of “Pennies” to the layered ambiance of “Segue 10,” Failure are plotting alluring sonic adventures in an age of seeming indifference.