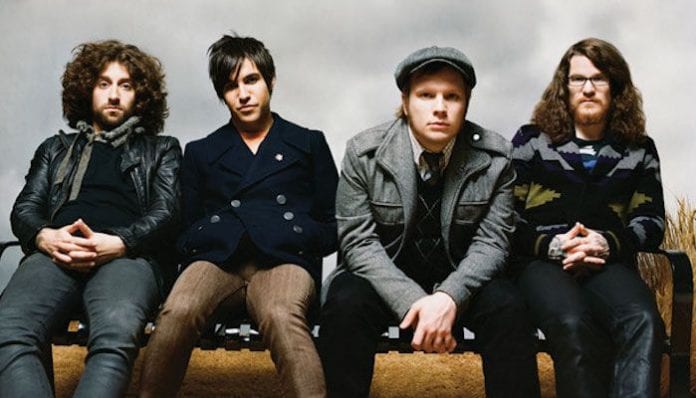 When Fall Out Boy released their fourth record, Folie À Deux, in 2008, they were no strangers to pissing off fans and baffling critics. Their stylistic changes, both musically and aesthetically, from album to album are notable and clear: Take This To Your Grave is a pure, if not standout, pop-punk record; From Under The Cork Tree saw them embracing verbose writing and emo aesthetics; Infinity On High took inspiration from hip-hop and soul.

But for many, Folie À Deux was a step too far, something Patrick Stump said himself in a blog post when he called it their “most critically panned” album, noting that “audiences openly hated it.” It was the album that appeared to usher in the band’s hiatus in 2009, which lasted until 2013 with the release of Save Rock And Roll.

Folie was further from emo or pop punk than the band had ever been. Gone, for the most part, was the inward-facing, self-flagellating, poetic lyricism that attached “emo” to them in the first place.

Folie À Deux’s first track is “Disloyal Order Of Water Buffaloes,” named after a Flintstones reference, proving the band hadn’t ditched their love of geeky inside jokes. But that’s the only similarity, really, as it opens with nothing but an organ and Stump’s ever-soulful voice.

The drums and guitar kick in eventually, but with a prophecy for what’s to come, as Stump sings “Perfect boys with their perfect lives/Nobody wants to hear you sing about tragedy.” And, sure, maybe some people didn’t want to hear successful men sing about just how hard their lives are.

By the time Folie À Deux was released, the members of FOB were all grown, far from the heartaches that had informed their first two records. And with the pressures of fame less new than they were when Infinity On High was released, they didn’t have to sing about that, either.

So Folie À Deux had to be different from everything people thought they knew about Fall Out Boy. Pop, soul, hip-hop and other influences had shaped their career thus far, but the album still sits awkwardly outside of the Fall Out Boy canon: shunned by mid-2000s purists who only accept the first three records, and ignored by teenagers who got into the band post-hiatus.

Lyrically, the record was intended to not be about the members’ lives, as they believed “everyone was doing it.” First single “I Don’t Care” is a “narcissist’s anthem” and a rumination on fame.

“(Coffee’s For Closers),” too, explores narcissism and apathy, with Stump singing “I will never believe in anything again” over and over. He explained that he believed “the past decade had been totally about [him].”

“America’s Suitehearts,” is also preoccupied with fame and celebrity, while “27” is more personal, about Pete Wentz’s friends’ fears that he would join “the 27 club.” None of these are new themes for Fall Out Boy, who have always struggled with their own fame, but Folie shows them looking outward.

The lyrics are political, too. On “20 Dollar Nose Bleed,” Stump sings “Came back with flags on coffins and said/‘We won, oh we won,’” in an overt reference to war. In their growth, the band stopped dealing with their own pain and pressures. They also stopped looking at celebrity, political and romantic culture as a whole.

To promote Folie À Deux, Fall Out Boy released Welcome To The New Administration, a under-referenced mixtape that is as experimental as the album itself. The 26 tracks reference the band’s hip-hop influences and interests. They featured artists and guests as disparate as Ludacris, Seth Green and Guy Ripley.

Administration is, for the most part, promotional material for the record and Decaydance (now DCD2) and Fueled By Ramen artists, featuring raps, spoken word, half songs and demos. It’s part of a campaign that began when an organization, Citizens For Our Betterment, “hacked” the Decaydance website. Clues started appearing there and on Wentz’s personal blog.

Wentz’s then-wife Ashlee Simpson was later seen carrying an organization pamphlet, and, ultimately, all clues led back to Nov. 4. This was the U.S. election and the band’s scheduled return date, marking the mixtape as another political statement; it also featured “We Believe In (Barack Obama)” and showed the band dressed like political campaigners on the cover.

While Folie À Deux may be cynical and political lyrically, musically, it is full of starry-eyed, theatrical optimism, darting between styles, with Stump belting into soulful vocals on songs that sound closer to Broadway musical numbers than pop punk. Every track is radically different than the one before.

“20 Dollar Nose Bleed,” featuring Brendon Urie, is a folk-esque, near homage to Panic! At The Disco’s Pretty. Odd. “Headfirst Slide Into Cooperstown On A Bad Bet” builds like the musical number of a vengeful lover; as Stump tells it, it has “swagger” musically to accompany Wentz’s lyrics about infidelity. The song relies on a drum line, guitars, a four-piece horn section and a piano breakdown. It all builds to Stump yelling “Does your husband know?” over and over.

Despite the ambition, joy and breadth of Folie À Deux musically, the recording process was far from easy. Wentz was reportedly taking LSD during writing, thinking it would help his work, but ended up distracting him from it. The band fought throughout its creation. While it wasn’t something new for them, it reached new heights.

The band intentionally cut short their recording time. It forced a return to their early days of a rushed, desperate creative process, more akin to a hardcore band. That fighting did lead to their most collaborative album, after Hurley approached Stump to communicate concerns that he didn’t feel appreciated or a part of the band.

The joy in Folie À Deux, if there isn’t enough to be found in its attention-deficit style and musical-esque drama, is in its hidden clues. As with all Fall Out Boy records, you can comb it for secret meanings. The band released final single, “What A Catch, Donnie,” one month before their final show. It’s a prophetic ballad that appears to signal the curtains dropping on Fall Out Boy’s first act. Wentz wrote the lyrics “for” Stump, and it’s a simple, sad song that for the most part, says quite little.

But toward the end, friends of Fall Out Boy— Urie, Gym Class Heroes’ Travie McCoy, the Academy Is…’s William Beckett, Cobra Starship’s Gabe Saporta—sing lines from the band’s singles in the style of Stump. New Wave icon Elvis Costello sings the band’s first reprise. It’s a “Headfirst Slide Into Cooperstown On A Bad Bet” section, in a style almost indistinguishable from Stump. Wentz called the decision to have cameos necessary, stating “they serve the purpose of a character in a musical.”

The video contains even more nods to their hiatus. Stump sits at a piano alone on a ship, befriending a seagull before pulling FOB memorabilia from the sea. Among them are “Sugar, We’re Goin Down” antlers, his “Dance, Dance” suit and the “Thnks Fr Th Mmrs” sign.

He sees a burning shipwreck and rescues old colleagues, including his band and Urie, from the sea; they party and hug as the burning ship goes down. Fall Out Boy’s videos have always been self-referential and self-mocking. They make fun of themselves and the scene that brought them to our attention.

But “What A Catch, Donnie,” while as clever and as self-referential as the video for “This Ain’t A Scene, It’s An Arms Race” or “Thnks Fr The Mmrs,” is something altogether separate: It is a eulogy. It is a sincere funeral pyre, a goodbye to the band that they once were.

Shortly after, from the Madison Square Garden stage, Mark Hoppus shaved Wentz’s hair. It signaled a cleansing of the era that had been so tied into that poker-straight side fringe.

Fall Out Boy never wanted to represent emo. As the scene died, they released an entirely new album full of huge musical tracks. It left their fans struggling to reconcile their image of FOB as emo kings with the soulful ambitions of Stump.

Their decision to take a break stemmed from disillusionment with the music industry and their image. At the time of the hiatus, Stump had gained weight. Wentz was also grappling with drug abuse and divorce, and they all needed time away.

While on hiatus, they worked on side projects and their own lives. Both decisions ultimately benefitted their well-being and the music they would come back to make. It was the right decision, but one that fans didn’t take well.

It’s a shame that fans struggled to love Folie À Deux as much as it deserved. Expanding album to album, year to year, FOB were always going to outgrow the small fishbowl they had once dominated. But it’s an indication of their potential and talent, an off-the-wall potential that they would return to with their post-hiatus record Save Rock And Roll in 2013 and really hone in on with 2018’s M A N   I A.

If you take away your expectations of Fall Out Boy, Folie À Deux becomes far more than their modest beginnings as a pop-punk side project had ever promised. It’s an ambitious, unusual album that stands apart from their oeuvre in many ways. It shows them at their most optimistic and cynical, ambitiously reaching for full potential while signaling their complete, utter end.

In their self-referential cynicism, Fall Out Boy always laughed at themselves before anyone else could. But the mood after Folie’s release and during their hiatus showed that the constant touring, hard work and mockery had taken a heavy toll on the band. Appreciating Folie now is too late, but their most recent record shows more signs of the ambition of that era. As such, the least we can do is embrace Fall Out Boy for where they are right now.