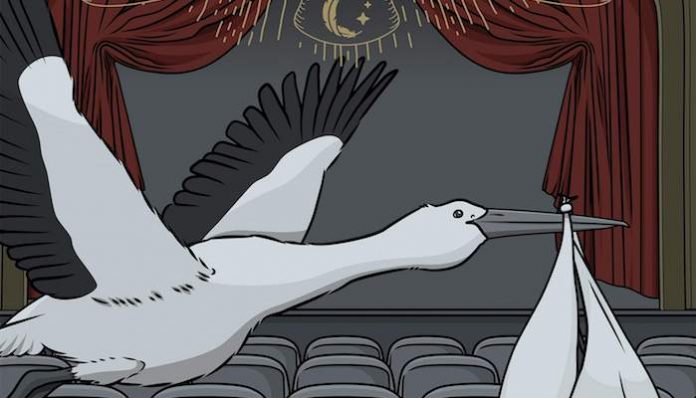 If you’re a punk who just so happens to struggle with bouts of insomnia, look no further than Sparrow Sleeps, who famously turn emo tracks into lullabies. Alternative Press is proud to premiere their latest project, From Under The Stork Tree, an album of soft covers from Fall Out Boy‘s sophomore record to literally rock you to sleep.

In the past, Sparrow Sleeps creators Casey Cole and Peter Lockhart have collaborated with Panic! At The Disco, Weezer, Thrice, State Champs, Paramore and Third Eye Blind, among other scene heavy-hitters, to deliver sleep-inducing renditions of their songs.

The Indianapolis-based project initially came to life seven years ago when Cole celebrated the birth of his daughter, Sparrow. He was bored of playing the same old lullabies night after night when she couldn’t fall asleep.

However, Cole worked at a local record shop in high school and knew many old-school and new-age rock, metal and emo albums well. He decided to transpose a Saves The Day track with bells and shared it on Bandcamp. In less than a day, 20,000 streams popped up. Since Lockhart joined Cole in 2014, Sparrow Sleeps have churned out 60 albums with the blessing of several artists.

Read more: There’s only one way Halsey will make a punk rock album

This also isn’t the first time they’ve collaborated with Fall Out Boy. In 2017, they covered “Saturday” for the album Take This To Your Crib. Additionally, FOB reached out to the duo for a lullaby cover of “Bishops Knife Trick” to play over the loudspeakers at their hometown pop-up shop and MANIA Experience.

Today, they’re exclusively premiering the take on From Under The Cork Tree before it’s available on Spotify beginning Nov. 16. Check out From Under The Stork Tree and the full interview with Sparrow Sleeps below.

How do you go about rewriting these popular emo songs? What’s your process, and how do you pick the instrumentation for your songs?

CASEY COLE: When Peter and I decide on what artist to cover next, the brainstorming starts. Punny titles are our schtick—turning an album title by the artist into something that references sleepiness or babies. From Under The Stork Tree, Pray For The Restless, Quieter Now… After we have an idea, that’s where we get to transposing. Some songs morph into lullabies with ease, and some songs just don’t. I’ll never forget the Senses Fail album that we did, The Crier instead of The Fire, and thinking how ridiculous it would be to hear those songs as lullabies. That is one of the most beautiful records we’ve released, and I expected it to be so dark and depressing. For instrumentation in the songs, it’s fallen into place over the past few years: harps, strings, celestes, pianos and glockenspiels. We’ll pepper in some marimbas or vibraphones or some organs. Our job is to put your little one to sleep, and we’ve honed our method.

Read more: Fall Out Boy fans are still trying to figure out that line in “Dance, Dance”

The one thing we really pride ourselves in, though, is staying true to the songs. We don’t cut anything out, and you can see that in our recent release of Coheed And Cambria lullabies. Some of those songs are almost 12 minutes long now, and all of those guitar solos were transposed onto marimbas verbatim. Our lullaby rendition of “Blood” by My Chemical Romance starts off with two minutes of silence because it was originally a secret track. If we give a band the Sparrow Sleeps treatment, we’re definitely going to go all out.

How did you decide on From Under The Cork Tree for this collaboration with years of discography to choose from? Obviously, fans enjoyed Take This To Your Crib, so was this simply the next logical step?

COLE: We released Take This To Your Crib almost three years ago. It was one of the first releases we did where we covered an album from start to finish. From Under The Stork Tree has been discussed ever since, and this year it just came to fruition. So many rippers on that album, too.

PETER LOCKHART: We’ve been sitting on the album title for three years knowing that we were wanting to do this as a follow-up Fall Out Boy full-album cover at some point. That said, I had the artwork mapped out in my head the whole time. It just came down to putting in the time to knock out the illustration for it.

Tell us more about your experience with the band during the MANIA tour. Was there a reason “Bishops Knife Trick” was specifically chosen to reimagine? How did fans react to your lullaby song when it was implemented into FOB’s pop-up experience?

COLE: We were asked by their management to create a lullaby rendition of that specific song, and you don’t say no to that request. I saw videos posted on socials back in the fall of 2018 from the lobby where it was playing, and one of the eleven rooms in the pop-up shop had music boxes and headphones where the lullaby was playing with other soft renditions of FOB tunes other artists had created. I’m pretty bummed I didn’t get to experience it for myself.

What do you hope listeners take from the reimagined From Under The Cork Tree? Do you often hear reports of grown-up scene fans being soothed to sleep, as well?

COLE: Like all of our releases, we want the listeners to sleep. But we really hope that the listeners see how much detail we put into everything. We love these songs that we cover, and we hope that those feelings carry over to the listeners. We see a lot of college-age kids listen to us while they study, and that’s so cool. It’s difficult to focus on calculus when “Deadbolt” by Thrice is playing in the background, but now kids can do their math homework with our much more chill rendition. We’ve also had a lot of teachers reach out and tell us they play our covers in their classroom at times [when] they need to keep their younger students quiet or focused.

What was the most challenging and most rewarding part of recreating this famous emo album? Can we expect any more FOB lullabies in the future?

COLE: It’s always challenging recreating an artist’s songs that you genuinely care about. Fall Out Boy are so close to home for us, as are bands like My Chemical Romance, New Found Glory and all of the artists that we choose to lullaby-ify. But it’s also pretty rewarding when we get to see how many people our releases have affected. Whether it be the first-time parents that now have a comfortable outlet for rocking their newborn back to sleep or the college students on their all-nighters before a midterm exam or the fans of the original artists that find these renditions soothing, we see continual love for the project, and that’s what keeps us going. We don’t plan on stopping anytime soon.

Read more: 29 scene song titles so long you’ll have to stop to take a breath

As for expecting more FOB lullabies in the future? There have been talks about just doing the entire Fall Out Boy discography. Peter and I grew up listening to these guys since high school. I don’t know if the whole discography will happen, but it’s not farfetched to think that we’ll be releasing Infinity On High Chairs in the coming years.

Do you have a favorite emo lullaby you’ve worked on so far? If yes, which song or album?

COLE: If I go back and listen to the discography, I’ll wind up on our album of the Wonder Years lullabies. I’ve been on a continual TWY kick for the last four years or so, and I’m not mad about it.

LOCKHART: At this point, we’ve covered the majority of the bands that have had the biggest impact on my life since I was a teenager, so picking my favorite lullaby version is nearly as hard as picking my favorite of the original albums that span over 20-plus years. The albums that have been the most fun to work on have definitely been the ones like Thrice, Paramore, Fall Out Boy and Panic! At The Disco, where the artists and their management have been more involved.