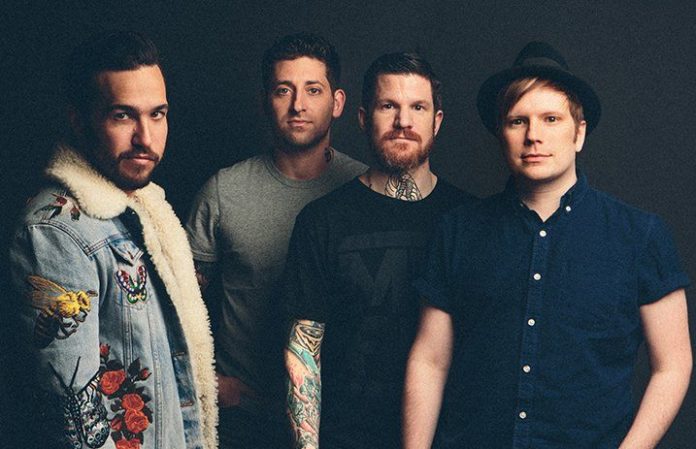 Fall Out Boy are fully prepared for you to hate Mania (stylized M A N   I    A), their seventh studio album. Their pre-release press tour has felt apologetic: At shows and in interviews, the band have reiterated that this album will require a few listens to get into. It isn’t that they have no faith in the record; after pushing it back several months, they seem to finally love it, but are very aware of the criticisms that will always accompany their releases. Torn between old-school, die-hard Under The Cork Tree fans, fans who were barely born when Take This To Your Grave was released, critics and the general public, Fall Out Boy will never please everyone. And with Mania, they’ve opted to please no one but themselves. The result? The best album they’ve released in 10 years.

Admittedly, it took a while to see that. With the first single, “Young And Menace,” the band debuted not only a more EDM-inspired sound, but a baffling new aesthetic of purple, neon and…llamas. They seemed a little lost; it was hard to have faith in something that was so visually and aurally abrasive. The video for the next single, “Champion,” used the same aesthetic, but the song itself was, as the band promised, less “kittens chasing lasers” and more anthemic, along the lines of “Centuries.” They’ve since released three additional singles; a love song “The Last Of The Real Ones,” the reggae-inspired “HOLD ME TIGHT OR DON’T” and “Wilson (Expensive Mistakes),” whose video is full of callbacks and references, a gift to the hard-to-please longtime fans who still are listening.

What these vastly different singles all showcased is that Fall Out Boy still refuse to be confined to any one genre. However, while enjoyable, it wasn’t until this writer listened to the album in full a few times that its sonic intentions began to reveal themselves. The thing that is unique about the best Fall Out Boy records is how much repetition and digging it takes to feel as if you are really getting it. When I first bought From Under The Cork Tree I sat on the floor for hours, deciphering the lyrics and trying to unpick an album that I still believe sounds unlike anything else. While Save Rock And Roll was a successful comeback that secured the band a new generation of fans, both it and its follow-up American Beauty/American Psycho felt uncomplicated. They’re both technically good, but there was something missing; the acceptance that Fall Out Boy were now making music for a new generation.

Until now. The beauty of Mania is that it is so completely batshit, so initially obnoxious, that it begs for five or 10 re-listens to really appreciate it. The album tracks are as standout as the singles; “Stay Frosty Royal Milk Tea” opens with a Tonya Harding reference and, inexplicably but delightfully, ends with Patrick Stump yelling “Are you smelling that shit! Eau de résistance!” followed by an explosion sound effect à la the Lonely Island. That is in no way a criticism; Mania is a rollercoaster and an exercise in everything that Fall Out Boy really want to do. They’ve pushed the boat out on every genre, every sound effect, every reference. They know that they’ll be criticized no matter what, so why not do whatever they want? The choices Fall Out Boy have made throughout their career—and especially on Mania—have been consistently brave, sometimes admirably ridiculous and very much their own.

The track “Church” is jam-packed with Stump’s trademark vocals, religious references, organs and a choir. It clearly signals a return to an Infinity On High-era semi-obsession with churches. Continuing the theme, it’s followed by “Heaven’s Gate,” a ballad-style love song that is essentially just the line “give me a boost over Heaven’s gate,” throughout, but manages to fully showcase Stump’s voice. “Sunshine Riptide,” another reggae-inspired track, features a verse by Burna Boy and half-raps by Stump. The album closes with “Bishops Knife Trick” (an Aliens reference, lest we forget Pete Wentz is a bit of a nerd), a strong pop song that proves they are still very, very good at appealing to a wide audience while doing exactly what they want. The joy of Mania is not only that it’s silly; it’s a legitimately impressive, multi-layered record that shows off everything Fall Out Boy have always been great at conveying.

Mania won’t please anyone who’s refused to listen to Fall Out Boy in 10 years, but it wasn’t made for them. Fall Out Boy made it for themselves and for the people who are willing to give something a chance, to pick apart what makes it good and to appreciate the absolute off-the-wall bravery and creativity it takes to put something like this out after 15 years of being criticized and underestimated as much as they have. They have never been the band you think they are; they immediately rejected the labels foisted upon them and changed drastically album to album, experimenting with elements of soul, funk, rap and gospel. They have consistently managed to adapt, maintain a fanbase and do things nobody else would dare. In Mania’s absolute rejection of genre, common sense and expectation, it’s everything that makes the band special; it’s a pure Fall Out Boy record. Not everyone will love it; but if you’re not willing to give it a fair shot (or five), you don’t deserve it.