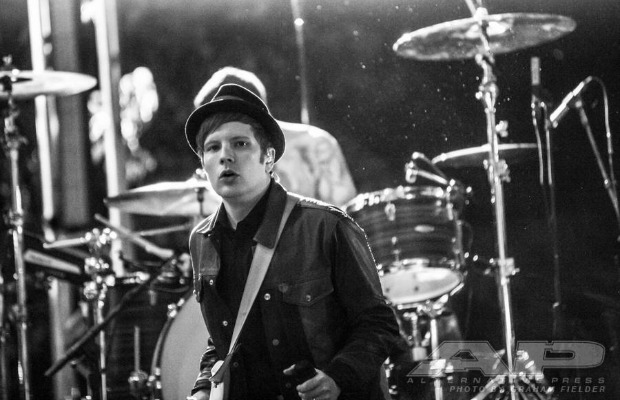 A week prior to the APMAs Monday night, Fall Out Boy’s fans mobilized online to honor the band with the AP Skully award for Artist Of The Year. Jason Pettigrew caught up with frontman Patrick Stump on his way to West Palm Beach, Florida, with the rest of his band after their APMAs win to discuss the award, their future plans and his unerring nerd-love of Saves The Day.

Your bandmate Pete Wentz has this quote about FOB being not necessarily the greatest band in the world, but certainly deserving of being somewhere in the pantheon. Do you think your fan-voted win gives that comment some credence?
[Laughs.] Pete makes the more fun, crazy statements. The coolest thing for me about [the win] was having Saves The Day bring us out after that. Whatever you want to call this scene and our relation to it, that was a really cool moment because of how significant they were to us existing. And in front of that audience, that was so awesome to us.

Liza Grossman, the conductor of the Contemporary Youth Orchestra, was impressed by the band’s decision to play “The Phoenix” instead of “My Songs Know What You Did In The Dark,” simply because you had an orchestra at your disposal.
My gateway into punk rock was ska music. One of the things I always thought was funny was you’d have these ska bands who had a horn section there, and then there’d be songs where they wouldn’t do anything, [because] there’s no horn part. And you think, “Well, that’s kind of a shame.” Bands are always trying to play with an orchestra. I’m a music nerd: I’m not going to not use that? C’mon. And they were great. It was an awesome experience for us. Getting to play with an orchestra is not something we get to do every day.

Considering the break the band took, do you think the APMAs win says something about what you’ve done and what you’re doing now, as well as what could lie in the band’s future? Or at the very least, says something about the kind of passion you stir in your fans?
There’s a sort of validating factor to the whole thing. I will totally own up to my insecurities about where we were when we left; I assumed it was a lot worse than what it was. We needed that time for whatever reason. I think coming back, there was a big fear that no one’s gonna care. Not like we do it for numbers—we do it for the amount of people who care. You’re an entertainer; if you’re not entertaining anybody, then that kinda sucks. [Laughs.] We didn’t want to go out, play the hits and do the same old thing. We wanted to make new music and continue what we’re doing. To get an award like this in our career now is pretty crazy. We’re not the shiny penny anymore. For fans to give us that kind of respect is incredibly humbling.

I’ve gotten to meet a lot of bands and the one thing I think is different about us is that we like each other and we like the people we work with. I think that reads through to everything. One thing I notice when I see our audience is how cool they are to each other and how welcoming the community is. Everybody from our office and management—and even people like AP—we come across we like generally. That’s the really cool thing about getting a fan award—that similar kind of spirit.

What’s next for Fall Out Boy in 2015?
I have no idea. Watching the new Batman/Superman movie maybe? 2015 at the moment is wide open. We’re always working on new music, but I don’t know if anything is happening yet. Hopefully it won’t take four years this time. [Laughs.] This last year-and-a-half was so marvelously busy, and no one expected that for us.

Other than winning Artist Of The Year, what was your favorite part of the APMAs?
Saves The Day. I can’t nerd out about that enough. I would not be singing in an award-winning band if it weren’t for Saves The Day. For them to present that to us was awesome.

Chris Conley was totally beaming when his band introduced your performance. He looked genuinely happy to see FOB win.
He’s the nicest dude ever. It’s no joke: I would’ve been in a few grindcore bands and then disappeared from music forever if I hadn’t stumbled across Saves The Day. I was thinking about it the other day: I feel like in a lot of ways, Fall Out Boy’s success is everybody’s success. alt