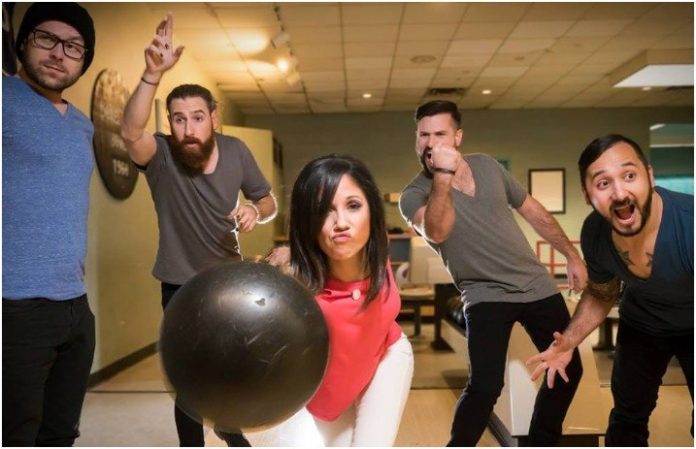 [Photo by: Falling Through April/Facebook]

Read more: Hawthorne Heights reflect on growing up on the road on ‘Bad Frequencies’

“'Seven Tries' is about how to love someone through thick and thin. Life is messy and true love doesn’t come easy. I’ve been given many chances to grow and learn from my mistakes in relationships, those memories and experiences inspired me to write this song.” The band's vocalist, Mikaela Salazar, says of the track.

Salazar continued on to say: “We had the privilege of filming our performance scenes at Catawba Brewery, which was great because we happened to be there the day they premiered a couple new beers, including their Peanut Butter Jelly Time Ale. Gotta show some love to the local businesses! We also filmed at parks in the area, a private room at Dillworths Bar and Grille, and at our guitarist’s, Jim Siani’s home for the Netflix and chill scene… Which we almost lit up in flames! It was all very exciting—the best part was fitting in at least four different intimate dates all in two days. The weather changed up our plans a bit but we made the best of it and it all worked. We hope you like it!”

Watch the music video below:

“Seven Tries” is taken from the band’s latest full length album Zodiac, out now. You can purchase your copy of it here.

In addition to premiering the new music video for “Seven Tries,” the band also shared some behind the scenes photos and videos of themselves during the making of the music video.

Get a glimpse of the band shooting a scene from the video below:

Falling Through April also shared some photos of the making of the video, check out some of the behind the scene shots below: