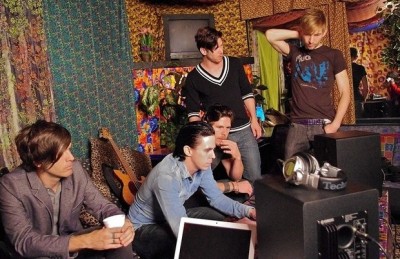 Expect It: “Hopefully August” via TBD

In a certain sense, you can blame AP for the time that’s elapsed between Family Force 5’s last proper full-length (2008’s Dance Or Die) and their forthcoming third album, III. After the Atlanta band participated in the 2009 AP Tour—and saw the hit songs performed by tourmates 3OH!3 and the Maine—vocalist Solomon Olds says he had it in his head that his band also needed a hit song. However, the year and a half he spent writing in Los Angeles reminded him of what FF5 was really about.

“I was like, ‘You know, I don’t live in a top 40 space, I don’t think we ever have,’” he says. “So we scrapped a lot of that idea and just kind of was like, ‘Let’s just make [a] Southern-hip-hop tinged, gritty-sounding wall of music.’ That’s why everybody kind of liked us in the first place.”

Indeed, Olds says that FF5 have revisited their “aggressive roots” on III, although he stresses that the album is musically “all across the board.” That’s an understatement: So far it runs the gamut from “straight-up electro” songs and tunes influenced by their love of hip-hop and club music—“There’s a lot of Rick Ross-influenced type of beats and stuff,” he notes—to “a little bit of redneckness here and there” and songs featuring guitars.

In fact, Olds can’t help but describe these new songs using vibrant, descriptive language. For instance, he says “Can You Feel It?” is “just so huge, the guitars sound unearthly. It sounds like a monster—with teeth and fangs.” In contrast, “Tank Top” is “maybe the sexiest song that we’ve ever made… it’s definitely a club song. I’m sure our rock & roll fans might hate us for it, but dude, I love this song so much.” And “Crash Down” sounds “like it should be on the soundtrack to 300 or something. It’s huge-sounding—it’s got French horns and huge beats.”

The diversity of the album reflects the varied locales where they recorded, places which included a studio in Atlanta, cabins in north Georgia, houses in Los Angeles and even the back of their tour bus. Despite such complexity, FF5 also chose not to work with a producer this time around—a decision Olds is completely happy with. “This is the first time I really ran it by all my band members,” he says. “Usually, it’s me and a producer figuring it out. This time we all sat around in a room and picked out what was cool and what’s not cool.”

The album is lyrically diverse as well. While it does have FF5’s trademark tongue-in-cheek songs, there are several serious detours. One song addresses bassist Josh Olds almost dying because of kidney failure during the band’s 2009 Christmas Pageant tour. Another tune, “Paycheck,” is “super-personal” to the frontman. “We’re just like, dude, let’s be real with the state of America,” Olds says. “It’s talking about the economy now and how it’s affected us as a band, has affected me personally.”

FF5 will head out on Warped Tour for a few weeks this summer. In the meantime, Olds is relishing feeling satisfied with how III turned out. “We tried to make this all about the music this time, and really tried to focus on making great music that humans like, not that a particular genre-type likes,” he says. “Because everybody listens to everything now—we’ve got, I don’t know, 60 years of recorded music history now as Americans. There’ a lot to listen to, so you really have to woodshed and make the best songs possible.”