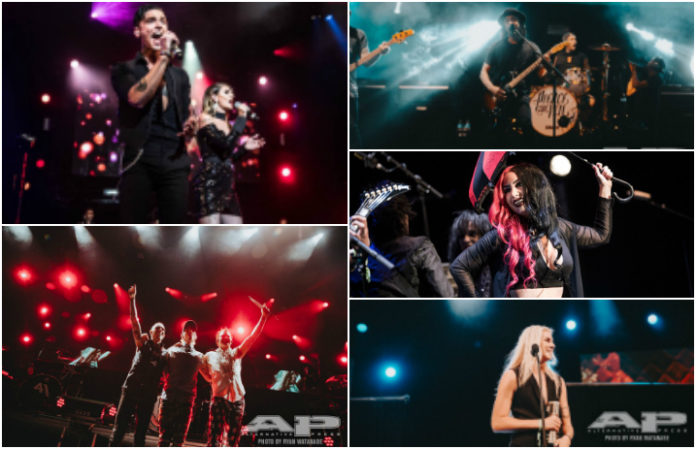 The Alternative Press Music Awards is truly the scene’s biggest night, and fans around the world were able to tune in to see this once-in-a-lifetime event take place. From seeing your favorite artists and musicians presenting awards to more of your favorite artists and musicians, to seeing the likes of Josh Dun and Sleeping With Sirens take the stage to perform our favorite songs, there are so many unforgettable moments that will make the 2017 APMAs a night to remember.

We asked you what your favorite moment of the night was, and we narrowed it down to the top ten moments, as chosen by you.

Waterparks’ acceptance speech (and just Waterparks in general)
Waterparks are not afraid to do the unexpected, which is exactly what they did when they showed up on the red carpet (as shrubs…), accepted their award for Best Breakthrough Band and took to the stage to perform their hit “Stupid For You.” You seemed to love it, too.

Andy Black and Juliet Simms’ romantic performance
Host Andy Black and his wife Juliet Simms took to the stage to perform their Punk Goes Pop cover of Adele's “When We Were Young,” and our hearts melted, just like yours.

The Josh Dun surprise
The Drum Explosion was one of the biggest surprises of the night, and you seemed to love it as much as we knew you would.

I was going to say Josh Dun, but I also really liked Josh DUn. And let's not forget about Josh Dun, he was a-ma-zing!

Pierce The Veil’s touching Chris Cornell tribute
Pierce The Veil performed their hit “Circles,” followed by a heartfelt tribute to Soundgarden's Chris Cornell with their rendition of “Black Hole Sun,” which fans of both bands around the world seemed to embrace.

andy's dumb jokes ����& the chris cornell tribute pierce the veil did, brought tears to my eyes ��

Lynn Gunn’s Best Vocalist win
PVRIS' Lynn Gunn took home the award for Best Vocalist, and you think she was as deserving as we did.

when @LYNNGVNN won the world over