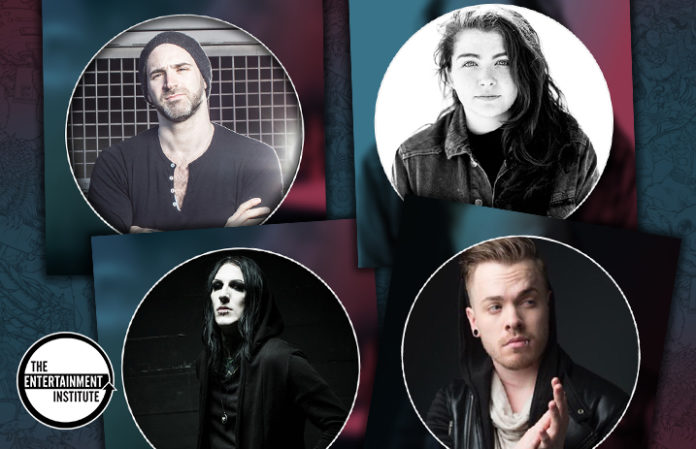 The Entertainment Institute is a firecracker in the revolution of business networking and music education. Started by partners Matt Halpern of Periphery, Kevin Lyman, CEO of Warped Tour and Jen Kellogg, TEI accountant and expert in the concert industry. TEI is a company bringing fans up close and personal with their favorite artists to create awesome learning and networking opportunities. TEI appeals to all facets of the music industry: You name it, TEI has a guru for it.

Before founding TEI, Halpern was the CEO of Bandhappy—a similar on-tour lesson platform. “I started Bandhappy quite a few years back and my focus was always on connecting people in person in some way,” says Halpern, “Whether that be live, online, video chat music lessons or in-person music lessons.” Halpern, an active band member, would reach out to fellow musicians to see if they’d be interested in teaching while on the road.

While Bandhappy had its share of success, Halpern believes TEI lives in its own space. “With TEI, what we try to do is connect people with the artists or professionals that inspire them the most,” says Halpern.

TEI’s focus is connecting people beyond music lessons and concentrating on “bigger picture things,” centered by a more professional approach. TEI gives the guru the opportunity to teach what they truly feel passionate about. “We’re looking for quality individuals who genuinely want to improve […] who want to find a connection with other likeminded people in their community,” says Halpern. “Those are the kinds of people, the kinds of topics and the kinds of interactions that we’re looking for.”  So if you’re looking at a TEI workshop as a VIP pass to ask your favorite singer what size Vans he wears, you’re in the wrong place. Halpern says, “We don’t want to be anything bigger or more glamorous than just the company that figures out ways to connect people for more meaningful interactions.”

Ashley Osborn is a photographer who’s worked with the likes of Lights, Pierce The Veil and Bring Me The Horizon.. This is her first year as a guru, and she’ll be teaching Tour Photography 101. “It’s really exciting that I’ll get to help [the fans] make their dreams more realistic,” says Osborn. She’s been shooting and touring almost nonstop since 2010. But the work’s paid off and it’s as clear as her pictures. “Being able to come in and teach photo from an artistic, music[-oriented] standpoint is so cool because at a normal school a photo class would never teach these kids how to network in the music industry,” says Osborn. “It would never break that side of it down for them.”

FAVORITE GURU TO WATCH: Juliet Simms. “Hearing her speak was inspiring in so many ways,” she says.

Chris “Motionless” Cerulli is the lead singer of Motionless In White. This is his first year as a guru, and he’ll be leading a workshop called “Connect To Create.” Cerulli will be helping fans find new ways to break out of their shells. “I didn’t want to go into it with this mentality that I was necessarily teaching, I just wanna go in and mutually learn,” says Cerulli. The workshops will be organic, straying from the typical teacher-to-student experience. “I really didn’t want people to think that I feel that I’m sitting on this fucking pedestal, that I could look down and ‘instruct’ you cause I’m so fucking awesome and I know the answers to everything,” says Cerulli. “Just because they’re a fan and not an artist doesn’t mean they don’t have wisdom to share, and that’s the perception I want going into it.”

FAVORITE GURU TO WATCH: Atreyu. “I’ve always been a huge Atreyu fan. They’re a band that inspired us very early on, so to listen to what they’re trying to teach will be beneficial to me,” says Cerulli.

Cody Carson is the electric frontman for Set It Off. This is Carson’s second year as a guru. “I am a vet now,” he laughs. “It feels good!” Carson will instruct the workshop “How to Write a Song in 40 Minutes.” “I feel like the real key to learning more about songwriting is doing, so that’s what brought up this class I’m doing for Warped Tour,” Carson said. He’s no stranger to teaching lessons, but attributes something special to working with TEI: “What the cool part about this is, when you’re that age in the process of starting and learning—and just ready to take everything in— you’re probably at the point where if you’re taking that class you might want to be in a band. And we’re at your local Warped Tour… And you might not have a band yet,” he continues, “They might meet their future bandmate there.” Carson is set on bringing more to the table than just songwriting skills: “What I’m trying to bring to the community is team-building exercises, the willingness to collaborate and to put yourself out there.”

FAVORITE GURU TO WATCH: Andy Biersack. “For some reason we’d always have our times slated right near each other,” Carson says, “and I project—so I guess he got distracted, and he’d stop talking and just yell from across the area to me ‘Hey Cody—Wanna keep it down?!’ And just mess with me.”