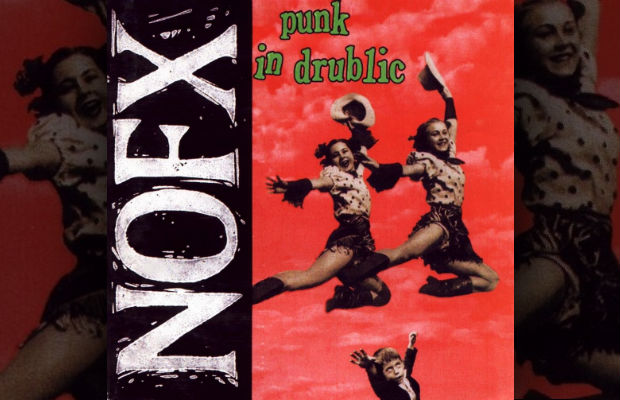 One million records. That's how many copies of NOFX's Punk In Drublic were eventually sold, according to Fat Mike, who proclaimed as much to the website Dream Not Of Today in 2009. It's certified Gold in the U.S. (500,000 copies), but worldwide, the amount of people who lent their ears to the aggressive, exciting opening guitar riffs of “Linoleum” (as well as the silliness of the final spoken-word hidden track that awaits nearly 40 minutes later) reached, at the very least, the seven-digit mark years ago.

Yet mere sales numbers are only the beginning. Why? Because those figures can't even touch the impact the album had on an an entire genre. It was July 19, 1994, when these 17 tracks were first unleashed on a punk scene that was aching for a shot of adrenaline and better yet, a shot of hope. Hope for the future of popular culture, yes, but more than anything, hope for the future of the entire punk-rock ethos as Seattle's grunge wave was dominating nearly every corner of rock radio in America (not to mention whatever form of music television any listener preferred to watch).

More than a decade into their existence, the quartet managed to produce one of the most defining moments pop-punk history would see in the modern day. As AllMusic's Stephen Thomas Erlewine wrote in his review of the album, “With their 1994 album Punk In Drublic, NOFX truly hit their stride… Prior to this record, they merely showed promise, but with Punk In Drublic they fulfilled their potential.”

Or did they? Catching up with Fat Mike today, it's hard to tell if he agrees with any of the legend Punk In Drublic has earned since its debut 20 years ago. “I don't think it's our best album, and a lot of people do,” he says matter-of-factly. “It's weird how it sold way more than any other record. It might be in [my] top five, but … ” His voice halts. It isn't long until he's reflecting on at least two other albums in the NOFX library he considers to be superior than the one at hand.

“So Long And Thanks For All The Shoes, and Wolves In Wolves' Clothing,” he cites as two immediate examples. “I just think those have a better quality of songs. What's funny about Punk In Drublic is that there's not a lot of choruses. The biggest songs on the album don't have choruses, like 'Linoleum,' and you generally don't see bands who write songs without a chorus. I don't think people notice that about NOFX—it's one of our secrets.”

Hefe, meanwhile, has no hesitation before expressing where he believes the set falls in his band's oeuvre. “To me, that was our best album,” the guitarist explains. “That was where we reached our peak. I had no idea that it was going to sell that big. Gold? That was probably the furthest thing from our mind. We were doing pretty good off White Trash, Two Heebs And A Bean. We were making a living. I was thought, 'Wow, this is great, but okay, it's punk music, and how much money can you really make in the punk scene?

“I had no idea what the next step was going to be,” he continues. “We were just hoping for the best. When it did take off like that, I was just like, 'Whoa, whoa, whoa. What is happening?' All of a sudden, we're playing huge festivals all of a sudden with huge rock stars, sharing the stage with Soundgarden, Metallica and Neil Young, and it was crazy. From there, it was like the rollercoaster just took off.”

Perhaps the most lasting consequence of the record, however, had little to do with its actual songs; instead, that prize went to the birth of the band's ongoing collaboration with producer Ryan Greene. Having worked mostly with Epitaph owner/Bad Religion guitarist Brett Gurewitz through their first three releases, Greene brought forth a polish and professionalism to the NOFX equation. (His production credits eventually wound on releases by everyone from Megadeth to Usher.)

The relationship between the two would last all the way until 2006's Wolves In Wolves' Clothing, when Bill Stevenson stepped in for production duties. Looking back on the collaboration now, Fat Mike doesn't hesitate before noting how much the producer would ultimately help shape his band's sound. “We worked well together, very nicely,” he says. “We just seemed to jell, and we ended up working with him for the next 10 years before he moved away. It was the first punk record he ever recorded. He never recorded anything like it, only metal bands, so he definitely helped us sound kind of metal. He gave us a more metal guitar sound.”

According to the guitarist, Greene encouraged the band to embrace experimentation with their songs. The most blatant example came in the form of “My Heart Is Yearning,” one of Hefe's favorite Punk In Drublic tracks. At the suggestion of Kenny Lyon, who played the guitar's calypso patterns for the song, Greene and the band made “My Heart” one of the few NOFX tracks ever to include a steel drum part.

The album's recording process would also prove to be one of the final times the quartet would record without the added element of partying, Fat Mike points out.

There might be other things, too, that some fans may not already know about what went into the making of the record—the addition of Fishbone's Chris Dowd on “Dig” and the hurried recording process that forced everyone involved to shy away from second-guessing too much of their choices, to name a couple—but for the most part, there wasn't too much about the genesis of Punk In Drublic that was different from anything else NOFX had done in the past. It was just another album, both Hefe and Mike say, despite the legend it would go on to earn.

Still, there's no denying the impact it left on an entire subgenre of music that would only grow in scope as the years passed. NOFX went on to record seven more LPs (the latest being 2012's Self Entitled, and even as they talk today, both Fat Mike and El Hefe explain how fun it's become to re-learn the entire record from front to back for a set of shows where they plan to perform Punk In Drublic in its entirety.

“I think we perfected our sound with that album,” Hefe says. “I get fans coming up all the time, going, 'Your music totally influenced my life.' It ended up coming out amazing-sounding. Something magical happened within that time.”

As for Fat Mike's initial skepticism toward labeling the record their highest achievement, well, there's still at least one thing for which he is immensely thankful.

“I like it,” he notes with quick reflection. “I think it's pretty cool. I mean, if it were Heavy Petting Zoo that we were known for, that would be a bummer.”