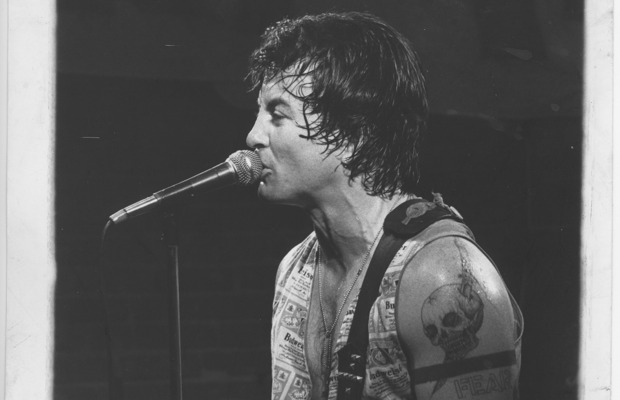 FEAR frontman Lee Ving is one of the prickliest personas from the old-school punk movement. As captured in the classic documentary The Decline Of Western Civilization, the singer antagonized audiences between musically sophisticated blasts of hardcore.

But if Ving were really that guy, he probably wouldn’t have lived this long. Over the years, he’s emerged as an actor and musician with impressive range. As a solo artist, he’s a musical archaeologist who plays traditional interpretations of blues, roots, and country songs. And he has kept FEAR alive in various incarnations.

Ving shows his tough and tender sides in the new Lee Ving/FEAR single, which is being released as a download and vinyl as part of Record Store Day’s Black Friday blowout on November 25. The A-side is Ving’s wistful, subdued take on the holiday classic “Have Yourself a Merry Little Christmas.” The B-side is an old FEAR track, “Another Christmas Beer.” The singer traded emails with AP to tell us about his Christmas jones, punk past and The ReRecord, a forthcoming re-do of FEAR’s classic debut album, which is due in early 2012 on The End.

Exclusive Premiere: FEAR's “Have Yourself A Merry Little Christmas”

The public persona fans associate with Lee Ving, FEAR frontman, is a brusque one. You’ve expanded your image since you were The Fear Guy, but it’s still surprising to see you accumulate a body of Christmas work. Are you a big fan of Christmas?
Yes. And by the way—Merry Christmas. But the accumulated Yuletide tunes—of which I think there are three—was less by premeditation and more a coincidence, buffeted by the winds or “slings and arrows of outrageous fortune that flesh is heir to.” Notice how (Bill) Shakespeare ended this sentence with a preposition.

How did you choose “Have Yourself a Merry Little Christmas”?
My wife and I had recently separated after many years, and as it came closer to the holidays, I started singing it to her.

Why did you choose to end it with the lyrical variation “Hang a shining star upon the highest bow” instead of “Until then, we’ll have to muddle through somehow”?
I sing “muddle thru” (Judy Garland's version) before the harmonica solo and “hang a shining star” (Frank [Sinatra’s] version) in the verse after the aforementioned harmonica Étude. Ya know, so it's like yiz are gettin’ two for the price of one over there.

“Fuck Christmas”–or “[Beep] Christmas” if you have the radio edit—is one of the definitive punk Christmas songs. Long story short, how did the song come to exist?
[It’s] an ancient Druid folk lyric and melody adapted and arranged by Christopher Hogwood and the Academy of Ancient Music and by Sir Neville Mariner and Saint Martin in the Fields Symphony Orchestra.

What’s the story behind “Another Christmas Beer”?
The multi-faceted human dynamic that is Christmas. Aided and abetted by beer.

You’ve always had deeper musical roots than punk-rock, and lately you’re best known for your Americana/roots music. What are some great unknown Christmas songs from that tradition?
1. “Christmas in Philly” by Lee Capellaro and The Sweet Stavin' Chain Blues Band. [Ed. note: Ving played with them in the ’60s].

The single is being released for Record Store Day’s Black Friday celebration. Are you still a vinyl devotee?
I think vinyl has a distinct sound, but I'm at the mercy of downloads like everybody else.

One of your top YouTube clips singing roots songs you singing the “Pittsburgh Stealers/Steelers” song. How did you dig up that one?
“The Pittsburgh Stealers” is a great 1970s country and western (“both kinds of music!”) song by a father-and-daughter singing duo, the Kendalls. Good country-mountain-gospel harmony.

People involved with The Decline Of Western Civilization have polarized opinions about it. What’s your take on the film? Is it rough when people expect you to be the guy from the movie?
I thought Penelope [Spheeris, director] did great and that the movie looked and sounded right. It toured the country, and we toured right behind it. People did expect a re-enactment but then… you know… people… they're the worst. Just kidding.

What’s the situation with Fear re-recording [1982’s] The Record? What’s the lineup? And why do it?
The situation is successful and complete. Lineup is: yours truly, LeeVing (vocals and guitar), Andrew Jaimez (drums and concussion), Paul Lerma (bass), Dave Stark (guitar), Derol Caraco (guitar).

Why? Because we could, of course. But actually because, in addition to many others, these are songs we always play. And so finally this FEAR The ReRecord has the songs recorded and performed in the way that I heard them being presented when I was writing them.