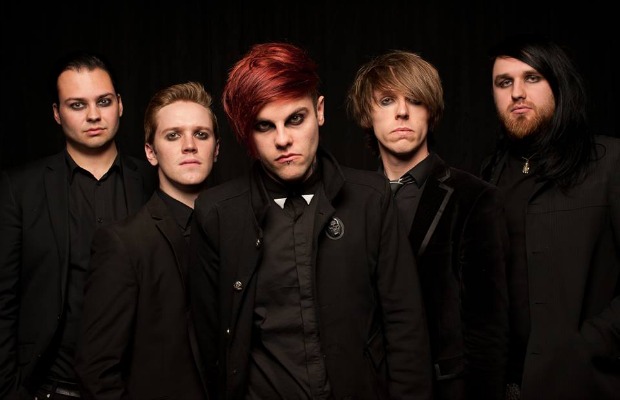 Last fall when we talked to Fearless Vampire Killers and their producer William Control, all parties seemed pleased with the band’s latest work and were ready to move into a more danceable era of the band. But recently fans learned the band weren’t sure  they would be able to even release the album, resulting in their writing two more albums’ worth of material. But why? AP recently spoke to FVK’s dynamic dual vocalists/guitarists Laurence Beveridge and Kier Kemp about what happened in the interim, their new outlook on their music and themselves as artists and what is in store for their fans in the near future.

LAURENCE BEVERIDGE: We were really into the album, and then they made us hate the album. It’s hard to describe how they did it. We were made to believe that what we’d created wasn’t good. Once we realized that wasn’t true, we left the management company. Then we were listening to the album again saying, “This is amazing. How could we [have thought we were wrong]?” But yeah, because of the management company, we then wrote two albums’ worth of material.

KEMP: It’s kind of a good thing, in essence. It was a bit like a path to self-discovery. When you get your confidence dented by other people—these people were literally lawyers, like actually literally lawyers—and then you meet new people, and you start writing new material and really experiment with who you are as a band and what your sound is, you learn what you love about music and how you write together as a band and what you’re capable of doing. So the good thing about this situation is we’ve come out with two albums’ worth of material and the one we did with Wil, which we’re still super-excited about. I think the reason said management company didn’t like it was for all the reasons we explained to you last time. It really is quite bizarre. It’s bonkers. It’s a journey more than just an album. It doesn’t stick to any of the usual conformities. It’s a rock album, but it doesn’t confine itself to genres. We didn’t premeditate anything.

BEVERIDGE: Well, we tried to premeditate it. [Kemp laughs.] Our plan was to write this classic rock album with sing-along choruses, and even when we were writing it, we were thinking, “Well, this is quite normal. Everyone’s going to find this easily digestible,” and then listening to it back now, I don’t know what we were thinking; it’s absolutely ridiculous.

KEMP: I would honestly say, though, this next album is the most ambitious rock album of the last decade. [Beveridge snickers.] Honestly. It’s just bonkers.

Do you think the other material you worked on is going to see the light of day? Would you want to release something that someone pressured you into doing?
BEVERIDGE: Yeah, because we only actually recorded two of those songs fully. We were still writing the songs that we wanted to write, but we were honing our songwriting, and every band needs to do that at some point. I think we weren’t ready to do that, and honestly now, we’ll look at those songs with new eyes or new ears or whatever and say, “What here is us, and then what here is what we should have been doing?” Because what happened out of it is we started working with a really great British producer called Dan Weller.

KEMP: He did LostAlone’s album.

BEVERIDGE: He did Enter Shikari, Young Guns and bands like that, and  because of all of [the management pressure], we ended up working with him. So, through that we met this great producer who we really want to work with. So, we’ve kind of come out on top, even though we went through about six months of misery and had been made to feel like we were rubbish, and it doesn’t even end at the album. We were driven into the ground, like [being told], “You guys are not a band,” essentially. It’s no one’s fault, because we’re a rock band, and they were pop management, and it’s just the way it is. No one was horrible or anything; it’s just we need someone to mollycoddle us. [Laughs.]

Since the last time we talked, did you go back in and revisit the album and change anything, or is it all pretty much the same way you described it to me last year?
KEMP: We’ve had a little more time to really realize the album, so we’ve got little segues going on now, and I feel now when listening to the album that it’s going to be like an actual experience more than just a group of songs. It’s got a lot of little bits, just like ambient sounds and stuff that makes you feel like you’re in a place rather than just listening.

BEVERIDGE: And there are four kind of distinct sections which are almost like really long songs. So in each section there are four songs, and it’s not like they’re all one song, but they all have a similar feel. It’s like telling a story and it helps put people in that mood, I hope, when they listen.

So kind of like acts in a play?
KEMP: Yeah!

BEVERIDGE: Almost exactly that, yeah. Acts of of a play, essentially, yeah.

If you were to describe each “act,” what would you say the feeling is for each of them?
BEVERIDGE: The first act is almost what happened to us where we were chased away from what we wanted to be. The first act of it is a lot about fear and having [to hide].

KEMP: It’s actually pretty strange. This album, we wrote it before, and it’s actually almost turned out to be a premonition for what actually happened to us.

BEVERIDGE: So the first act is [about] hiding and trying to get away from everything and pull everything together and work things out. The second section is us trying to work things out, and it just getting worse, which is exactly what happened. Everyone turned against each other. It was really not a nice time. It wasn’t as bad as it sounds, but it wasn’t good time. We were all really unhappy, and we didn’t know if the band—… Sometimes I’d think, “Is this the end of Fearless Vampire Killers?”

BEVERIDGE: Yeah, and that section there is about our characters doing a similar thing just with more vampire-killing. Next is all about fighting back, sort of taking the fight and building yourself back up again. And the last bit is just a total assault of carnage and war—

KEMP: And that will be the album release! [Laughs.] Fearless Vampire Killers declare war! >>>