Alongside Hank Williams, Bob Dylan is arguably the greatest American songwriter of the 20th century. Last year’s blues-drenched Rough And Rowdy Ways proved that he’s hardly lost any of his gifts in this century, even as he approached his 80th birthday this past May 24. But the minute he walked into New York’s Columbia Studio A on June 16, 1965, bearing a Fender Stratocaster, a Telecaster-wielding white blues guitar virtuoso named Mike Bloomfield and a song called “Like A Rolling Stone,” Dylan left folk music behind and revolutionized rock ‘n’ roll in ways the Beatles could not, despite their enormous, paradigm-shifting success the year before.

He opened his throat before a microphone and howled, “How does it feel?!” And the way rock songs were written changed forever. Writing about how you wanted to hold someone’s hand was over. Now John Lennon intoned from the theme song of the new Beatles film Help about his insecurities, the Rolling Stones snarled about commercialism and sexuality on “(I Can’t Get No) Satisfaction” and the Byrds were jingle-jangling electric 12-string guitars on an edited version of Dylan’s own “Mr. Tambourine Man.” Rock ‘n’ roll was now adult, and it was all down to Dylan.

Read more: 10 punk guitarists who took a unique approach to the genre in the ’10s

He’s never rested on his laurels since, continually leaving behind every successive wave of imitators and idolaters as he’s slipped from country crooning to a few brief returns to his folk beginnings to a fire-breathing gospel turn. He’s enjoyed a still-flowing creative renaissance since 1997’s Time Out Of Mind LP, backed by a self-proclaimed Never Ending Tour only stilled by the pandemic. He’s a subject of fascination for respected filmmakers from Martin Scorsese (2005 documentary No Direction Home and 2019’s Rolling Thunder Revue, another doc about Dylan’s quixotic mid-’70s tour) to Todd Haynes (2007’s experimental biopic I’m Not There, featuring six different actors playing Dylan, including Heath Ledger and Cate Blanchett).

Read more: 10 bands who put the Canadian punk scene on the map

Everyone’s got a little Dylan in them, seemingly. It stands to reason that he’s even influenced the punk, alternative and indie worlds with his dazzling wordplay, sharply drawn imagery and idiosyncratic way with melody.

Veeps co-founder Joel Madden said of the event, “The influence of Bob Dylan’s music reaches out into every corner of the modern musical landscape and is an undeniable piece of our history. It’s safe to say it’s made its way into all of musical DNA. Traces of it can be found everywhere we look and in everything we hear. His forthcoming Veeps show is a huge moment for our platform to celebrate an artist we all admire and respect greatly.”

Tickets for the event are currently available here or at bobdylan.veeps.com for $25. Following the performance, the footage will remain available for 48 hours. In anticipation of what will surely mark the year’s most impactful live experience, here are 11 of the most notable punks, alt-rockers, and indie-ites inspired by Bob Dylan. 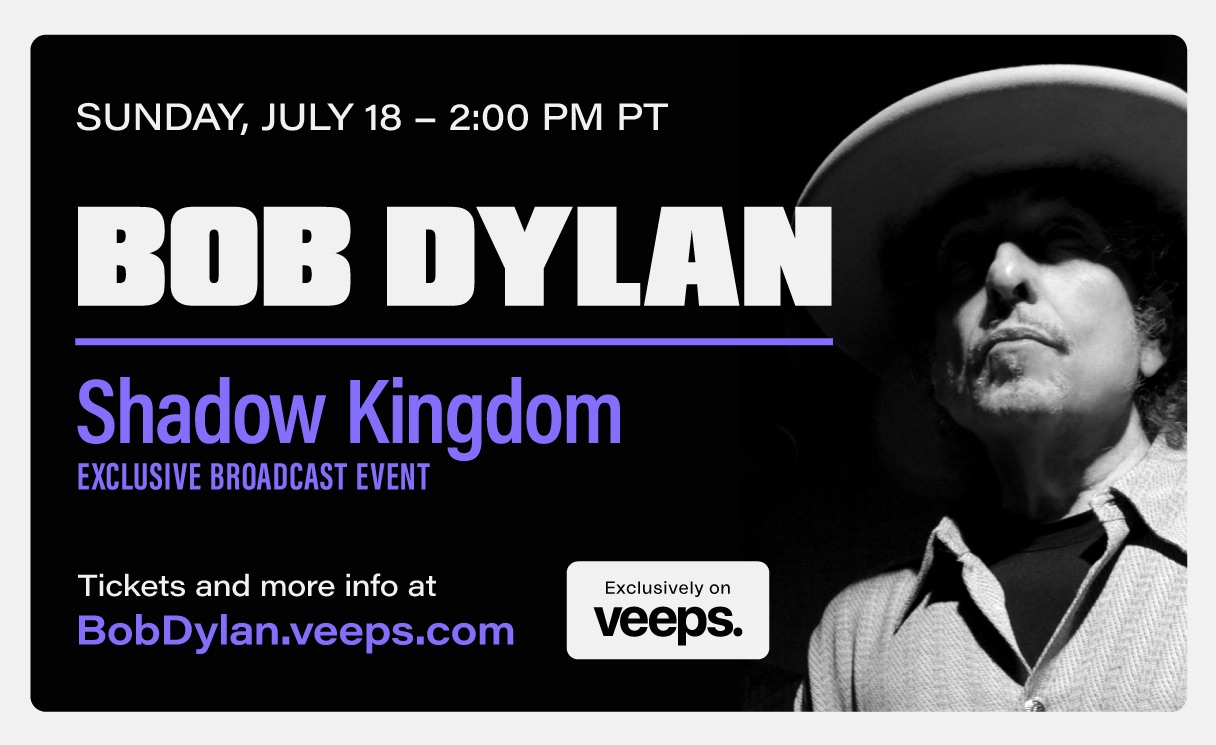 CBGB’s first poet laureate Patti Smith substantially owes the original rockin’ poet of the New York streets. Her “Rimbaud’s in the basement, mixin’ up the medicine” schtick is 100 proof Dylan, to the point where the great man himself enjoyed her 1975 Other End gig, requesting a backstage audience after. Any doubters should audit the majestic elevation of his “Changing Of The Guards,” on Smith’s 2007 covers album, Twelve. What struck many as self-parody on 1978’s Street Legal album became minor-key beauty in her hands, the lyrics wistfully rendering in her quavering alto over a wall of acoustic guitars and dynamic drums.

“Make You Feel My Love” first appeared on Dylan’s career-resetting Time Out Of Mind. An elegiac torch song dominated by his ravaged vocal, it’s been performed by over 450 artists—everyone from Garth Brooks to Michael Bolton. British pop-soul singer Adele now owns the song with the rendition she cut for her 2008 debut album, 19. Initially resistant to her Dylan-fan manager’s insistence that she try her hand at it, she didn’t want anyone thinking her incapable of writing enough material for her first album. She relented, offering a piano-and-voice take that’s placed twice in the U.K. charts, years apart.

View D.A. Pennebaker’s 1966 footage of an angry and wired Dylan confronting an unsympathetic British audience with 110 dBs of “Like A Rolling Stone.” Now play it back to back with 1978 Richard Hell bobbing and weaving like a jagged, exposed nerve onstage at CBGB, yelping “Love Comes In Spurts.” Dylan invented Hell. Not that he’d admit it at his trajectory’s dawn: Dylan experienced a creative nadir that led the younger performer to reject his elder as yet another ’60s burnout. Yet, he found something engaging in the charred husk of 1974’s “Going, Going, Gone” to attach a funereal rendition to 1982’s Destiny Street.

Across their career trajectory, six-string subversives Sonic Youth set their stall as ambassadors from ancient bohemian New York to all of the modern world. Meaning that scratchy copies of Highway 61 Revisited and Blonde On Blonde lurked somewhere near well-thumbed editions of Howl and old Velvet Underground demo tapes in their mental warehouse. Hence, it was a no-brainer for Todd Haynes to request they remake the unfinished Basement Tapes-era demo that provided his experimental biopic I’m Not There’s title. The mass of alternate-tuned guitars create a wall of sound, cushioning Thurston Moore’s burnt, hollow rendering of Dylan’s forlorn lyric.

There was a good reason the world embraced the White Stripes far tighter than they did any other early 2000s garage-punk outfit that went mega after the Strokes kicked open the door. Jack White didn’t set out to merely bash fuzzed-out chords as Meg White pummeled primordial beats. He was a student of great American songwriters, be it Hank Williams or Hoagy Carmichael. Hence, it was natural that their self-titled 1999 debut contained a stomping, blasting take on Dylan’s mordant 1976 musing on mortality, “One More Cup Of Coffee.” The overwrought original paled next to the Whites’ reverb-drenched squall.

Remember the opening sentence of that Clash blurb two bands back? “It stands to reason that anyone rocking social protest lyrics owns a Bob Dylan record or two.” This certainly explains the grievous bodily harm that leftist metallic rap-rock unit Rage Against The Machine performed on “Maggie’s Farm” on 2000’s Renegades. A working man’s electric-blues howl at vicious employers in Dylan’s original, RATM applied Tom Morello‘s 50-ton guitar work and creepy-crawl funk beat to the song, as Zack de la Rocha opens his throat wide. The final touch: a two-note guitar hook resounding throughout like an emergency services siren.

The band who soundtracked this century’s first decade by combining old-school punk with Queen’s dramatic streak, goth spookiness and comic book campiness would hardly seem like Dylan’s biggest acolytes. Yet when Watchmen director Zack Snyder required a soundtrack version of “Desolation Row,” the Highway 61 Revisited track whose lyrics named the chapter (“At Midnight, All The Agents”) of the comic book that inspired the 2009 film? He called My Chemical Romance. Dylan’s 11:21 acoustic slum life chronicle became a 2:59 Sex Pistols-esque bomb blast, visualized with a Snyder-directed clip depicting the band performing it before a riot at a punk club.

On 1975’s Blood On The Tracks, an album widely considered a return to form, “You’re Gonna Make Me Lonesome When You Go” resembled an outtake from one of Dylan’s early folk LPs, all urgently strummed acoustic and wheezy two-note harmonica. His official website claims he’s only performed the song live 12 times, but it’s inspired remakes by everyone from Elvis Costello to Raul Malo. Miley Cyrus cut a countrified version with Johnzo West for Amnesty International’s Dylan tribute benefit collection Chimes Of Freedom. Her Tennessee upbringing as country singer Billy Ray Cyrus‘ daughter clearly brought out the twang on her rendition.

Everyone from Jimi Hendrix to Shakespearean-trained British thespian Sebastian Cabot has taken a crack at “Like A Rolling Stone.” It seems like a thankless task, tackling a song so revolutionary and profoundly identified with its originator. Yet, one of the most unexpected renditions of Dylan’s ultimate anthem—about a young socialite fallen into hard times on the streets—came courtesy of Green Day. Recorded as a bonus track for the deluxe preorder edition of 2009’s 21st Century Breakdown, it sounds like the original recording pumped through a wall of Marshalls, Billie Joe Armstrong’s snarl replacing Dylan’s. It’s damned good.

It stands to reason that anyone rocking social protest lyrics owns a Bob Dylan record or two. Of all of punk’s political wing, the Clash clearly owed him the most substantial debt. They weren’t just screaming “Fuck The Queen!” Or “Nuclear War Sucks!” Joe Strummer wrote poetry to Mick Jones’ enormous tower-block chords. They never directly covered Dylan. Instead, they offered a pastiche called “Groovy Times” in 1979, featuring Jones mimicking that wheezing two-note harmonica style, credited as “Bob Jones.” Dylan paid close attention to the Clash, once bringing his then-teenage son Jakob—years away from Wallflower-hood—to an early ‘80s gig.

“Don’t Think Twice, It’s All Right,” Dylan’s 1963 gentle yet embittered farewell to a longtime love, is yet another oft-covered evergreen. Everyone from Johnny Cash to Burl Ives, even Mike Ness, has tried their hand at it. But would you believe Post Malone did, too? The award-winning hip-hop star of “Circles” fame has paid his respects to Dylan in the press a few times. He even sports a tattoo of his likeness. But the connection became direct when the 2013 clip above surfaced from his pre-SoundCloud rap days, performing a tender, faithful take on “Don’t Think Twice” under his original name of Austin Richard.