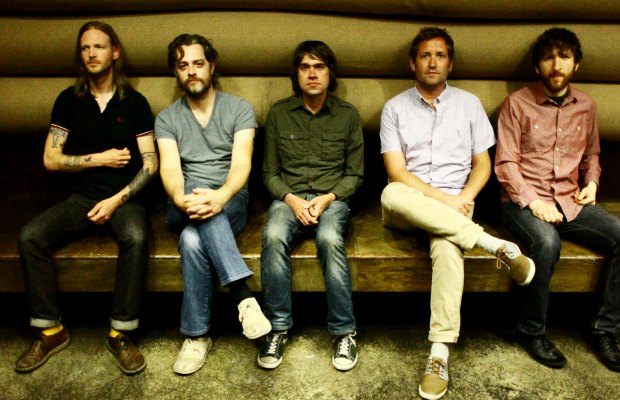 Their songs may make you want to get out of your seat, but for their new album, MINUS THE BEAR had to get out of themselves to rediscover their voice.

It’s an otherwise humdrum Thursday night in late June, and AP is trying to pin down the members of Minus The Bear at various points throughout the band’s hometown of Seattle. While we catch drummer Erin Tate and singer/guitarist Jake Snider chilling out at home, our only connection to bassist Cory Murchy seems to be the repeat plays of Willie Nelson’s “Always On My Mind” we get over his voicemail. Meanwhile, when we reach them, guitarist David Knudson and electronics operator Matt Bayles are performing in front of a green screen on the set for the band’s first-ever music video. Finally, Murchy rings us back from somewhere else in the city, and fills us in on his own hectic schedule. “I go to the set tomorrow, and we’ll do some group stuff, and I think I’ll do my stuff later,” he says excitedly. “I don’t really know what to expect, this being [our] first video and everything, but I think it’s in capable hands.”

The video is for “The Game Needed Me,” the first song off Menos El Oso, Minus The Bear’s new, second album for the Seattle-based indie Suicide Squeeze; and the shoot, along with a lot of the business surrounding the disc’s release, marks the first time in four years of playing together that the quintet have turned over so much of their public image to outside handlers. Though they’ve built the sort of reputation most bands require a marketing campaign and a mile-long MySpace friends list to brag about, Minus The Bear have done it on a DIY level, letting their music do the talking and their audiences do the bragging for them. Or, as the band’s booking agent, Susanne Dawursk of Chicago-based Flowerbooking puts it, “They’ve always been the little indie-rock band that could, in the face of an industry that has completely turned sour…. They are the next Death Cab For Cutie in the wings-developing slowly, surely, away from the grind, and developing their own way.”

Granted, it’s easy to get people to take your band seriously when you’ve got the benefit of history. As everyone who’s written about the group is fond of repeating, Minus The Bear’s collective résumé includes time in Pacific Northwest underground rulers like Botch, Kill Sadie, Sharks Keep Moving, These Arms Are Snakes, Onalaska and others; meanwhile, Bayles is a respected producer (Norma Jean, Mastodon, the Blood Brothers) who’s about to start work on the new Underoath album. But strip away their pedigree, and it’s still hard to question Minus The Bear’s ability to amaze: There is, after all, no band on Earth that sounds quite like them.