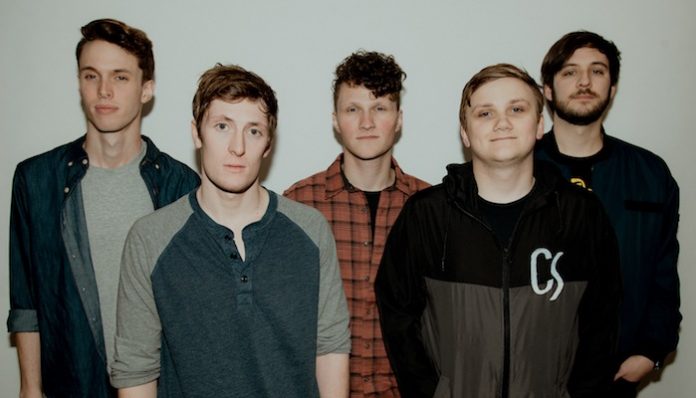 Fernway dropped their debut EP, An Ache For Distant Places, in April 2018. They spent 2019 touring and sharing their music with the world, releasing a few songs along the way. Now, the pop-emo outfit are teaming up with AltPress to bring you their second EP, Welcome To The Ground.

The New York-based group shared several singles from the release over the past few months. This included “Half-Life,” “I Have To Return Some Video Tapes” and most recently “Big.Bad.Ugly.”

Filled with alluring vocals, the EP is an exploration into the band’s growth since their inception in 2017. Comprising five musicians—vocalist/guitarist RJ DeMarco, drummer Tanner DeMarco, guitarists Jonah Wrest and Brett Robertson and bassist Alec Dube—each artist brings their own ideas and inspirations to the table to create a cohesive album.

Your sound is almost the 1975 meets Jimmy Eat World with a touch of jazz. Who are some of your favorite artists, and do they influence what you create?

The sound we create is purely developed by our wide pallet of influences.

JONAH WREST: I The Mighty are a band that always hold my attention because of their rhythmic energy and experimentation with ambient landscapes. Another band that influence my writing and playing is Young The Giant. I’m always inspired by their songwriting and direction, as well as overall groove.

BRETT ROBERTSON: One band that influence my writing and playing is Aerosmith. I love the dynamic duo of Joe Perry and Brad Whitford and how every riff they write is a unique ear worm. I’ve also been listening to a lot of Ghost lately. I really connect with their orchestral influence and how it plays into the songwriting and production.

Read more: The 1975 enter a digital meme realm in “The Birthday Party” video

TANNER DEMARCO: For me, it goes from bands like Forever The Sickest Kids, Fall Out Boy and the Maine. Lately, I’ve been listening to artists like Pale Waves and the 1975. The way the 1975 writes and perform is so unique. I love how they genre-bend across multiple albums. These bands absolutely shaped how I play and write across all spectrums of music.

RJ DEMARCO: I grew up listening to a lot of older music. I’ve always had an appreciation for jazz, specifically artists like Miles Davis and John Coltrane. Their approach to playing music was constantly evolving and sharpening, and it’s something I’ve always looked up to. I also love to listen to John Mayer. His songwriting is so familiar but also very thorough and engaging.

ALEC DUBE: I feel that my biggest influences are the albums and artists that I’m listening to [and] transcribing at a given time. They’re constantly changing, but more often than not, I’m listening to a lot of jazz and progressive rock. Most recently, Gilad Hekselman, Stefon Harris, Chick Corea, Louis Smith, Childish Japes, the Dear Hunter, Time King and Hiatus Kaiyote.

“I Have To Return Some Video Tapes” is a quote taken from American Psycho. What inspired you to use that as a track title? Are there any other Easter eggs hidden in the EP?

RJ: American Psycho is one of my favorite movies because it really makes you think. After seeing the film a few times, I started to notice that Patrick used the phrase “I have to return some video tapes” whenever he was in a stressful situation, almost as a cheap excuse for why he had to leave. “I Have To Return Some Video Tapes” was written about how people make excuses for poor communication, and the name just seemed so fitting.

As far as Easter eggs throughout the EP, we like to add a lot of instruments to our productions because we all have fun experimenting with new textures and sounds. This album was recorded at my studio in Hamburg, New York, next to my father’s mechanic shop. One day Alec and I went roaming around among the shop to see what interesting objects we could find to use as percussion. We grabbed five or six things, brought them back into the live room and Alec started banging on them with railroad spikes. We layered those percussion sounds all over the album. You can hear them very prominently as a drum texture in our single “Big.Bad.Ugly.” I tracked some saxophone on the extended outro of “I Have To Return Some Video Tapes,” and Alec also tracked some ambient vibraphone on the intro to “Sweet Joy” and on the outro of “I Have To Return Some Video Tapes.”

“Half-Way” and “Endwell” have big swells, and the instrumentation really shines. Your main idea behind the EP is the band’s growth and progression over the past few years. How have you progressed sonically and in how you approach writing? Did you try anything different in the studio?

ALL: We all strive to be better musicians tomorrow than we are today, and when you have a group of musicians who are constantly trying to home in and improve their sound, the sonic improvements will come naturally over the course of time. As far as writing, it’s always about being able to express what you are feeling in any given moment. If we are all changing as people, our ways of writing will probably adapt and evolve too.

Could you walk us through your writing? How do you think Welcome To The Ground differs from An Ache For Distant Places?

ALL: On the newer recordings, we incorporated a vast variety of electronic sounds, including a drum pad and various synths, into our sound. The songs were all written with a “big” arrangement in mind, meaning we were constantly experimenting with adding different sounds and layers to see what we could come up with. For our first record, the songs were written more outside of the studio, because during that writing process, we didn’t have much of a studio. When we finally had the means to record An Ache For Distant Places, the songs were very much done, and any adding that we did as far as extra sounds and layers was purely unintentional. We were just playing around with various pieces of guitar gear. This time around on Welcome To The Ground, we knew that we wanted to incorporate extra sounds and layers, so we became more intentional with what [they] were going to be.

Which track stands out to you the most on this new EP and why?

RJ: “Sweet Joy” stands out the most to me because it is a much heavier song than I ever anticipated to write. My favorite part is hitting the bridge as a whole band. It’s a very powerful sound, and I love the feeling we were able to create on the record.

ROBERTSON: “Endwell” stands out to me because of how different the pace is compared to our other songs. It is very intimate and exposed.

WREST: I think “Endwell” is a vocally driven song, which is something we don’t normally do. It speaks at a different level than the other songs given its exposed verses and dynamic swells and expression.

TANNER: “I Have To Return Some Video Tapes” stands out to me simply because it’s one of the first songs we’ve given that “four-on-the-floor” feel. It’s very pop-like but still maintains the alternative vibe to it.

Read more: Bring Me The Horizon take a break from writing to prank Oli Sykes’ mom

DUBE: Of all of our tunes, “I Have To Return Some Video Tapes” really stands out to me. I relate to these lyrics the most, so it’s always the most meaningful for me to play [and] listen to.

What are your plans for the rest of 2020? What can fans look forward to this year?

ALL: For the rest of 2020, we will be looking to promote our new EP in any way that we can through touring and online presence. We are also in the process of writing for our next release, with new songs scheduled to release for the summer.

Listen to Welcome To The Ground below.

What’s your favorite song on Fernway’s Welcome To The Ground EP? Let us know in the comments below!