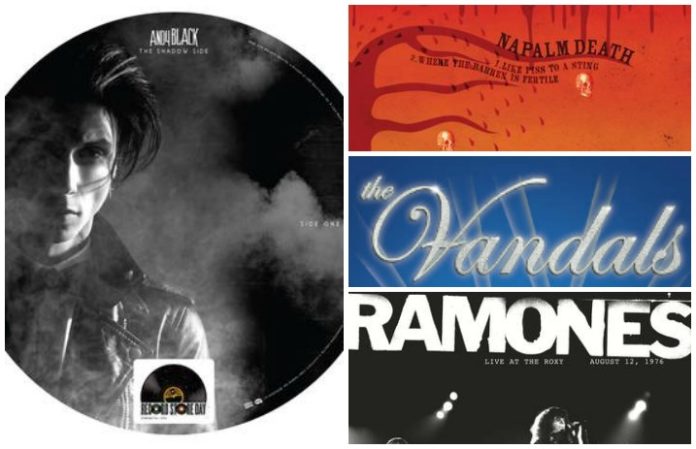 Holidays should be treated as sacred moments to be with family. But sometimes you don’t want to hear your visiting aunts and uncles talk about the election with mouthfuls of mashed potatoes and stuffing and watch your mom throw shade at everyone for not helping out with the traditional meal. Now, we’re not gonna tell you to skip Thanksgiving to wait in line overnight at a big-box store for a deal on a flat screen TV. That’s because we want you to come out and wait in line with us for some cool records for this year’s Record Store Day Black Friday (Nov. 25). So fill your sleeves with Mom’s stuffing and put sandwich bags of hot coffee in your inside coat pockets. It’s getting cold outside, but the wax inside your fave record store is pretty feckin’ hot…

The Shadow Side picture disc (REPUBLIC/UNIVERSAL)

Andy Biersack’s 2016 solo vehicle outside of Black Veil Brides features the participation of folks from 5 Seconds Of Summer, My Chemical Romance, All Time Low, Less Than Jake and more. Now Universal have embedded a cool photo of Bier-Black into some grooves for maximum collectability. (Does anybody actually play these things?)

Hip-hop agitators of the highest DGAF order, Death Grips will have their two instrumental releases conjoined in one package for maximum beat fury. If you care, don’t dally and set your alarm: We still see dudes grumbling about how much copies of the Grips’ 2015 Black Friday vinyl release Government Plates go for at auction.

The godfather of punk, Mr. Iggy Pop and the reformed Stooges laid waste to Tokyo in 2004, and they had a digital recorder fortified with extra steel and rivets to make sure the thing wouldn’t melt while collecting the legendary punks’ sonic maelstrom. Pressed on some 180g red and white vinyl that will scare your phonograph stylus. Don’t play it on a Crosley; Telluric Chaos might make it weep uncontrollably.

Vocalist Maria Brink’s metallic marauders have their defining 2010 album reissued on a wicked 12” green ’n’ black-splattered slab of wax. Man, if you can’t get down with “The Gun Show” on any kinda vinyl (or color-free soundfile), I don’t know what to tell you…

More Thoughts That Float On A Different Blood 7-inch (VAGRANT)

British grindcore progenitors Napalm Death team up with Japanese electro-thrash duo Melt-Banana for four tracks of sonic otoplasty dressed up in a picture sleeve rendered by Mackie Osborne. The Deathly ones deliver two slivers of furious rockin’ skree (“Like Piss To A Sting,” “Where The Barren In Fertile”) while the Japanese thrash ’n’ chat delegation contribute two tracks with similarly ridiculous titles (“Killer Garden In The Bottle,” “Sakura Spiral”). (And if you saw Napalm Death on their recent trek across America earlier this month, you could’ve picked this baby up at the merch booth weeks in advance. —vinyl insider trading ed.)

To pique the desires of the Bright Eyes founder’s fanbase, Nonesuch offers up this wax jewel. You get a full-band version of “Tachycardia” that was left off Oberst’s recent austere full-length, Ruminations, as well as the non-LP B-side “Afterthought.” And only you and 2,999 of your best friends will be able to get it.

The New York punk icons are celebrated with a 180g compilation of the high points of two gigs at the legendary LA club. If your dad’s cool, maybe he’ll wait in line with you outside the record store to get a copy. Maybe.

This six-song mini-LP was recorded live at various intervals during the influential Swedish hardcore band’s 2015 tour. Take note, completists: They added “Stolen Voices” (from the Japanese CD pressing of Freedom) on here so you can stand in line clutching your wallet like a stress ball in massive anticipation to get into the store.

The 2004 release from Joe Escalante’s LA punk squad enjoys its debut vinyl pressing on v. cool blue vinyl, and is fortified with the inclusion of “Steal The Flag,” a track only previously available on the international pressing of the CD. Now get your fat, lazy ass off the couch and support your local record store! (Vandals fans get this reference. AP would never willingly shame anyone whose family has kickass meals this holiday weekend. —nutrition politics ed.)