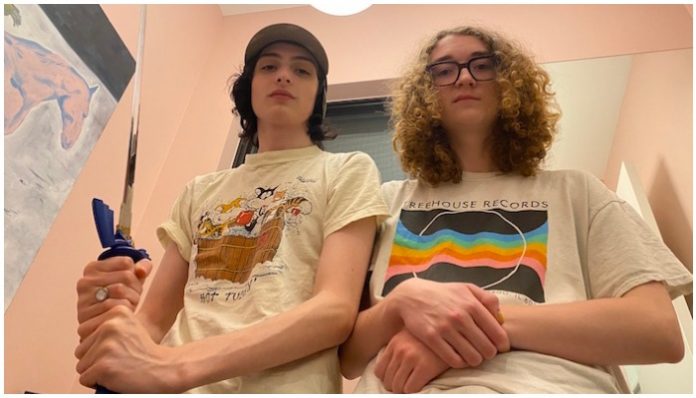 After nearly a year in lockdown, Finn Wolfhard and lifelong friend and bandmate Malcolm Craig haven’t let COVID-19 stunt their creativity. To kick off the new year, the Aubreys’ Wolfhard and Craig eagerly released their debut collaborative track “No Offerings” featuring Lunar Vacation. While the duo were able to safely record the track together, they made the decision to get innovative when it came to the creation of the music video.

While “No Offerings” is “not a Christmas song,” Wolfhard took the advice of his friend Clay Frankel to edit a public domain video and create something entirely new and different. If the doctored video looks familiar, you may recognize it from around the holidays during your childhood as the 1936 Color Classics cartoon Christmas Comes But Once A Year. However, after Wolfhard inverted the colors and Frankensteined the footage, the video offers a haunting innocence that perfectly complements the track.

We spoke to Wolfhard on the creation of the “No Offerings” visual. Watch the video and check out the interview with Wolfhard below.

Can you tell us about any challenges that you faced while creating the “No Offerings” video and what your artistic inspiration was behind it?

Well, I really wanted to do a video for the song. So I was thinking like, “How can I get around that and do something artistic?” So I did a bunch of research on public domain [and] stock footage that I could use that song, too. But I think always when people use stock footage, it’s a little whatever. It doesn’t really have a lot of artistic integrity, I guess.

So I ended up finding something with this old Christmas cartoon that is incredible. It’s just this creepy little cartoon character. And it’s not a Christmas song. But there was this Christmas cartoon that had this weird tone to it, almost like this dark tone, kind of how our song is. Our song is pretty melodic but also has this dark thing. So I took that video, and I just had it because it was so long ago in the public domain [and] anyone could use it. I was struggling with it for a long time because it looks pretty Christmas-y. The colors were pretty Christmas-y. I was talking to Clay Frankel, who’s a friend of mine and one of the lead singers in Twin Peaks as well. And I showed him what I had. He said, “You have the power of the edit. Why don’t you just completely mess it up?” And I said, “What do you mean?” He said, “Just invert the colors. Just do anything to make it look weird and scary.” And I did. And the minute I inverted the colors, we both started laughing so hard because there’s a completely different video now. And so, we made this a little nightmarish twist on this old ’30s Christmas cartoon. It’s creepy, but I’m really proud of it.

Now that you’ve Frankensteined this video, do you feel as though the visuals match the context and the message of the song?

Yeah, absolutely. We were all cold on it too because when the colors weren’t inverted and it was just the song or just the cartoon with no changes to how it looked, we were all like, “I don’t know. It just seems more like a Christmas-y song, and we don’t want it to be a Christmas-y song.” The minute I inverted the colors and made it look a little nightmarish, it was great. The cartoon is basically these little orphan kids getting Christmas presents, and it’s a really cute video. And then once you invert the color, it still looks cute because they’re little orphan kids, but it’s also nightmarish at the same time. Our song is really melodic. It has this melodic thing going on, [but] it also explodes and has the nightmarish thing going with the slide guitar and everything. So, I’m really proud of it, and I am excited for people to see it.