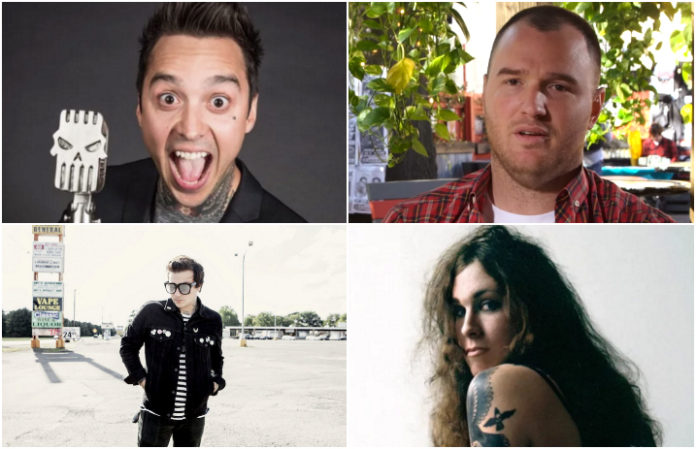 Hey, we all gotta get started on our craft somewhere, and that’s not always playing the most intricate riff. These might not be “Hot Cross Buns,” but here are the first songs your fave guitarists learned to play.

Laura Jane Grace, Against Me!
“Ode To Joy” by Beethoven, or at least a really simplified entry-level player adaptation. I started taking lessons when I was 8 years old, so that's what was fed to me even though I wanted to be playing rock ’n’ roll. Not a bad place to start by any means, though.

Frank Iero, Frank Iero And The Patience
Well, it wasn't really a full song, it was just a riff. It was the main guitar line to the Peter Gunn theme song. I think my guitar teacher at the time taught me it to show my parents I could actually play something they could recognize, but I had never seen the show or heard the song before that, so I was much less impressed.

Chad Gilbert, New Found Glory
From what I can remember, I feel like the first song I learned to play on guitar was “Come As You Are” by Nirvana. It was a pretty easy song to learn, and their Nevermind album came out when I started to play guitar.

Dave Baksh, Sum 41
First song I learned to play was “Caught In A Mosh” by Anthrax from Among The Living.

Tony Perry, Pierce The Veil
“Dammit” by Blink-182. I actually learned it before I even owned a guitar. I just had friends around the neighborhood who had guitars: I'd try and go to their houses and ask for them to try and show me stuff, and that was the first one I figured out.

Reba Meyers, Code Orange
I truly can’t remember first guitar songs, but I know my first two on bass and they were [Rage Against The Machine’s]  “Killing In The Name” and [the White Stripes’] “Seven Nation Army.” Easy songs to learn by ear.

Isaac Hale, Knocked Loose
When I was growing up I was so concerned with playing certain parts, not full songs. It took me way too long to learn full songs by themselves because I always did it by ear. It was definitely an old Metallica tune. Probably “Jump In The Fire.”

Awsten Knight, Waterparks
Deep Purple’s “Smoke On The Water,” duhhhhh! The first guitar solo I tried to learn was “The Hell Song” by Sum 41, but I got frustrated and quit. The first full song I think I got was “Holiday” by Green Day and was way too stoked when I got that solo down. I probably played it 800 times.