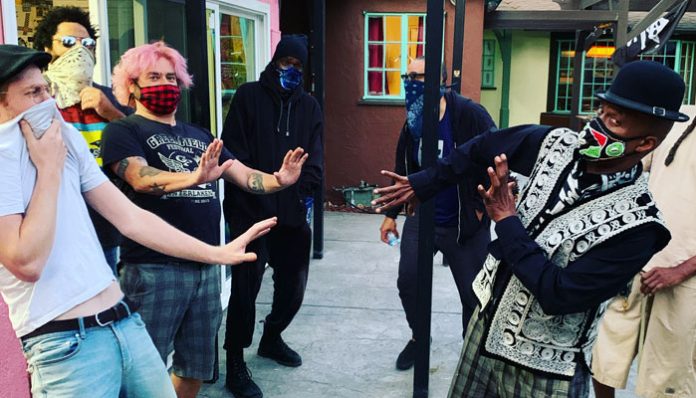 Fishbone keyboardist, trombonist and songwriter Chris Dowd is describing a creative miracle: hollandaise sauce. “You’re taking an egg and some olive oil. Two components that wouldn’t mix together,” he explains, “but you whisk it together a certain way, and that causes it to bond.”

Dowd, who studied at the culinary school Le Cordon Bleu earlier in the millennium, is a serious chef. Yet, he admits the recipe he describes could be a metaphor for other art forms, as well. “Same thing with music,” Dowd acknowledges. “The same thing, especially, with Fishbone.”

Read more: 20 Black musicians throwing down in hardcore and metalcore

Since their formation in Los Angeles in 1979, Fishbone’s strength has been their mashup of volatile components. The punk energy and pumping ska pulse of 2 Tone. The guitar heroics of metal. The elastic grooves of R&B. But the band members themselves—who have regrouped after years of disagreements, lawsuits, major-label disappointments and replacement musicians—can be equally hard to blend. Dowd’s 1997 song “Flog Your Dead Horse,” a frustrated attack on Fishbone recorded with his band Seedy Arkhestra after he left the group, is a case in point. Now that everyone has reconciled, he admits, no one brings up the track. (“We just leave it right there,” Dowd says with a laugh.)

The sound of the as-yet-untitled album, Dowd says, is still evolving. (“TBD. I swear to God…I couldn’t call it.”) But not surprisingly, especially given current events, he reveals that it will be “very political. To be frank, I saw this shit happening when this dude was elected president,” he says of Donald Trump, encouraging fans to vote. “If I’m gonna be even more frank than that…for people of color, this shit’s been a bridge too far for a very long time.”

Norwood said a couple of years ago when you rejoined the group that you were the missing element. How did you end up coming back? It seems like you might have had a more difficult path than some of the other guys.

CHRIS DOWD: [Laughs.] If that’s your way of saying I’m a stubborn fuck, you’re absolutely right. When I quit the band [in 1994]…at the time, I thought it was for one reason. I didn’t think I was being heard. The general “creative differences.” And even coming back, I realized, “Man, we still have creative differences.”

But I’ve had some friends look at me over the years and give me that look like, “Do you know what fucking planet you’re on?” And these are people I respect. At the time I left, I didn’t know how to express myself. It was definitely as much me as it was anybody. So you get older, and you approach things differently. You communicate better. And you get better results. Hopefully, we all get there. Some of us don’t. The president clearly didn’t get the memo.

Was there one guy who convinced you to return?

Was he the only person who could have done it?

Yeah. You know, because of how the rift all started. He was one of the people that I needed to have that come-to-Jesus moment with.

I can’t speak for everybody else’s band—or maybe I can—but you have to sacrifice so much to be good at music. Time away from things that, at the time, you don’t think are important but are very important. And it can be…lonely, and it can be just emotionally devastating to relationships. It’s a lot. To come back to that…it was serious. And it’s not perfect by any stretch of the imagination.

Probably the thing that Fish said to me that made me go, “OK, you’re right” was, “It’s our legacy. And we have to man up and do what we need to do.” And it’s no disrespect to the times when they were making records without me. But that’s just not Fishbone.

What we’re about to do now is the closest to Fishbone that it has been in a very long time. We wanted Kendall to be in the band. Tried really hard. But we’re just in different places. And Mark [Phillips, guitarist] should have been the original dude to be there, besides Kendall, in the first place.

Some producers are like engineers: You hire them because you want their sound, or at least their expertise with sound. And some are like diplomats: Their job is to keep everyone working toward the same goal. Which of those best describes Fat Mike on this project?

Definitely diplomat. But I will say this: It’s a combo platter, too. He’s definitely got strong opinions about what he is and isn’t feeling. But we definitely have strong feelings about what we are and aren’t going to be bargained with, too. [Laughs.] I feel like Mike is doing this Fishbone album going, ‘What the fuck was I thinking?” For real: It’s a six-headed monster.

On Fishbone’s Twitter account, the sound of the new songs has been compared to the first EP. Was this the objective going in or just how things have developed?

I’ll put it this way. You could wake up and wanna listen to Black Flag’s Slip It In. Then you turn on the TV and you see the orange dickhead, and you’ve got a new song. Is that “Ugly” Part II? I don’t know!

I will tell you this: It’s definitely going to be very political. But we’ve been singing about this shit for a very long time. We wrote songs like “Change.” And you sing about this shit, and you watch it fall on deaf ears. And at a certain point—and maybe this goes back to why I left the band—you just start to doubt your ability as a writer [and] as an artist. You know what I mean? Sometimes I look back, and I’ll be honest with you, I wonder if the shit we did was good enough. Maybe it wasn’t. Either a song is fucking transcendent or it isn’t. Maybe as good as I think I write, it wasn’t. I don’t fucking know.

I’m going to have to contest that point. But speaking of success, what would make this new album successful for you?

Probably another silly question, under the circumstances, but is there an ETA for the album?

The only way I can respond to that is in song. Hold on. [Runs to get an acoustic guitar, then sings the beginning of the Five Stairsteps song “O-o-h Child.”] Trust me, as much as you would like to hear it, I would like to be done with it.